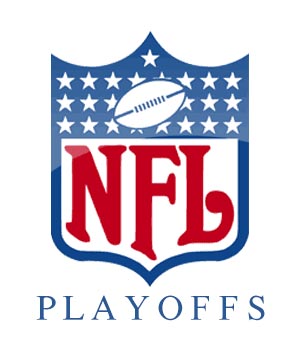 While absolutely no football fan EVER wants to see the NFL season come to an end, the NFL Playoff odds offer an incredibly exciting way to top it off, culminating with betting on the Super Bowl each February. We can't think of a better way to celebrate the conclusion of the season than betting on the NFL playoffs and raking in massive payouts.

Determining where and how to place your bets on this year's NFL Playoff games can be a bit daunting with the fast-paced changes taking place within the legal US sports betting market, but our playbook will help you navigate the gridiron and avoid any unsportsmanlike penalties, while also sharing the top NFL betting sites in the business today.

The following NFL betting sites have been reviewed by our team and are the most trusted online sportsbooks available to US bettors. Each of the following sites offers lines and odds just that are competitive with the Vegas bookmakers. Browsing is free and doesn't require signing up as a member.

Is It Legal To Bet On NFL Playoff Odds?

Yes, it is legal to wager on NFL games, as well as their postseason odds, and bettors inside of the USA can do so at a domestic sportsbook or with a legitimate offshore betting site. If visiting a brick-and-mortar book is not reasonable, then an offshore sportsbook is a legal option in almost all regions in the United States.

There are no federal gambling laws that prohibit the use of offshore sportsbooks, and only Washington state has included restrictions for online betting in their gambling laws, though bettors from there are still accepted at most online sportsbooks.

What Color Liquid Will Be Poured On The Winning Coach Of Super Bowl 56?

America the Beautiful - Who Will be Shown first

America the Beautiful - Who Will be Shown first 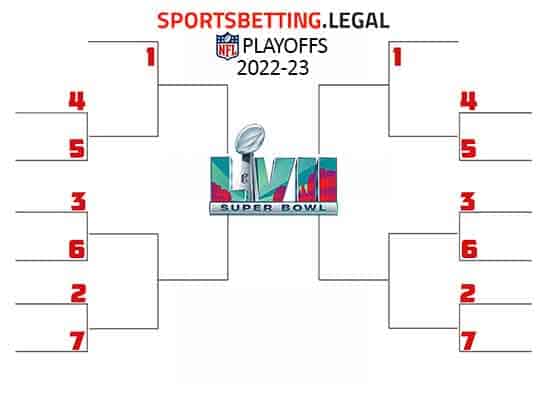 How The NFL Playoff Picture Is Created

Once the 18-week NFL season is complete, the top four seeds in the AFC and NFC are granted to the four division winners in order of first to worst. Seeds 5, 6, and 7 are given to the next three best NFL teams in the AFC and NFC, regardless of division.

Only the top seed in the AFC and NFC receive a bye week during the opening round of the NFL Playoffs, also referred to as wild card weekend. Check out our analysis of the NFL Playoff picture odds versus the current standings to learn more about what these seedings mean when weighed against the Super Bowl futures.

How To Bet On The NFL Playoffs Online

To bet on the NFL playoff odds, you will need either an online sportsbook account or to travel to a state that offers domestic sports betting. Online betting sites, such as the ones listed on this page, offer more convenience than domestic sportsbooks by allowing bettors to place bets on the move and without having to register or fund an account in person.

Once you have signed up for an account at one of our recommended offshore sportsbooks, you can begin looking at NFL playoff game lines, NFL props, and NFL futures. NFL team odds are easy to access as they are usually categorized by sport and relevance. Once you see the bet you want to make you can easily click the line, and the bet will be automatically added to your bet slip for you to finish and submit.

As you can see in the example below we placed a wager on the New York Jets to beat the Miami Dolphins. Since the Jets are predicted to win this game, a wager of $200 on their -160 odds will net a payout of $125.

For National Football League's postseason, you will find a substantial range of NFL Playoff betting lines, wagering options, and NFL bet types to choose from. Bettors can decide how they want to bet with either props, futures, or game line options.

The first element of NFL Playoff betting lines are point spreads - the number of points that oddsmakers expect a team to win or lose by. The team in the negative is favored to win. A wager on the favorite will require the team to win by more than the number of points they were predicted to win by in the point spread. Alternatively, for a wager to pay off on the underdog, that team must lose by less than the predicted margin.

NFL Moneyline bets allow for gamblers to simply select the team that they think will win the game, without having to worry about point spreads. Three-digit odds will be placed next to each team's name indicating the favorite and underdog. A positive number indicates the favored team. Using the example of Chicago Bears +130 vs. Arizona Cardinals -110, a wager of $100 on the Bears will earn $130 if they win. A wager of $110 on the Cardinals will earn $100 if they are the victor.

Also referred to as the over/under and NFL totals are a set amount of points that oddsmakers think that both teams will combine to score. A line is set for the total, and bettors must wager on whether they think the teams will combine for more or less than that amount.

Props are a bet on a game that doesn’t necessarily depend on who wins or loses and are widely regarded as the most "fun" NFL Playoff betting odds. Prop bets can be made on individual player performance, the total amount of penalty flags thrown, or which coach will be seen on the television broadcast first. Literally, any potential in-game occurrence can be wagered on with NFL playoff and Super Bowl prop bets.

Futures betting lines include any action that will occur in the future, including next weekend or after's game lines, or which team will win the next Super Bowl.

Live betting is betting on events as they take place during a game. Live betting odds are updated throughout the game and allow for bettors to keep making bets for the duration of the contest. Live betting odds provide for wagers on quarter and halftime leaders, winners, as well as prop bets on individual player performances.

Online sportsbooks will allow parlaying on the regular season games and playoff games. A parlay is a series of connected bets that must all win for the bet to payout. Parlay bets payout more than straight bets and a standard two-team parlay bet on Bovada pays 26/10.

The top NFL betting apps provided by our top-rated sportsbooks allow for NFL Playoff betting, Super Bowl betting, Pro Bowl betting, and more on the go from anywhere with a reliable internet signal. Android devices, iPads, and iPhones will convert into mobile playoff betting stations just by entering the URL of one of our recommended betting sites into a current mobile browser such as Opera, Google, Safari, Firefox, or Chrome.

Responsive design technologies allow for push-button controls that can access all of the features of the main website. Don't let an ethernet cable dictate when and where an NFL playoff wager can be made. Take advantage of the mobile betting options available and lay some action on the playoffs at the beach or on a mountaintop.

The same day payout is a reasonable expectation when your wager was successful. The only way to accomplish that is by selecting cryptocurrency as the method of withdrawal, as all other banking methods require a minimum of 24 hours to process.

Cryptocurrencies like Bitcoin (BTC), Bitcoin Cash, Litecoin, Ethereum, Stellar, Ripple, and USD Coin feature secure transaction protocols and are not regulated by any government oversight, which provides for quick and easy transactions. Most crypto exchanges have a 5-10-day wait for new users, but to bypass this, you can use the Zelle-to-Bitcoin option via LocalBitcoins, which allows you to get BTC within an hour.

Of course, there are many other ways to deposit and withdraw from online betting sites. Below are a list of options our team has seen.

Promotional Offers & Bonuses for Betting on the NFL Playoffs

When signing up as a new member at an offshore betting site to bet on NFL Playoff odds, there'll be promotional offers provided that will allow for a percentage match of your first deposit. A common sportsbook bonus that we've seen offers to match 50% of a new member's initial deposit up to $250.

If cryptocurrency, such as Bitcoin, is used as the method of deposit, then the offer can increase to $750. Accepting a bonus offer is not a requirement for joining, so be sure to read through the associated terms and conditions to make sure it is the most advantageous move for you.

During pro football's postseason, NFL Playoff betting lines are available for every game in each round, but for most of the year, futures dominate the action. So, how do NFL futures odds relate to actual outcomes?

NFL teams will be ranked from first to worst in regard to their moneyline odds to win their division or conference. This is not a calculated probability, however.

These NFL Playoffs odds are initially based on the projections of the bookmakers. Once they are posted and begin taking action, these odds will alter so that money is coming in at an even pace for all sides.

Is The Pro Bowl Part Of The NFL Playoffs? Expand

The NFL Pro Bowl is an all-star game that is played during the NFL postseason and consists of players who were voted on by fans, players, and coaches based on their performance during the regular season.

The Pro Bowl is an exhibition game and is not part of the regular season or the playoffs. Players who make it all the way to the Super Bowl do not participate in the Pro Bowl because it occurs the week prior and they do not want to risk getting injured before the big game.

What NFL Team Has Reached The Playoffs The Most? Expand

The Dallas Cowboys and Green Bay Packers are currently tied for the most with 35 playoff appearances.

What Team Has The Most Playoff Wins? Expand

The New England Patriots have the most playoff wins with 37.

What Team Has The Fewest Playoff Appearances? Expand

The Houston Texans have only made the postseason 6 times in their brief history. Not far behind them are some other expansion teams Jaguars (8), and Panthers (8).

The Evolution Of The NFL Playoffs

In 1933, the NFL split into two conferences, with the winner of each conference advancing to the NFL Championship Game. A single playoff game was then introduced only to break conference ties for first place. Between 1933-1966 this method saw 9 single-game playoff games.

In 1970 the league expanded to 26 teams, split into three divisions per conference, and implemented an 8 game playoff system including a wild-card. In 1978, the league added another wild-card team and the wild-card round was born. In 1990, a third wild card team was added, creating for a 12-team playoff bracket that included the three divisional winners.

In 2002 the league expanded to 32 teams and restructured the AFC and NFC to include four divisions in each. The winner of each division earns a playoff spot, and the next two overall teams advance to the playoffs as wild cards, earning the 5th and 6th seeds. The 2021 NFL season will use the seven-team new playoff format.