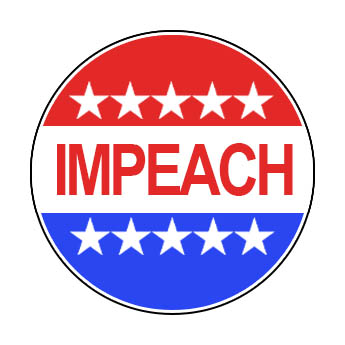 Every US President faces talk of impeachment at some point during their term(s) in office, but impeachment betting odds are usually reserved for when there is a serious Congressional push to launch an inquiry or bring charges against a sitting head of state.

Of course, when that happens, impeachment odds become the most popular and sought-after betting lines at legal online sportsbooks, and that’s been the case in 2019 as Donald Trump faces down serious allegations of impeachable offenses.

Still, because impeachment is an intensely political process with ramifications on both sides of the aisle and with the public at large (no matter which way the proceedings go), bettors are often extremely tempered in their analysis of whether or not a President will be impeached. That said, as with all legal political betting, there is much to be gleaned about a President’s impeachment chances by looking to the odds boards.

Is It Legal To Bet On Presidential Impeachment Odds?

It is largely considered to be legal to wager on Presidential impeachment odds if you use an offshore betting site to do so. Despite the growing number of US-regulated online and brick-and-mortar sportsbooks popping up across the country, you will not find political betting odds at these locations.

This is because most state governments either disallow or discourage sportsbooks from offering election odds. Fortunately, political betting has always been popular at offshore sites, and those remain the only places to find odds on politics and government-related issues.

Important note: In two US states – Connecticut and Washington – there are laws on the books that ban online betting of any kind. That said, these laws are considered unenforceable, and neither state has ever arrested or fined any resident for gambling over the Internet. Still, if you live in CT or WA, we advise you to follow local and all federal betting laws and only bet online at your own risk.

Typically, you can bet on Donald Trump’s impeachment odds at any reputable offshore sports betting site, but there are no betting lines posted for his impeachment chances at the moment. That is largely due to the forthcoming 2020 Presidential election, where Democratic Party leaders are hopeful that US voters will oust Trump and alleviate the need for them to begin the impeachment process again.

Our political prop bets guide is a good tool for exploring prop bets such as impeachment odds, and other factors surrounding the 2020 Presidential election. This prob bet tutorial will properly prepare bettors for when impeachment odds eventually reappear at political sportsbooks.

Current Odds for Donald Trump to be Impeached Again

There are no current odds for Donald Trump being impeached at major offshore legal sports betting sites because of the upcoming Presidential election in November. Democrats, and even some Republicans, like US Senator Mitt Romney, are hopeful that Joe Biden will win the Presidency and alleviate the need for impeachment hearings to begin again.

Will Donald Trump be impeached again? If he wins his reelection bid in 2020, he almost certainly will face impeachment hearings in the US House. If and when that happens, top political sportsbooks will produce odds that will allow bettors to wager the outcome.

What Is a Presidential Impeachment?

Impeachment is a largely misunderstood concept. Many people think that impeachment means that a President will be removed from office, but that’s actually never happened. Impeachment is a legal accusation of criminal malfeasance, and it is purely a political process. An analogy to Presidential impeachment is, for private citizens, a criminal or civil charge in a court of law. And like every person in America, once impeached, the President gets due process before removal can ever happen.

Throughout all of US history, only two Presidents have ever been impeached: Bill Clinton (1998-1999) and Andrew Johnson (1868). Richard Nixon was set to face impeachment in 1974, but he resigned the Presidency before any charges were brought.

How Does the Impeachment Process Work?

The Presidential impeachment process is simple enough, and it includes the following fundamental procedural steps: 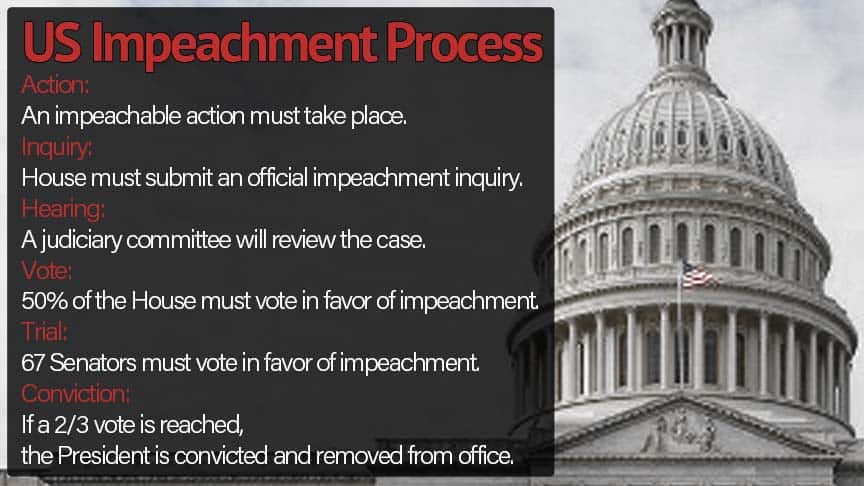