First originated in 15th century Scotland, the game of golf is one of the most popular sports on the planet. The Professional Golfers’ Association (PGA) is where the top golfers in the world compete, and you can find them on your television screens or local championship courses each weekend trying to win the top prize money. Betting on sports is always an exciting proposition, but it can be confusing on many fronts.

That's why our guide to legal betting on golf should be in every PGA tour bettors cart. It can be tough to hit the legal fairway if you are new to golf betting online or betting on sports in general. We'll guide you through the legalities of betting on the Masters tournament as well as the other major golf matches, and introduce you to the best sportsbooks in the business that offer hole-in-one betting action.

Yes, betting on the Masters and other PGA golf tournaments is legal. Bettors inside of the USA have two options to wager on golf and PGA tournaments. If you live in a state that regulates it's own sports betting and has legal sportsbooks at physical locations or via mobile applications, you can visit one and place a bet on golf. Your other option is to use an online sportsbook operating outside of the United States in a regulated gambling jurisdiction.

There are no US gaming laws on the books preventing bettors located within the USA from using an offshore sportsbook. Washington state has prohibited all forms of online betting. While these laws are not enforced, bettors should be aware of them prior to placing a wager on golf.

Following is a list of the top-rated online sportsbooks legally accepting wagers on golf events like the Masters, US Open, or entertainments own Celebrity golf. The sportsbooks listed here are all legitimate, reputable businesses that are operating legally offshore. We are personally registered customers at these sportsbooks, so we're putting our money where our mouth is, literally. 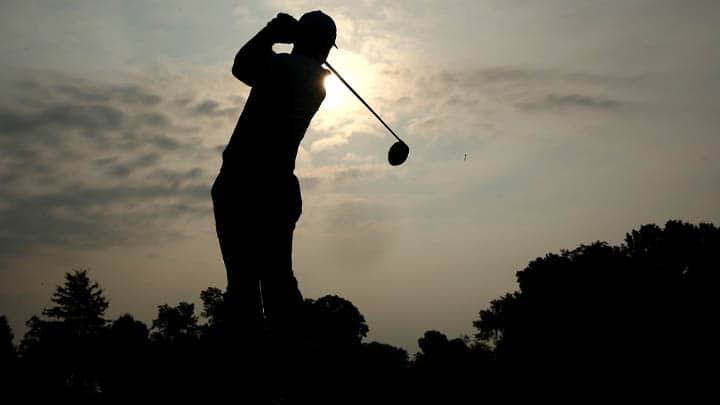 This tournament is an annual event held on the PGA schedule and is considered the most prestigious of the four major professional golf tournaments. It is also one of the most popular events for golf wagering, with millions of fans legally betting on the Masters Golf Tournament each year.  It is held annually each April at the Augusta National Golf Club in Augusta, Georgia, and has been played there for over 80 years.

It is an invitation-only event for the participating golfers and includes professionals from the ranks of the PGA, The European Tour, and the Japan Golf Tour. Winners of the Masters receive a green jacket, a sport coat that is nearly the same color of a putting green. Jack Nicklaus has the most green jackets with six, and Tiger Woods is right behind him with five. In fact, last year’s winner was Tiger Woods, who took home just over $2 million in prize money.

Annually held in May, The PGA Championship golf tournament has been an event on the PGA tour for over 100 years, and always sees a lot of betting action. The tournament is also on the European and Japan pro tours. The location of the golf course varies from year to year. The 2022 PGA Championship will take place at Southern Hills Country Club in Tulsa, OK.

Legal Betting on the US Open Golf Championship

The United States Open Championship, or the US Open, is the third of four major championships featured each year on the PGA Tour and has been played since 1895. The US Open is also on the schedule of the European Tour. It is played during mid-June annually and does not use the same golf course for each year’s tournament.

In 2021 the tournament was won by Spain's Jon Rahm who took home just over $2 million. In 2022 the U.S. Open will be played at The Country Club in Brookline, MS. If you want to legally bet on the US Open Golf Championship, the sportsbooks we've recommended will offer lines for winners, round leaders, and prop bets in the days leading up to the opening tee off.

The British Open, aka The Open Championship, has been played over 140 times and is featured on the PGA, European, and Japan Golf Tours. The course changes locations each year, but it is always held at a location within the British Isles.

The 2022 British Open will be held at The Old Course in St. Andrews, Scotland. The 2022 grand prize is expected to be just under $2 million. The British Open is held each year in July.

What Kind Of Bets Can I Place On Golf?

Typical bets that we see on PGA are:

What are the four majors in golf?

There are many golf tournaments throughout the PGA schedule, but four tournaments are considered majors, and they are:

What channel is the Masters on? Expand

Who has won the most major golf tournaments? Expand

Jack Nicklaus has the most major golf tournament victories with 18. Tiger Woods is close behind with 15 major wins.

Who won the Masters 2019 tournament? Expand

Tiger Woods won the 2019 Masters Tournament. It was his first major win since 2008, and the fifth time he has won the Masters.

When is the Masters Golf Tournament? Expand

How many times has Tiger Woods won the Masters? Expand

Tiger Woods has won the Masters Tournament five times, winning his most recent green jacket in 2019. The win leaves him one Masters victory behind Jack Nicklaus, who has six wins.

How much does the winner of the Masters get? Expand

The winner of the Masters golf tournament will win $2 million.

Who has won the most Masters Tournaments? Expand

Jack Nicklaus has won the most Masters Tournaments with 6. Tiger Woods is in second place with 5. The winner of the Masters receives a green jacket.

How to get Masters tickets? Expand

Tickets can be purchased from the Masters website and must be applied for a year in advance due to popularity.

Where is the Masters? Expand

The Masters Tournament is played at the Augusta National Golf Club in Augusta, Georgia.

When is the British Open? Expand

The 2022 British Open Golf Tournament, aka The Open Championship, will take place on July 16th through 19th at The Old Course.

What channel is the British Open on? Expand

The British Open will be shown on the Golf Channel and NBC.

Where is the British Open? Expand

The British Open, or The Open Championship, will be played at The Old Course in Scotland.

Shane Lowry was the winner of the 2019 British Open. Odds to win British Open are posted on sportsbooks now.