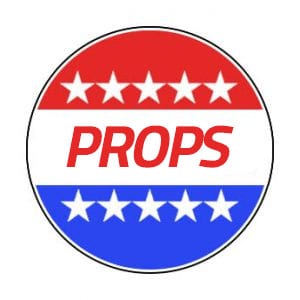 Betting on United States politics is as old as the country’s founding in 1776, and midterm, primary and presidential election odds have often drawn the most action from people who want to bet on 2024 presidential candidates they believe will win at the ballot box.

Recently, proposition wagers or “prop bets” on political events have become increasingly popular as betting sites and prediction markets look to provide odds and lines during the two-year drought in the time between major elections.

Some political prop bet examples include: Will President Donald Biden be impeached? How many times will Trump tweet this week? Which Democratic candidate will get the most speaking time at the debate? If you think you know the answers to any of these, then you’re halfway to making a profit from things politicians say or do—the other half is voting on where you’ll place the winning wager.

Is It Legal To Bet On Political Props?

Yes, betting on politics is legal in the United States, and this applies to all political events. There are no state or federal gambling laws that prohibit you from using political betting sites in other jurisdictions for wagering money on prop bets, trading on prediction markets, or betting on the 2024 presidential election odds.

While many states provide legal sports betting opportunities, domestic sportsbooks do not offer political betting odds of any kind, even though there are no regulations saying they cannot. That leaves offshore sportsbook sites as the best option for Presidential prop bets.

Next to have classified documents seized

Online sportsbooks and prediction markets are the two ways to bet on political props and events legally. Here’s a breakdown of how both list prop odds and some of their pros and cons.

Online sportsbooks, such as Bovada or BetOnline, regularly offer political prop bets alongside their offerings for election futures and other odds such as Supreme Court odds, impeachment odds, or indictment odds for political figures. Similar to betting lines for sports, prop bets on politics can be in the form of money line, over/under, and even a point spread (which will typically be something like a margin of victory in a specific state).

Betting on political props at a sportsbook requires you to wager a certain amount to receive a specific payout, which is all based on the odds set.

Example: How many times will the candidates say “impeach” at the debate?

The key advantage that sportsbooks have over prediction markets is that they can offer much higher limits or outright have no limit at all. Additionally, because oddsmakers don’t adjust the odds on prop every time a wager is placed, there’s a much higher chance to find value on the board at any given time.

If you like to investing or trading stocks, then you might prefer prediction betting markets, like PredictIt, for example, over a traditional sportsbook. Most props in the market require you to invest a certain amount of cents per dollar on a “Yes” or “No” questions while other propositions give you a range of possible answers that could payout.

Since prediction betting sites base their odds on supply and demand economics, the price of a stock is determined by its market value at a given point in time.

Example: Will a candidate’s average RCP polling numbers go up after the debate?

The advantage over sportsbooks is that the market value for props fluctuates on a daily basis, which could be used to your advantage if you’re someone who likes to strike when the iron’s hot. However, the downside is that because prediction sites in the US operate as a non-profit for research, they limit the amount anyone can invest (Ex. PredictIt has $850 limit for any contract) while sportsbooks will have limits between $1000 and $5000 or have no at all.

Gambling money on props differs from political futures because it’s more of a “side bet” that is based on either an occurrence or non-occurrence of a specific event and not the outcome itself like with futures.

Here’s an example: You’re probably familiar with Super Bowl prop bets, which annually have odds posted on the “number of songs played at halftime” and “Gatorade color poured on the winning coach” among many others.

Although these are things that will happen during the big game, they ultimately do not determine which NFL team wins the Super Bowl and lifts the Lombardi Trophy.

Prop betting works the same for politics. Odds for “who will win the popular vote” and “how many times will Trump post tweets during the week before an election” belong in the prop bet category because they ultimately do not determine a winner.

We’ve included several political prop bets that have previously been offered at sportsbooks and prediction markets, so you can have a better understanding of what kinds of possible occurrences are regularly available to receive prop betting action.

The possibilities for props are literally endless when it comes to politics, so needless to say, the oddsmakers and markets like to have some fun with their offerings.

What time will CNN call/project the winner of the presidential election?

What will be the voter turnout for the general election?

Will Trump be impeached and removed from office?

How many times will Trump tweet during the debate?

Will any candidate say a curse word at the debate?

Who will receive the most speaking time during the debate?

How many times will the candidates say “Trump”?

How many times will Joe Biden say “Obama”?

Will Joe Biden touch a female candidate on stage?

How many times will Bernie Sanders say “billionaire”?

How many times will Elizabeth Warren say “big tech?

How many times will “Buttigieg” be mispronounced?

Will a candidate speak in a language other than English or Spanish?

Mobile sportsbook applications are responsible for a larger chunk of the overall betting market with each passing year.

The online election betting sites we recommend above port their services to Apple and Android devices via onboard web browsers and do not require any download to access the latest political prop bets.

Using any up-to-date iPhone, iPad, or Android smartphone or tablet to click on the political sportsbook lines within this guide and your web-ready device can bet on political props from just about anywhere inside the USA.

Because political prop bets take action until a definitive conclusion is reached, or the odds are removed by the sportsbook - whichever comes first - all election props qualify as live betting.

Political props can remain on the boards well after votes are cast as the outcome is not conclusive until it is announced officially. As long as the online election betting site still has the prop posted, in-play odds are still live and available for placing a wager.