Because legal betting on the National Football League rules the roost at domestic and offshore sports betting sites, just about all NFL bet types are fair game for inclusion in the wagering odds. One of the latest fads at football sportsbook sites is legally betting on NFL Hall of Fame odds that allow for wagers to be placed on who will be enshrined as one of the top pigskin players, coaches, or contributors of all time.

Read the following sections to learn the entire playbook for betting on the NFL Hall of Fame at offshore sportsbook sites as well as domestic retail venues, and whether or not it is legal for USA gamblers. We also cover the selection process and give our take on who has the best chance of NFL HoF induction in 2022.

Is It Legal To Bet On NFL Hall Of Fame Odds?

Because there are no federal or state laws in place to prevent offshore sportsbook sites from accepting bets on NFL Hall of Fame odds over the Internet, bettors will not get into any trouble for partaking.

About The NFL Hall Of Fame

Each year, the NFL Hall of Fame Selection Committee will process several rounds of contending players, coaches, and contributors for induction consideration. In February, the Committee meets and narrows the list down to five potential Hall of Famers and then places them on a ballot for another round of yes or no votes where those that receive over 80% approval will become inducted. 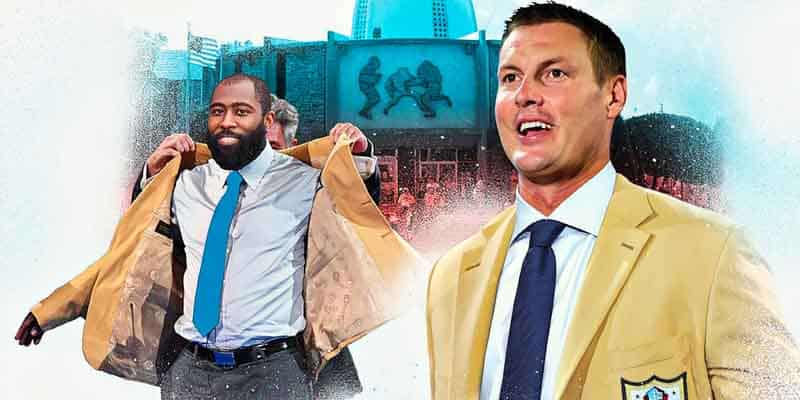 While there are no current odds on the boards at online sportsbook sites for the next NFL Hall of Fame Class, the two below sections make up the most likely candidates for election. The first list compiles each of the players that were finalists in 2021 but did not make the cut. The second list are the most likely players to become finalists for the NFL Hall of Fame during their first year of eligibility.

We believe that when the odds for the 2022 NFL Hall of Fame debut, the following 5 players will be positioned at the top.

There are also NFL Hall of Fame members that are elected each year that were contributors to the game, such as writers, innovators, league executives, and more. Each year’s contributor inductees are decided by a 5-member subcommittee made up of members of the overall NFL HoF Selection Committee.

While we’ve not yet seen NFL Hall of Fame prop bets appear, it is only a matter of time before NFL oddsmakers produce them. NFL prop bets for what position will be selected the most on a given year, or for which player from a grouping of the same position will be inducted, offer just a peek at the overall potential of what could be offered in the coming years for NFL HoF odds.

Where is the NFL Hall of Fame?

The NFL HoF is located in Canton, Ohio.

How many players are in the NFL Hall of Fame?

As of 2021, there are 346 members that have been inducted into the NFL Hall of Fame.

How many kickers are in the NFL Hall of Fame?

How many NFL owners are in the Hall of Fame?

There are currently 14 current or former NFL Team owners that have earned a spot in the National Football League’s Hall of Fame.

How do players become eligible to make the NFL Hall of Fame?

The first condition of eligibility is that a player needs to be retired for at least 5 years. After that period of time, players can be voted into the NFL HoF by the Hall of Fame Selection Committee which is made up of current members as well as pro football writers. There is no retirement requirement for NFL contributors to become eligible for Hall of Fame induction.