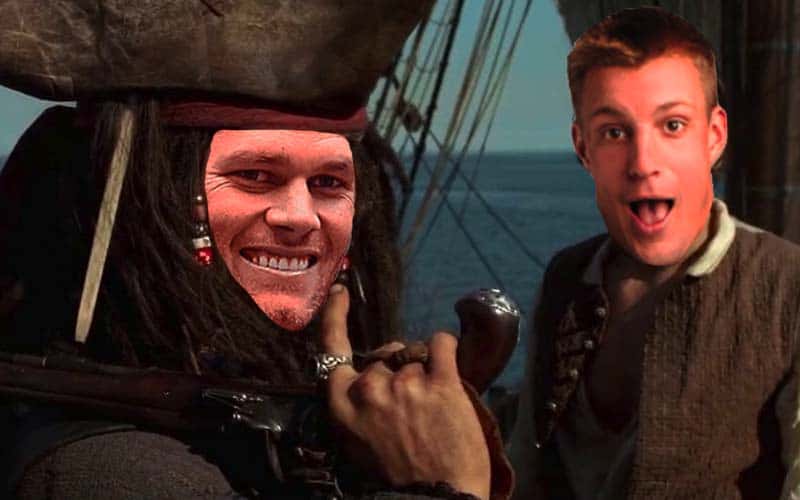 Just when you thought betting on the virtual 2020 NFL Draft couldn’t get any more exciting—two Buccaneers have swooped in and crashed Roger Goodell’s party right before the league kicks off the first round tonight at 8:00 PM ET.

The Tampa Bay Buccaneers have bombarded the other 31 NFL teams in the offseason so far and plundered rosters for several players. Still, none are worth their weight in treasure like the mid-March acquisition of six-time Super Bowl champion quarterback Tom Brady.

Both selections are for the 2020 NFL Draft, and the Bucs’ acquisition of Gronkowski reunites the tight end with Brady, who became one of the quarterback’s favorite targets over the past decade in Foxborough.

And it turns out Brady has recently acquired a unique conch shell to summon Gronk for duty whenever he wants. There’s no telling what the future Hall of Famer had to sell to obtain this treasure, but it’s certainly worth keeping an eye on before placing a bet on the 2020 NFL season legally.

Now that the Brady-Gronk bromance has taken their talents to the Sunshine State, the betting odds to win Super Bowl 2021 has seen a significant shift in Tampa Bay’s favor since signing the NFL’s GOAT a month ago.

Sportsbooks in Las Vegas and all over the world posted their early Super Bowl 55 futures after the Kansas City Chiefs defeated the San Fransisco 49ers in this year’s big game.

The Buccaneers’ chances next season were listed at +5000, which put the team in the bottom third of the league the day after Super Bowl 54. A $100 bet would win $5000 until Brady joined the Bucs, launching their odds to lift the Lombardi Trophy into the top five.

The addition of Gronk keeps Tampa Bay in fifth, but Bovada has further increased the Bucs’ Super Bowl odds to +1000, meaning a $100 bet now only wins $1000—exactly one-fifth of how much could have been earned two months ago.

According to the April 23 mock draft from Bucs Nation, the Tampa Bay front office wants to select Georgia Bulldogs OT Andrew Thomas with their 1st round, 14th overall pick to give Brady extra protection.

However, Thomas could very likely be off the board by that point. If that happens, the Bucs are reportedly prepared to take South Carolina Gamecocks DL Javon Kinlaw to give the defensive line some much-needed depth.

On the other hand, Bovada Sportsbook heavily favors the Bucs to go with an offensive player first, listing “Offense” on the team’s NFL Draft prop bet at -350, meaning a $350 wager would win $100.

The oddsmakers predict “Defense” is much less of a priority for the first round on Thursday, April 23 and post the prop at +225, where a $100 bet is less likely to win but would return a much more significant sum of $225 if the Bucs pick any defensive player with the 14th overall selection.

Getting Brady another offensive linemen will happen early at some point during the three-day event. Still, the team also intends to add even more firepower and likes local Florida State running back Cam Akers, who could go in the third round after the Bucs add help to both the offensive and defensive front.

In total, the Bucs have seven picks heading into the 2020 NFL Draft, which are as follows:

Whether you’re wagering legally on the tonight’s best NFL Draft prop bets or accessing betting value ahead of to the upcoming 2020 NFL season, the Super Bowl odds will see substantial action following the draft since bettors will have a better idea of what the rosters will look like on paper.

For now, here’s the Super Bowl 2021 betting chances for each of the 32 teams ahead of this year’s NFL Draft.