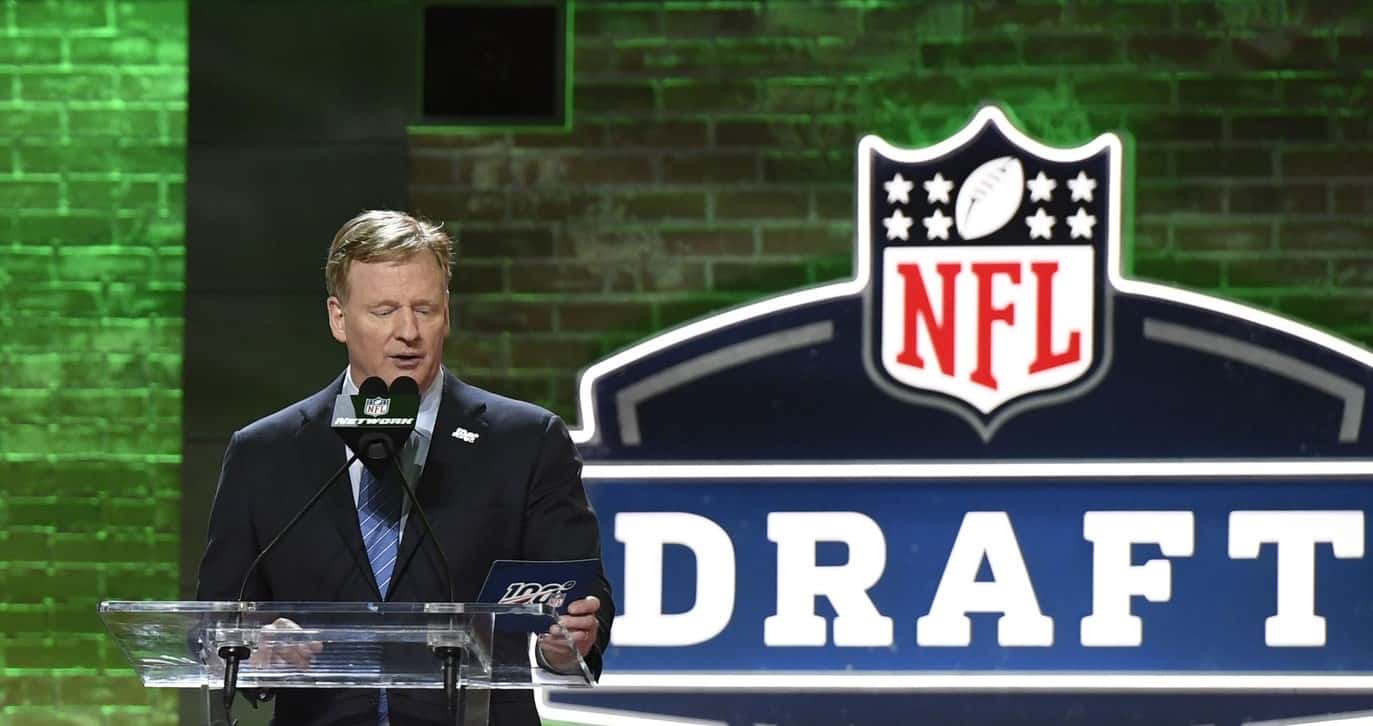 What happens in Vegas, stays in quarantine (hopefully) because the coronavirus pandemic has halted even the 2020 NFL Draft plans in the Gambling Capital of the World.

Like sporting events, COVID-19’s impact on legal sportsbooks can be felt both in the United States and around the world.

With March Madness bringing sadness and the April showers not washing away the viral disease, fans and bettors have looked anything to take their attention away from the global crises.

Las Vegas betting sites and US sportsbooks released an initial round of 2020 prop wagers on the NFL Draft. Still, oddsmakers are going all out by offering hundreds of ways to bet on teams, players, outcomes, oddities, and of course, everyone’s favorite pro sports league commissioner.

Since the head of the NFL escaped the myriads of booing this year, oddsmakers have graced us with other potential event failures as well as Roger Goodell props, which include odds on whether Mr. Suit wears a suit on the stream or if he’s feeling “Casual Friday” or pajamas on a brisk Thursday night from upon his castle in NYC.

Nevertheless, we’ve saved a special proposition that’s sure to rile up college football fans so without further ago, here’s a brief look at the schedule before immediately diving into the five best prop bets available for the 2020 NFL Draft.

The three-day 2020 NFL Draft will be broadcasted and streamed live on NFL Network, ESPN, and ABC starting with the first overall pick on Thursday, April 25, and ending with the 255th pick, aka “Mr. Irrelevant,” on Saturday evening.

Here’s the format and schedule for the now remote-only event:

The following are the five best “unique” prop bets you place money ahead of Thursday’s NFL Draft. There are more than 200 ways to bet on the 2020 NFL Draft at the top-rated Bovada Sportsbook, but below are the most viral wagers of the bunch.

To learn about the different bet types, US federal and state gambling laws, and reading odds ahead of the NFL Draft, 2020 season, 2021 playoffs, or Super Bowl 55, then check out our guide: How To Bet On The NFL Legally 2020

5. How Many Times Will The 2020 NFL Draft Broadcast Experience Technical Difficulties?

How the prop bet will be graded: Feed Slowdowns or low quality do not count towards the wager. Technical Difficulties included in the wager are any complete loss of feed, or any part of the draft proceedings or interview that must be halted because of sound or video issues. April 23 Broadcast Only.

Prop bet pick: Under 4.5 (-350) Heads will roll if the broadcast crew ruins the NFL’s judge, jury, and executioner one time of year to be in the national spotlight. Three would be high, and five is definitely a paddling from Goodell.

4. Will Roger Goodell Be Wearing A Suit At The Beginning Of The 2020 NFL Draft?

How the prop bet will be graded: First Live Picture of Goodell will be used to grade the wager. April 23 Broadcast Only.

Prop bet pick: Yes (-900) Of course, Goodell is going to wear a suit. The commissioner has a highly revered corporate CEO reputation to uphold. Still, the only other option would be a polo—if he hosted the NFL Draft while playing on a golf course somewhere, but all bets are off in 2020 after Goodell reads this.

3. Will Roger Goodell Be Seen Wearing Sweatpants Or Pajamas During The 2020 NFL Draft?

How the prop bet will be graded: Live Pictures Only. April 23 Broadcast Only.

Prop bet pick: No (-5000) Since the prop requires stilled images of #LazyGoodell to be “live,” which means it needs to happen during the first broadcast night. Photoshopped pictures beforehand and other pre-rendered images are off the table, so there’s little chance the commission voluntarily memes himself in front of tens of millions NFL fans.

How the prop bet will be graded: A broadcast signal intrusion by any unauthorized individual must happen for Yes to be graded the winner. April 23 Broadcast Only.

Prop bet pick: Yes (+1600) However, only for the value since it’s 2020 and the year’s NFL Draft is going to be a prime target for malicious hackers. A successful attempt would be akin to cyber warfare found in TV shows like “Mr. Robot,” among others, but oddsmakers believe it’s highly unlikely to stop Goodell from being shown on screen.

How the prop bet will be graded: The majority of 32 picks are from SEC or any other college football conference. 16 picks for each is graded as a “push,” and all wagers are refunded.

Prop bet pick: SEC +155 Last but not least, the Southeastern Conference is the greatest college football conference in the history of the sport. Don’t believe me? Bovada’s oddsmakers needed to put every other conference in existence just to make it competitive to pro football potential from the SEC.

The Field -220 will probably have 17 or more picks. But just like the annual tradition in NCAA FBS, everyone tries to cry and discredit the SEC. Still, in the end, a team from the GOAT college football conference walks away with a national championship more often than not in the modern era.