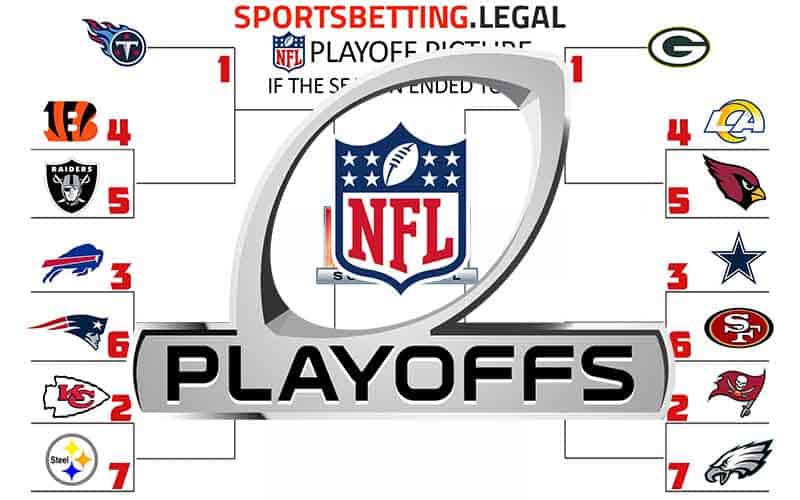 NFL game lines for all six wild card weekend contests have been produced and project that the higher seeded team will advance across the board.

The round one NFL Playoff game that appears to offer the most intrigue is the pairing of the Dallas Cowboys and the San Francisco 49ers where the home team is predicted to win by 3 points.

Here is our NFL Playoff betting breakdown for each of this weekend’s six wild card round matchups.

This Saturday at 4:15 PM, two teams that were up and down all season will face off to advance to the divisional round. The Las Vegas Raiders were able to secure the number 5 seed by winning a thrilling overtime game in Week 18 against the Los Angeles Chargers that jettisoned the loser out of the postseason.

The Cincinnati Bengals won the NFC North and the #4 seed that comes along with it, but both teams’ rocky performance over the course of the season has oddsmakers and bettors guessing.

If we had to bet on this one, we’d pick the Bengals to cover the NFL point spread of 5, but given how inconsistently these teams have performed in 2021-22, our staff is laying off these playoff odds.

Saturday’s second game begins at 8:15 PM and features a matchup of two AFC East rivals that split their regular-season series with a game each. We’ve got a hunch that head coach Bill Belichick has something special cooked up for the Bills (New England won on the road last time), so consider betting on the New England Patriots to cover the 4 points.

Sunday at 1 PM the Tampa Bay Buccaneers host the Philadelphia Eagles who are playing solid football at just the right time of year. Do the Eagles represent a dark horse contender in the NFL Playoffs this year?

Perhaps, but unfortunately, they’ve drawn the Bucs in the first round who are likely to squash the overachieving Eagles en route to Super Bowl LVI.

As mentioned previously, the Cowboys and 49ers appear to be the most competitive game of wild card weekend according to the NFL betting odds.

This game has the highest potential for an upset, and with the 49ers coming in hot and sporting a healthy roster, betting on the Cowboys to win this weekend is risky.

An NFL Playoff edition of Sunday Night Football begins at 8:15 PM and concludes the day’s games with what should be a blowout win by the Kansas City Chiefs over the mediocre Pittsburgh Steelers.

The only outlier is the overflowing passion bucket of Pittsburgh QB Ben Roethlisberger who is taking his final breaths as an active NFL player. It should be a fun watch, but tread lightly when betting on the Steelers and don’t get caught up in the Roethlisberger retirement hype.

Ushering in a new era of Monday Night Football in the playoffs is an AFC West rematch between the division champion LA Rams against the Arizona Cardinals who are struggling to win games during the second half of the season.

The two split the series this year, both winning while on the road, but considering how Arizona has been tanking as of late, perhaps LA represents the safer option for Monday Night. Good luck!