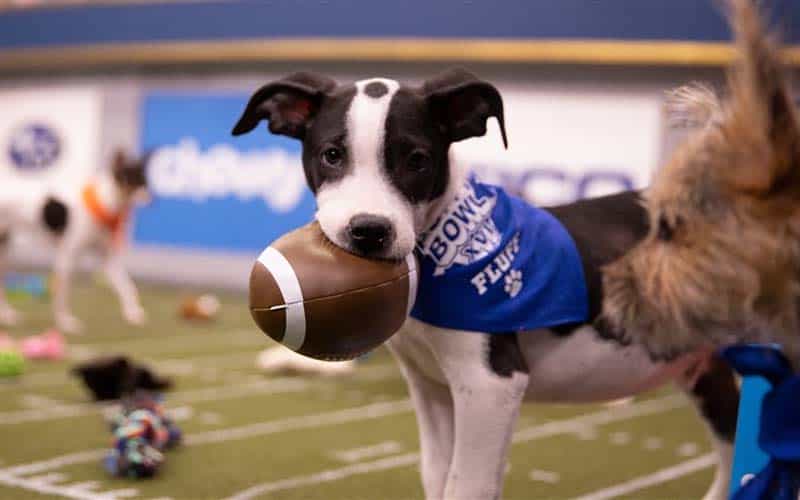 Everyone and their dog knows about betting on the Super Bowl, but did you know that you can bet bones on which team of puppies will come out on top for the Puppy Bowl?

“BAD HUMAN!” is likely what your doggo or pupper would bark (if we could understand them) when they find out you know the Chiefs are 1.5-point favorites over the 49ers in Super Bowl 54 but have no idea what the point spread is for their own football championship.

Fortunately, we’ve got both you and your canine companion covered.

The Puppy Bowl is an annual sporting event hosted by Animal Planet that’s a puppy parody of the Super Bowl and features adorable animals who currently live in a shelter and need a forever home.

Since the first broadcast in 2005, 100% of the puppies and kittens—the felines perform during the Kitty Halftime Show—who participated in the Puppy Bowl, have been adopted by loving families.

Over 500 dogs have found a new home, and this year’s Fluff-Ruff matchup features the biggest lineup ever with 96 adoptable puppies, five with special needs, from 61 animal shelters. Puppy Bowl XVI airs on Animal Planet at 3:00 PM ET on February 2—Super Bowl Sunday.

In the 16th epic chow-down between Team Fluff and Team Ruff, only one pack of canine contenders will walk to the park with the title of Puppy Bowl XVI champions and the coveted Chewy “Lombarky” Trophy.

And the entertainment betting odds for this year’s chomp-ainship favor the fluffy four-legged friends pawing their way to victory over the rough rascals.

Team Fluff opens as a 7.5-point favorite over Team Ruff, who are the underdogs (underpups?) for this year’s Puppy Bowl. Team Fluff will seek to avenge last year’s loss to Team Ruff, who leads the series 3-2 since scoring began in 2015.

Age of Most Valuable Puppy (MVP)

Since the Puppy Bowl’s Most Valuable Puppy will likely come from the starting lineup, Under 17.5 Weeks for his or her age is favored because 23 of the 42 starters are younger than 17.5 weeks. But the Over has good value since older puppies are more likely to be stronger and faster.

Both sides of this prop bet are evenly split among the starting puppies, so you essentially have a 50/50 chance of winning. Of the 15 MVPs, “B” and  “M” are the most frequent first letter of the winners’ names with three awards for each.

Gender Of Most Valuable Puppy (MVP)

Since scoring began in 2015, males have won the MVP three times compared to two for females. With the lineups featuring a pretty even male-to-female ratio, there appears to be more value on the good girls rather than the good boys.

Will a Pure Bred or Mixed Breed win Most Valuable Puppy (MVP)?

Mixed breeds have a 9-6 record of winning the Puppy Bowl MVP over Pure Bred puppies and are currently riding a 5-year streak. With mostly mixed breed puppies in the starting lineup, it appears a sixth straight MVP award is a safe bet.

Will a puppy attempt to mate during the Puppy Bowl?

Fornication, along with pooping on the field, receives the most amount of penalty flags during the Puppy Bowl. But don’t bet on seeing any puppies mating because Animal Planet is a family-friendly channel, dog dammit. All mating styles and positions will be edited out, so “No” is a pretty safe wager.

Last, but also probably least, we arrive at the most-troll Super Bowl/Puppy Bowl prop bet: Will Michael Vick, the former NFL star who served nearly two years in prison for dogfighting, tweet about the Puppy Bowl?

Vick isn’t very active on Twitter, to begin with, and it’d be pretty beneath him considering he’s found God and regularly advocates for dogs and other animals. While the prop has very little return on investment, the odds of him tweeting anything about the Puppy Bowl are slim to none.