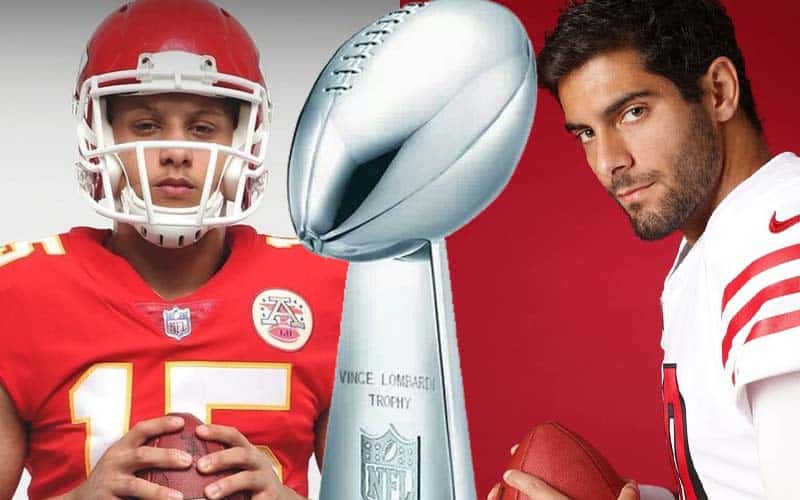 Two teams remain, but only one will be crowned champion of the NFL.

According to the opening Super Bowl betting line at Bovada Sportsbook, the Kansas City Chiefs have opened as a 1.5-point favorite over the San Francisco 49ers for Super Bowl 54 in Miami, FL on February 2, 2020.

Early betting lines for Super Bowl Sunday were available ahead of this past weekend’s conference championships. A matchup between the Chiefs and 49ers was the most likely to happen, and the projected spread was Chiefs -2 at the time.

The Chiefs went on to win 35-24 over the Tennessee Titans in the AFC title game, and immediately following the 49ers 37-20 victory over the Green Bay Packers in the NFC title game, oddsmakers settled on opening the Chiefs as a 1.5-point favorite.

After removing the juice from the sportsbook, we can see the oddsmakers give both sides a good chance to win the Super Bowl.

The Chiefs were the preseason Super Bowl favorites at Bovada with +700 odds. However, the team needed to overcome a midseason injury to 2018 NFL MVP Patrick Mahomes and pull off comebacks in both of their playoff victories to reach the big game.

Despite seeing their Super Bowl chances open near the middle of the pack at +4000, the 49ers quickly proved they were Super Bowl contenders by winning eight consecutive games to start their season and ending with the NFC’s No. 1 seed.

While the spread and the money line have remained relatively unchanged since the NFC championship concluded, the total, which opened at over/under 52.5 points, has seen a significant shift upward.

The total is now set at over/under 54.0 points, which means the early Super Bowl bettors believe the sportsbook undervalued the number of points both sides can score and have since placed a majority of the money on the over, causing the total to rise as a result.

One of the best bets you can make in ensuring that your wager has the most possible value is to shop around to see where points and return on investment can be found in your favor.

If this is your first time placing a wager on the Super Bowl, or any NFL game for that matter, then be sure to check out our Legal NFL Betting Guide, which includes tips, strategies, laws, definitions, resources, and more to help you cover all bets on Super Bowl 54.