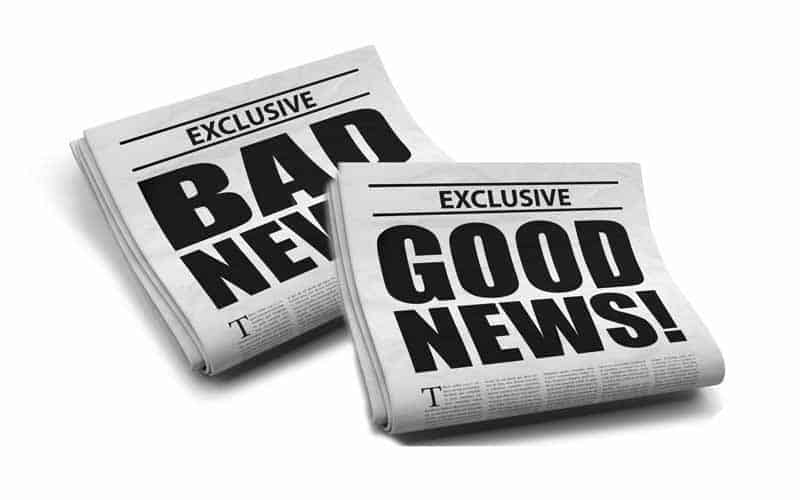 Dear Oregon: I have some good news and bad news concerning legal sports betting coming to the Beaver State.

Which would you prefer first? This National Geographic study says 75% of you would prefer to get the bad news first, so let’s get that out of the way.

The Oregon Lottery confirmed this week that Scoreboard, its mobile sports betting app, won’t be ready in time for NFL season opener on September 5 like initially planned and has been delayed indefinitely.

Lottery public relations manager Matt Shelby did not give a new timeline for when Scoreboard would be ready when speaking to reporters but said the delay could be anywhere from several weeks to several months.

Shelby said the delay is to ensure the app meets the lottery’s standard since right now, it’s not ready to give users a worthwhile betting experience.

While it’s entirely possible that Scoreboard will not be available for the entire 2019 NFL season, Shelby added that he and lottery officials hope to launch the sports betting app within the first few weeks of the regular season.

With the bad news out of the way, let’s dive right into why Oregon sports bettors should be excited with some good news.

Despite Indiana setting themselves up to become the 12th state to launch legal sports betting yesterday, it looks like Oregon will actually claim that title. The Hoosier State will have to settle for “lucky” No.13 when September rolls around.

The Chinook Winds Casino Resort in Lincoln City, which is operated by the Confederated Tribes of Siletz Indians, has announced the launch date for their sportsbook, according to a press release and the casino’s Twitter account.

The ACTION is at Chinook Winds! Add excitement to nearly every pro sport by laying a wager at Chinook Winds Casino Resort. Our new #SportsWagering Lounge is soon to open! Watch this space for more information soon! https://t.co/nwgAS6SqdC pic.twitter.com/qV4yMe2x5k

The tribal casino’s sportsbook, and the first legal sports betting location in the state of Oregon, will begin accepting wagers on Tuesday, August 27 at 9 am PT and normal operating hours will be from 8 am to 11 pm PT, seven days a week.

All wagers must be placed in-person at the tribe’s brick-and-mortar sportsbook, and there will be no online or mobile sports betting services available from the casino available at launch.

However, unlike the now-delayed Scoreboard app, bettors are allowed to put money on both professional and collegiate sporting events at the Chinook Winds sportsbook.

When the lottery’s mobile betting option is eventually launched, it won’t offer odds and betting lines on NCAA games, such as college football or basketball. Officials hope to include college sports wagering sometime in 2020.

For Oregon’s first sportsbook at Chinook Winds, the Las Vegas Dissemination Company was selected to be the provider of sports betting services.

“In our search for a service provider, LVDC stood out from the start,” said Will Robertson, Director of Casino Operations. “Their professionalism and experience have been on display from day one. We are excited to have them by our side as we begin offering sports wagering for our guests.”

Robertson said after placing a wager, patrons would be able to watch the games in the casino’s sportsbook lounge or from the Rogue River Steakhouse Lounge.

The LVDC has previously worked to open a sportsbook at the tribe-owned Hilton Buffalo Thunder Resort & Casino in Santa Fe, New Mexico, and Jay Vaccaro, LVDC Director of Sales, said he was excited to work with the Siletz Tribe to launch Oregon’s first sportsbook.

“We are grateful to the Confederated Tribes of Siletz Indians for this opportunity and are looking forward to sharing our Las Vegas style of sports wagering with the customers of Chinook Winds Casino Resort,” Vaccaro said. “The support and cooperation we have received has been outstanding and together we will bring additional fun and excitement to this great property.”

Lawmakers in Oregon have not passed or even introduced legislation to legalize any form of sports betting.

However, the state lottery is allowed to offer sports gambling due to previously being partially exempt from the now-repealed PASPA when it was signed into law in 1992.

The lottery even offered its own parlay game, known as Sports Action, until 2007. Oregon would eventually shut down the game because the NCAA instituted rules to prevent tournaments and championship events from being held in states where wagering on collegiate sporting events was legal. The NCAA axed those rules earlier this year.

Because online and mobile is not mentioned in the agreement, only in-person wagering will be allowed at the tribe’s sportsbook until the Oregon Legislative Assembly passes and the governor signs new sports betting legislation into law.