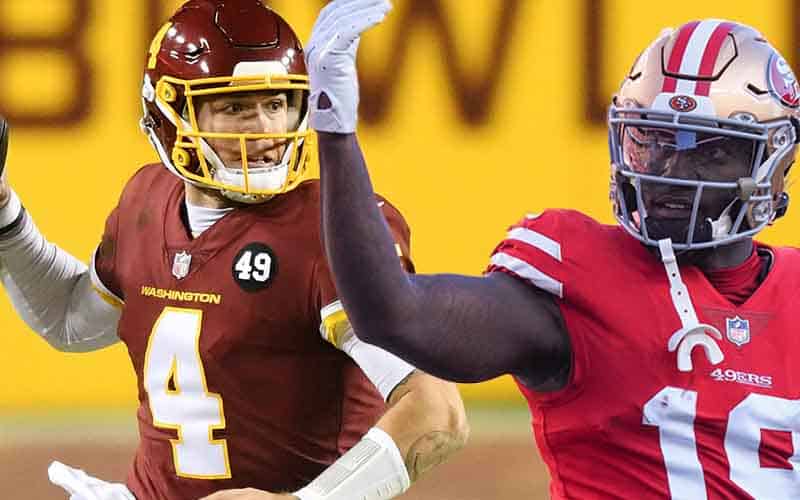 The latest batch of NFL Playoff picture odds has shifted in favor of the San Francisco 49ers and the Washington Football Team after each of them notched one in the win column thus placing themselves in a dead heat to qualify as a wild card team in the NFC.

Both the 49ers and Washington are off to slow starts to the 2021-22 NFL season, but the remainder of the NFC has fallen back to the middle, opening up wide avenues for San Francisco and D.C. to reach the playoffs.

The Los Angeles Rams were the preseason darling of many Super Bowl oddsmakers, but now the Matthew Stafford-led franchise is 7-4 and only one game ahead of the 49ers in the NFC East.

The Rams and 49ers will face each other for the second time in 2021-22 in Week 18. San Francisco holds the edge on LA due to their 31-10 beatdown that they handed them on November 15th, and their matchup on the final week of the season will almost certainly have playoff seeding implications.

With the Arizona Cardinals sporting a one-game lead on the Rams, the entire NFC West Division is in play, and with 6 more weeks of NFL action remaining, all three teams are likely contenders.

Up next for the 49ers are the Seattle Seahawks who just lost to Washington last night on MNF. Despite the Seahawks’ struggles this year, they still hold a win over San Francisco who must avenge that loss to keep their collective heads above water.

NFL betting sites may seem coy by only favoring San Francisco by a field goal, but these two rival franchises are overly familiar with each other and as we’ve already mentioned, the 49ers dropped a game to Seattle at home earlier this year.

However, Seattle cannot seem to get their offense into gear and they are struggling to place points onto the scoreboard this year. That is a recipe for disaster when facing the 49ers’ defense and their clock-control, run-focused offense.

When San Francisco is firing on all cylinders, opposing teams find themselves on the wrong end of the score with not enough time left in regulation to react. Barring any late-game turnovers, we expect the above NFL betting line to prove accurate.

The Las Vegas Raiders’ win over the Dallas Cowboys on Thanksgiving Day has them back on the postseason trail as they’ll face a similarly skilled opponent this weekend in the Washington Football Team.

The Raiders are favored by the customary 2.5 points that are granted to the hosting team for home-field advantage. This is a clear indicator of an even matchup where either team can win.

For further evidence of what pro football oddsmakers believe in regard to the postseason chances of Washington and San Francisco, have a gander at the following line for betting on Super Bowl 56.

The top 14 teams featured in the Super Bowl futures at any given time can give a glimpse of potential postseason qualifiers and is useful research for NFL Playoff betting.

The above NFL futures line places the 49ers at 13, suggesting they’ll make the playoffs, but D.C. will end up on the outside looking in.