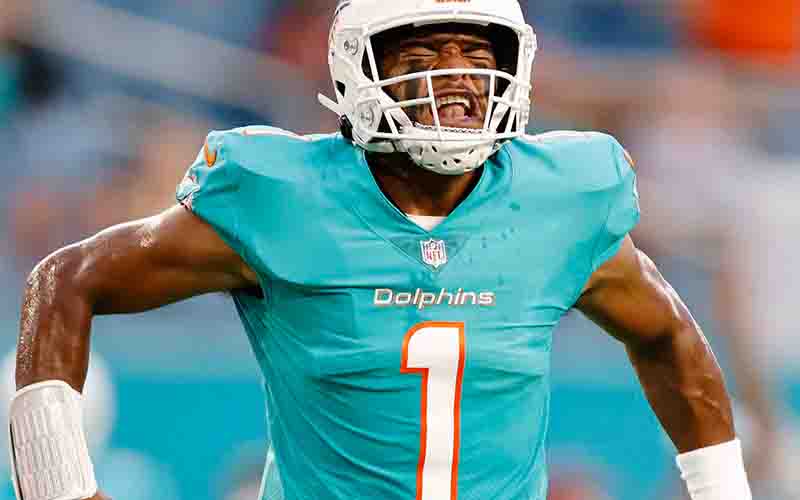 The once 1-7 Miami Dolphins would claim the number 7 seed in the AFC and a wild card spot in the NFL Playoffs if the season ended today after winning their sixth game in a row last night by taking down the New Orleans Saints on Monday Night Football.

The Dolphins are now in control of their own destiny and will make the postseason if they win their next two games against the Tennessee Titans and New England Patriots.

The latest futures odds posted at online NFL Playoff sportsbooks include moneylines for the Miami Dolphins that suggest their chances of winning their next two games are not good even though they’ve reeled off six straight.

The odds for betting on the New England Patriots and their chances of winning the AFC East have taken a hit following their loss to the Buffalo Bills this weekend.

Odds To Win The AFC East

All three of the above AFC East teams are currently ranked within the top 7 teams in the AFC, but because the Patriots and Dolphins face each other in Week 18, one of them will definitively lose or tie a game before the 2021-22 NFL season is over.

Next Sunday, both the Dolphins and the Titans will need to win to maintain their current postseason position, and NFL point spreads across online sportsbook sites are favoring Tennessee by a field goal.

The Titans were able to build a massive cushion in the AFC South early on in the season prior to their star running back Derrick Henry going down to injury.

Over those first few weeks of the year, Tennessee swept their two-game series with the Indianapolis Colts, pretty much securing the Titans the division title at midseason due to the lousy play of the Jacksonville Jaguars and Houston Texans.

The Colts have since narrowed the margin between them and the Titans and have forced Tennessee to keep winning if they intend to clinch the AFC South.

Because Indianapolis lost both games to the Titans in 2021-22, Tennessee is just one win away from winning the division, and how sweet it would be for QB Ryan Tannehill to get it done against his old team – the Miami Dolphins.

The current NFL Playoff bracket and betting odds aren’t suggesting much hope for a deep run for Tennessee, but that can and will change once Henry returns to active duty.

Because of their large lead in the division, the Titans have been able to rest Henry so there is a strong possibility that he can be 100% once Wild Card Weekend ensues in just over fourteen days.

What’s intriguing is that although there are merely two more games remaining on the 2021-22 NFL schedule, only one team, the Kansas City Chiefs, have clinched a playoff berth.

That scenario will change this weekend, but it is highly likely that many NFL Playoff spots will be decided during the final weekend of the year.