Former Dolphins Coach Brian Flores Sues Everyone For Everything 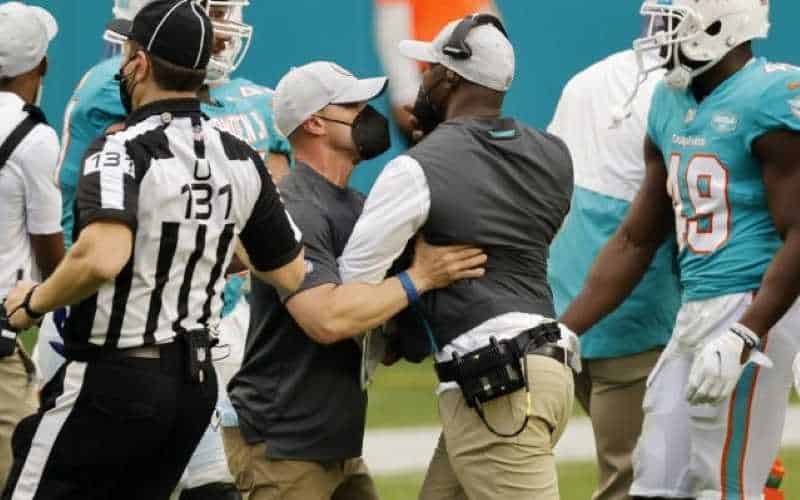 In a week filled with football drama and Commie nonsense, the most ridiculous development has arguably been that of the class action lawsuit filed by former Miami Dolphins head coach Brain Flores.

According to Flores – who was fired by the Dolphins after going 24-25 over his three-season tenure – the NFL is all kinds of awful to people like him. And on top of that, NFL owners are degenerate gamblers who try to cheat their way to the top!

This, of course, really only seems to be the case after somebody incompetent loses a job they never deserved in the first place and – in Flores’ case – after said loser didn’t get hired for another job he also didn’t deserve.

See, Flores is mad because he thinks his sub-.500 career record as an NFL head coach entitles him to any NFL head coaching job he wants.

When the New York Giants didn’t hire the known pedestrian commodity that is Flores and instead took a chance on the unknown but very promising commodity that is former Buffalo Bills OC Brian Daboll – who, for the record, owns more Super Bowl wins than Flores as a coach (five), won an NCAA CFP national championship (Alabama, 2017), and earned the 2020 AP NFL Assistant Coach of the Year award – Flores decided to upend his entire career by blaming everyone else for his documented inability to win football games.

You see, Flores has accused the Giants of – what else – racial discrimination.

He’s also accused the Broncos of the same thing.

The racist Giants are racist because they didn’t hire Flores over a better and more accomplished candidate, while the racist Broncos are racist for making Flores wait a few minutes before his scheduled interview commenced, or something.

Both of these things, according to Flores, are blatant Rooney Rule violations.

Sports, as we all know, is (supposed to be) a meritocracy. If you’re the best man for the job, you get the job. Hell, that’s even true in women’s sports, these days.

Thus, because the NFL mandates such an unenforceable feel-good directive like the Rooney Rule – which requires teams to interview at least two external minority candidates for all head coaching jobs no matter who they really want to hire – the NFL actually undermines every single minority candidate.

The Rooney Rule makes interviews perfunctory. No such candidate is going to surprise the interviewees or otherwise unexpectedly endear himself to the franchise.

NFL teams have to follow the Rooney Rule and conduct these pointless interviews, yes, but that’s solely the league’s fault.

So, if a team is forced to make people sit through baloney interviews because the make-believe narrative is that multibillion-dollar companies don’t already know exactly who they want to hire – and in what order they favor each candidate – long before any interviews commence, this is what you get.

All the Rooney Rule does is waste everyone’s time and ensure that phony claims of “inequity” can continue to make the front page of ESPN.

Plain and simple: Until the NFL mandates that all head coaches in the NFL must be minorities, this “problem” isn’t going away.

The other “problem” Flores claims exists is more related to what we do here at SBL: gambling.

See, Flores claims that in 2019, Dolphins owner Stephen Ross ordered him to “tank” for, presumably, Joe Burrow. The owner is alleged to have offered Flores $100,000 per loss. And that, says Flores, goes against everything he stands for.

Probably because – as his record demonstrates – he doesn’t stand for actually winning football games.

(Plus, are we really going to pretend that #TankForTua wasn’t a huge thing in Miami and across America before Tagovailoa got hurt and Burrow stole his thunder?)

Per Flores, on the tanking request:

“That was a conversation about not doing as much as we needed to do in order to win football games. ‘Take a flight, go on vacation, I’ll give you $100,000 per loss’ – those were [Ross’] exact words. I deal in truth, I tell the players this, as well. I’m gonna give you good news, bad news – but it’s going to be honest.”

And all that honesty will come spilling out just three years after the fact!

Of course, the Dolphins deny these claims, calling them “false, malicious, and defamatory.”

But even if the claims were true and the Dolphins did ask Flores to phone it in for the top pick (and the request wasn’t just a tongue-in-cheek joke from an old man in passing), that would hardly be controversial.

In fact, tanking for draft picks is so uncontroversial that some leagues – like the NBA – have to employ a draft lottery to guard against it. And teams still tank.

Burrow, as a reminder, is playing in Super Bowl 56 next week. For the Bengals.

Tanking is sensible, and there’s no way to prevent it.

If Flores really was asked to tank and refused, it seems unlikely that the Dolphins would have continued paying the guy for two more years of insubordination.

At any rate, tanking is such an obvious strategic move that those looking for real smoking guns in Flores’ nonsensical and unfalsifiable – and very, very conveniently timed – claims have resorted to going on gambling-related flights of fancy.

Some idiots even think the Dolphins owner wanted Flores to tank so he could bet against his own team at the sportsbooks. That makes no financial sense any way you slice it, but the real motive for tanking is so mundane and accepted that this is all Flores’ supporters can muster.

Meanwhile, other hacks have taken this tack and made it all about you.

From a recent piece (of trash) at Yahoo Sports:

“With the legalization of sports betting in various states across the country, sports leagues have gotten involved as they recognize the untapped potential in the market. The NFL is no different. Prior to the start of the 2021 NFL season, the league announced a partnership with seven sportsbooks, including BetMGM.

To be fair to the NFL, it does the most…to aid sports bettors. The league forces teams to release injury reports every Wednesday, Thursday and Friday, showing which players are practicing and what specific injuries are ailing players. The NFL also forces teams to announce inactive players more than 90 minutes before kickoff. …

Any goodwill the league has built up among bettors will quickly be lost if it doesn’t thoroughly investigate these latest allegations from Flores.”

Because as we all know, sports bettors are illiterate rubes who never factor in bigger-picture realities that might dictate how a team plays in any given game.

Let’s be real: No NFL betting enthusiast is savvy enough to know that a 2-12 team with no franchise quarterback probably won’t be leaving it all on the field in their last three games with the number-one pick on the line.

No mind could ever be clever enough or evil enough to penetrate that kind of high level, unsportsmanlike strategery.

For crying out loud.

In the end, Brian Flores will join all the other former Bill Belichick assistants in the dustbin of NFL head coaching history.

Right where they belong.

Pro-tip for the next Dolphins head coach: If you’re going to be a sore loser, Miami probably isn’t the job for you.