2021-22 AFC South NFL Betting Preview: Can Julio Jones Get Titans Over The Hump? 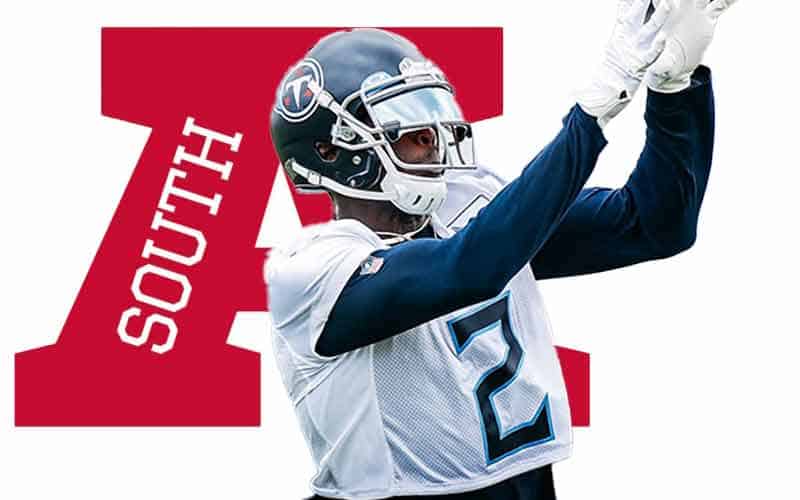 The Tennessee Titans and the Houston Texans have been existing on the cusp of excellence for the past few seasons, and as one of them appears poised to climb that next step, the other is positioned to dismantle their roster and start fresh.

The NFL is a league of regeneration and youth, and nowhere is that more evident than in the AFC South Division where inexperience now outweighs veteran moxie save for the Titans and their enhanced roster for the 2021-22 season.

Online NFL betting sites have mustered up their futures odds predicting the fate of the AFC South in 2021-22, and we’ve compiled the moneylines from the top 3 football sportsbooks for comparison.

78 receptions, 1000+ yards, and 6 or more touchdowns are what NFL prop bets at Bovada are suggesting will be the benchmarks for wide receiver Julio Jones in 2021-22. If the Tennessee Titans can garner that type of production out of their free agent WR acquisition from Atlanta, then they can certainly expect to contend for the AFC Championship and a shot at Super Bowl LVI.

Bovada has conspicuously removed all AFC South futures from the boards at the moment, and that is likely due to the extreme uncertainly surrounding the destiny of each of its teams, but that cannot be said for Tennessee.

The Titans are now fully loaded for bear on offense with QB Ryan Tannehill, the most dominant force in the NFL in running back Derrick Henry, and arguably the greatest wide receiver of the last decade, Julio Jones. An AFC South championship for Tennessee should be a given in 2021-22. The only question is how far do the Titans advance in the NFL Playoffs?

While the core of Indianapolis – their offensive line and defensive front seven – remains their strength, the most important position in football is inarguably the quarterback. The Colts acquired Carson Wentz from the Philadelphia Eagles to take a crack at the starting QB role, and if his injuries clear up in time, he’ll be the starter for game 1.

We haven’t closed the books on Wentz’s playing career, and there are certainly some elements in place on the offense to help ease him back into a starting spot in the NFL. Expect flashes of brilliance from the Indianapolis Colts in 2021-22, but ultimately, this will be a campaign where they find their identity and prepare for the future.

2021-22 Prediction: Will Finish 2nd In AFC South But Miss Playoffs

After acquiring the #1 pick in the 2021 NFL Draft, the Jacksonville Jaguars selected quarterback Trevor Lawrence out of Clemson University who will be under center when their offense takes the field the weekend after next.

Lawrence has struggled in the preseason, and the Jaguars’ odds for betting on the NFL Playoffs suggest that they’ll be nowhere near the top 7 teams in the AFC, however, he does provide stability and something for the organization to build off of.

This will not be the season that the Jaguars finally bequeath their cloak of sorriness and step into the spotlight, but there will be some signs of life under Lawrence and head coach Urban Meyer. The Jaguars do have the potential to compete for 2nd place in the AFC South if the Colts perform worse than expected.

Once again, quarterbacks are driving the odds as the Texans are in dire straits from a personnel perspective due to the legal struggles of QB Deshawn Watson. He is facing numerous sexual misconduct allegations and the Texans have him on the trading block. Currently, the Miami Dolphins are expressing interest in Watson’s services.

As long as Watson suits up for Houston this season, they should be no worse than mediocre, but given the probability of Deshawn being traded or missing time for legal issues, the overall outlook is grim.

As mentioned above, Bovada has removed their AFC South futures altogether, and Watson likely has a lot to do with that decision.

2021-22 Prediction: Will Struggle To Compete for This Season – Last Place

We’ll leave you with this one final nugget of advice. The dismal outlook of the AFC South is presented clearly in the below Super Bowl betting odds presented by MyBookie. Given the legitimate potential of the Tennessee Titans hoisting a Lombardi this year, the below AFC South odds of +1300 may be worth an early wager.

Division To Win The Super Bowl