NCAAF Betting: Who Will Be The Next Top 5 College Football Team To Fall? 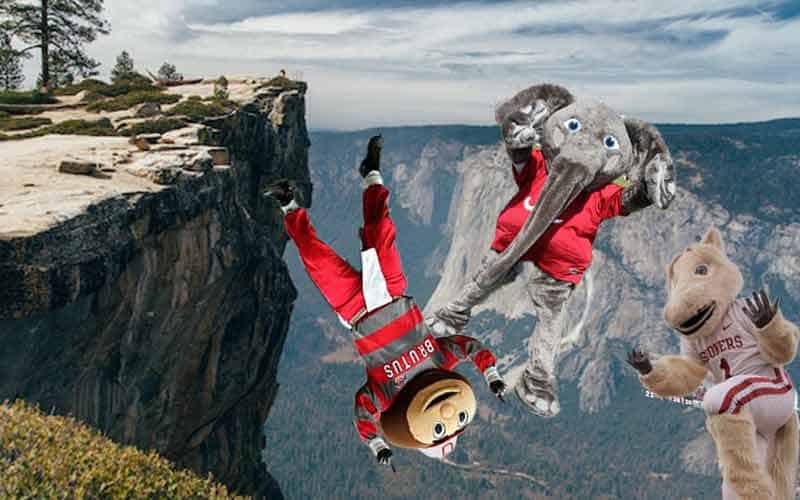 It seems that as each weekend passes, another top College Football team suffers a loss and is left to reevaluate their CFP potential. The most recent highly-ranked NCAAF team to fall were the Iowa Hawkeyes who relinquished their third overall ranking by dropping a game to the Purdue Boilermakers.

Is there a team whose odds at online college football sportsbooks place them at risk of being the next big dog to lose their top status? The outlook is not likely, however, Alabama was not expected to lose to Texas A&M and the Oregon Ducks were predicted to blow out the Stanford Cardinals. Neither happened.

The #1 Georgia Bulldogs are off this weekend, so they’re safe. Up first at noon EST are the third-ranked Oklahoma Sooners of the Big 12 who will be rolling into Kansas and are predicted to easily pick up a win over the Jayhawks in David Booth Kansas Memorial Stadium.

The Sooners are favored to reach the College Football Playoffs at CFP betting sites, which indicates a strong potential for them to run the table in the Big 12 and finish with an undefeated record.

Oklahoma has not lost to the Jayhawks in nearly a quarter-century and is currently sporting a 16-game winning streak against Kansas. Will Saturday provide an upset that’s been 24 years in the making? Don’t bet on it.

Also at noon, the Cincinnati Bearcats try to keep their unblemished record intact against the Navy Midshipmen who are currently 1-5. Again, the point spread is enormous, and the Bearcats will likely need to hover close to that line in order to retain relevance in the minds of the College Football Playoffs Selection Committee.

Any close contests from here on out for Cincinnati could spoil their odds to win at College Football National Championship betting sites, but most books have them lingering around the top four as of this writing.

The 4th ranked University of Alabama Crimson Tide hosts the Tennessee Volunteers this Saturday with a kickoff time slated for 7:00 PM.

Again, another 20+ point woodshed whipping is implied by the above college football betting line on the Crimson Tide versus the Volunteers, but when spirited rivals compete in the SEC, anything can happen.

Alabama quarterback Bryce Young is the current leader in the Heisman odds, but he and his Crimson Tide teammates may need to win against the Georgia Bulldogs in the SEC Championship Game to make it into the CFP, but they’ll need to get through Tennessee at home first.

At 7:30 PM the Ohio State Buckeyes host the Indiana Hoosiers in what should be another in-conference white-washing, at least on paper.

Good luck to anyone trying to pluck a gem out of the above NCAAF odds, but this writer cannot deny the appeal of those gigantic moneylines and their potential payouts, especially when each weekend of college football action keeps delivering surprising upsets.