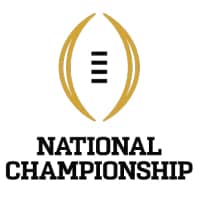 Betting on college football carries the same pomp and circumstance as the game itself, and there’s no bigger stage than the national championship. Because of this, we’ve laid out everything you need to know for the 2022-23 CFP national championship, including betting odds, prop bets you’re likely to see, and how to bet legally and safely during this year’s final contest.

Is It Legal To Bet On The College Football National Championship?

Yes, there are two ways to bet on the 2022-23 CFP National Championship legally:

There are some misconceptions about betting sites operating outside the US, so let’s clear those up point-blank. There is not a single law that prevents you from betting on college football - or any other sport - at offshore sportsbooks. Federal gambling laws do not mention wagering with an international betting site, so if there's no rule to break, bettors cannot get into any trouble.

Below you’ll find the best betting sites to bet on the national championship for NCAA college football. You will also find game lines for betting on bowl games, division championships, and more.

These online sportsbooks offer lines and odds for the CFP title game to bettors in countries all over the world, and some have been in business for nearly two decades when internet gambling first started getting popular due to Nevada’s monopolistic control over the market in the US. You won’t find any sportsbooks in the United States that can compete with the sheer value and volume of national championship game betting options that these sites provide.

How To Bet On The CFP National Championship

If this is your first time betting on odds to win the CFP National Championship, then this section will detail the steps you’ll need to take before placing a wager online.

Below are the current betting odds to win this season’s national title game at MyBookie Sportsbook. It’s no surprise that Alabama and Clemson sit alone atop the list with how dominant they’ve been since the playoff format was introduced in 2014-15. 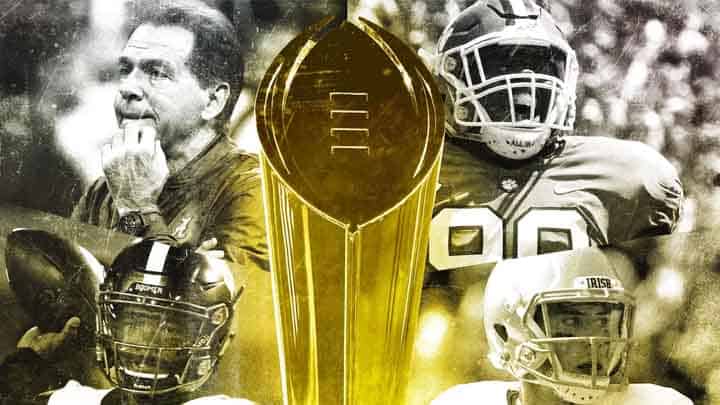 Is Mobile Betting Allowed For The NCAA Football Title Game?

Yes. All of the online sportsbooks we recommend have robust mobile betting platforms that come with the same features as their regular site. Regardless of whether you’re on the go or simply don’t want to leave the couch during the game, the sites we recommend have got you covered on Apple and Android smartphones, tablets, and pretty much any modern mobile device.

No download is required, as these applications are web-based, and can be quickly accessed by clicking on one of the sportsbook links in this guide using an up-to-date mobile browser.

On some occasions, it can become evident that a wager is going to fail very early on in a game. Oftentimes that makes for a lousy viewing and betting experience, but live, in-game betting can get the action cranked back up and have you stuffing cash in your bankroll by halftime.

Traditional betting practices require that all bets be made prior to the start of the game. Live betting allows for bets to be made on the CFP title game until the final snap. Odds are updated to reflect game developments, with lines offered for halftime leaders, winners, prop bets, totals, and more.

How To Watch The 2022-23 CFP National Championship

Despite the sport of American football beginning at the collegiate level in 1869, the inaugural College Football Playoff National Championship game was played at the end of the 2014-15 season and was the first title game in the Football Bowl Subdivision to use any kind of knockout elimination bracket to determine a champion. Previous attempts at implementing a system for determining an annual winner include the BCS, Bowl Alliance, Bowl Coalition, Coaches Poll, and Associated Press, among many others.

To be crowned the national champion of college football for the season, a team must first be one of the four teams selected to the College Football Playoff, which is determined by a 13-member committee in early December. Two semifinal games are then held during bowl season and the winners of each advance to the national championship game, where it’s winner-take-all for the title of “best team in college football.”