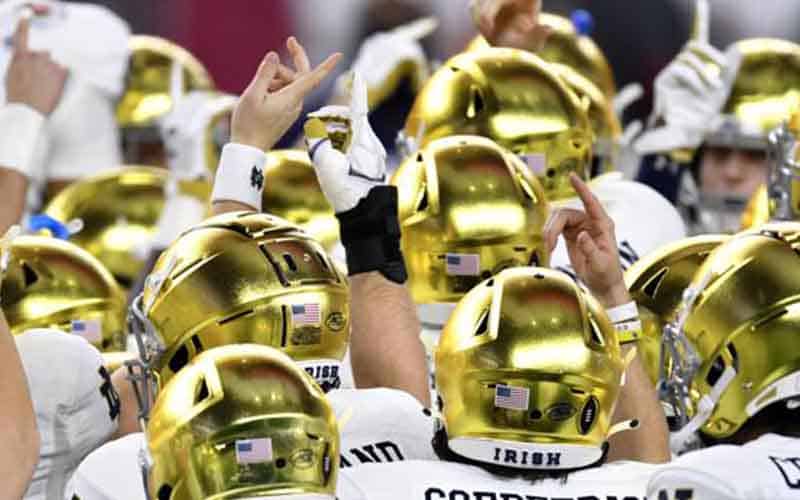 Just two weeks ago, Cincinnati fans were losing faith that their undefeated Bearcats would get a chance to compete for an NCAA College Football National Championship in 2021-22.

Now it appears that they are a lock to reach the CFP if they can manage to defeat the East Carolina Pirates tomorrow afternoon.

The University of Georgia has likely wrapped up a spot if they can win tomorrow against Georgia Tech, because even if they lose to the Alabama Crimson Tide, the Bulldogs have likely put in enough work to secure a CFP seed.

The final two CFP selections are up for grabs, and NCAAF betting sites are now projecting that the Notre Dame Fighting Irish are once again in play for the postseason.

Alabama is in if they win the SEC Championship, but if not, it will be difficult to place them in the College Football Playoffs as a 2-loss team.

An Alabama loss may be all that Notre Dame needs to make the playoffs, but the odds for betting on the CFP suggest that one position will be granted to the winner of the Big 12.

This Saturday, the #5 Michigan Wolverines face the #2 Ohio State Buckeyes, with the winner advancing to the Big Ten Championship Game the following weekend. If the Big Ten winner remains a one-loss team, their College Football Playoffs inclusion will be secured.

We believe that Cincinnati will beat East Carolina this Saturday and that Georgia and Ohio State will go on to win the SEC and Big Ten, respectively.  We’re predicting upcoming losses for Alabama and Michigan, which means that our projected CFP final four will look like the following.

If the above projections become reality in a few short weeks, Notre Dame can hold their heads high knowing that they’ve made a decent go of it prior to running into the buzzsaw that is the Georgia Bulldogs. This potential 1 vs. 4 matchup would likely feature a double-digit point spread in favor of the Dogs.

The above 2 vs. 3 could have the makings of a new in-state rivalry, and while it may seem like an obvious outcome that Ohio State would be the victor, the Buckeyes did manage to somehow drop a game to the Oregon Ducks earlier this year – anything can happen.

Cincinnati was left out of the final four last year despite finishing with a 9-0 regular-season record. They faced the Georgia Bulldogs in the Peach Bowl, losing by a respectable 24-21 final score.

This season it appears that the Bearcats will have a chance to play with the big boys as long as they can take care of business this Saturday, and NCAAF National Championship betting sites will payout big if they can go all the way.

A bet of $1 on the Cincinnati Bearcats to win the 2021-22 CFP National Championship will net $25 if they can win back-to-back games in the playoffs. Oddsmakers believe that it is the University of Georgia’s title to lose, but games are decided on the field and not on paper.