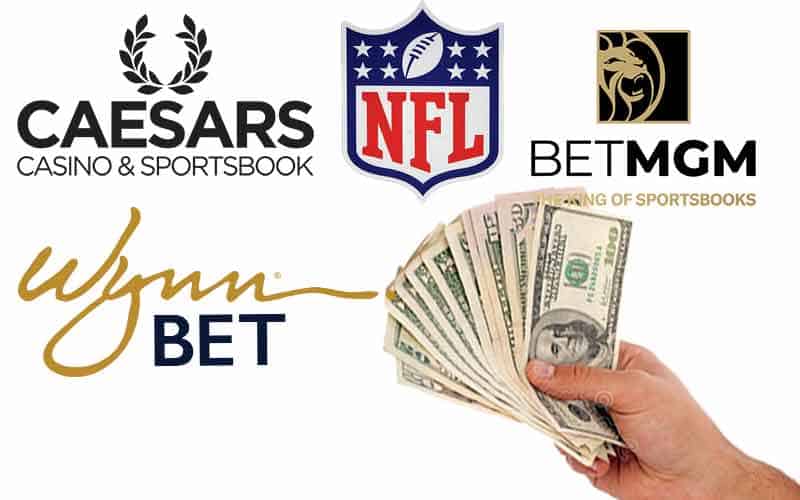 The first weekend of NFL action has concluded and the league is ecstatic about its gargantuan television ratings that represent the most viewers for Week 1 games in five years.

CBS reported its highest Sunday numbers since 1998, and legal online sports betting and its expansion over the past 18 months are a likely factor to these growing pro football audiences.

Sure, there are fewer protests going on during pre-game ceremonies, and there’s also less focus placed on them by media outlets, but there is also no denying that the impact of sports betting in the USA is created added interest in the National Football League.

The additional viewership totals were matched by added action being laid at NFL sportsbooks, and many of them raked in loads of revenue during the Week 1 games. Here are a few of the highlights.

We wrote recently about the NFL point spread for the Green Bay Packers and the New Orleans Saints changing from 3.0 to 4.5 once the game was relocated to Jacksonville from the Mercedez Benz Superdome in Louisiana. The Saints not only covered the +4.5 points, but they also blew out the Packers by a final score of 38-3. BetRivers reported over 80% of customers were betting on the Packers to win.

Domestic NFL sportsbooks WynnBet and Caesars Sports both featured in excess of 80% of the total action laid on the San Francisco 49ers covering 9.5 against the Detroit Lions on the road. The 49ers appeared to be well on their way to an easy cover, but a late two-touchdown rally by the Lions closed the gap to 8 as the closing seconds ticked off the clock.

Other big-time losers at state-regulated sports betting venues include:

Although Commissioner Roger Goodell is generally opposed to betting on sports and its attachment to pro football, the door is wide open for engagement with gaming interests, and many franchises and stadiums are already partnering up.

In-stadium sportsbook lounges and betting kiosks will be commonplace before long, and in-game advertising with point spreads, moneylines, and the over/under is already listed right next to the score on many networks

There is also more focus on the NFL odds in pregame analysis, indicating that broadcasters are aware that the bettors are watching, and driving advertising revenue at an increasing rate each year.