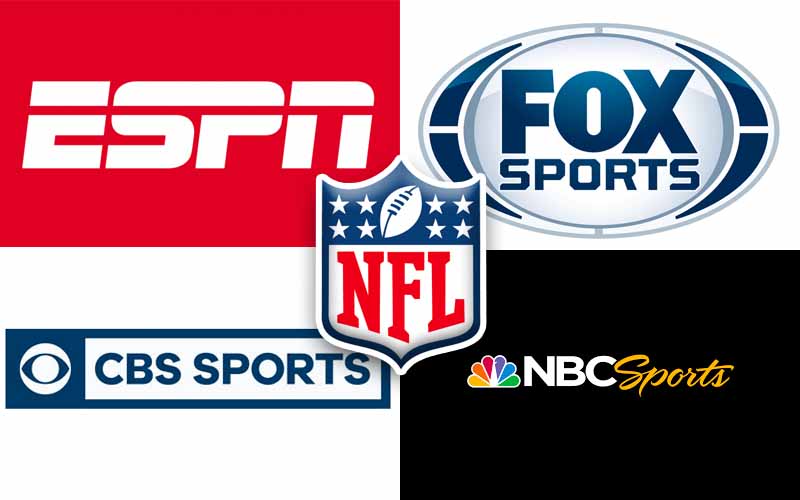 Actually, that last one is really important.

But if your a sports fan or a sports bettor in any capacity, what you need to be on the lookout for this football season is the newest war being waged by the major TV networks.

With both the 2019 season and wagering on the NFL kicking off Thursday night, make no mistake: The “Sports Betting War” has officially begun.

The Green Bay Packers stifled the Chicago Bears in their 10-3 road victory last night to kick off the 100th season of the NFL, which saw the Packers (+3) easily cover the spread as well as the matchup’s over/under falling well below the 46.5 total points set by the sportsbooks.

Throughout the evening, you may have noticed NBC frequently advertising their free-to-play Sunday Night 7 game that allows fans watching Sunday Night Football the chance to answer questions and win “HUGE cash prizes.”

The prediction game starts this Sunday with the Week 1 matchup between the Pittsburgh Steelers and the New England Patriots, but this is only a taste of what’s to come.

So why is now the time to start rolling out the risk-free prediction apps that closely resemble betting lines and prop bets found at sportsbooks?

You could call it—for lack of a better term—a “gateway” into sports betting based solely on the timing of their implementation.

According to the Pew Research Center, the majority of Americans have owned a smartphone since 2013, and today, 81% of the country has one in their pocket.

ESPN, FOX, and CBS—along with NBC—all have broadcast rights to NFL games for the foreseeable future, and they know the future of sports is closely tied to the soon-to-be nationwide betting market.

It’s no secret that football is by far the most wagered on sport in the United States, and a recent study found that 38 million American adults—approximately 15% of the US adult population—plan to place a bet on the 2019 NFL season.

Estimates vary widely, but most studies put the amount bet on college football and the NFL in the $100 billion range annually—making up two-thirds of the roughly $150 billion wagered on all sports each year.

As more studies continue to come out, you’ll see the word “engagement” pop up more often too since current viewership studies have found that more engagement means a more valuable product, which in turn, means companies can make more money from advertisement and sponsorship deals.

And all of this comes before most states jump into the market following the US Supreme Court decision nearly 16 months ago to lift the federal ban on sports betting.

And more are coming: Illinois, Montana, New Hampshire, North Carolina, Tennessee, and Washington DC have all signed bills into law and are pending launch.

It was reported in late August that Americans have legally bet $10 billion on sports at state-regulated locations from May 2018 to July 2019. That figure only accounted for 10 states, and three more states have since opened sportsbooks.

The American Gaming Association predicts that if all states legalize sports betting, then sportsbooks will generate a total of $9 billion in gross revenue annually. Depending on each individual state’s tax rate, it’d be reasonable to expect sports betting to generate $1 billion in new tax revenue in total for the state’s budget.

Since most sportsbooks have a hold percentage of around 5% on average (the profit made from all bets placed), we can see that if all 50 states are on board, Americans are expected to bet close to $200 billion each year.

With that kind of cash up for grabs, it becomes easy to see why the TV sports networks have a vested interest in placing their bet on the future of the rapid-growing US sports betting market.

There are four major players involved waging the “Sports Betting War”—ESPN (part of ABC), NBC, CBS, and FOX—so let’s breakdown each of the networks battle plans heading into the NFL season.

The Disney-owned Entertainment and Sports Programming Network (better known as ESPN), which was merged with the sports division of the American Broadcasting Company (ABC) in 2006, is playing it the safest out of all the major sports media companies.

But that doesn’t mean the worldwide leader in sports hasn’t been making moves. ESPN partnered with Caesars on the one-year anniversary of the Supreme Court decision to provide betting lines and odds for all sports events.

Along with launching informative shows for bettors, such as I’ll Take That Bet and Daily Wager, ESPN will open a new studio on the Las Vegas strip in 2020.

Unlike the other three other big players, Disney appears to be the timidest to dip ESPN’s toes into the sports betting water and potentially tarnish its family-friendly brand. Here’s what CEO Bob Iger said in a February earnings call:

“I don’t see The Walt Disney Company, certainly in the near term, getting involved in the business of gambling, in effect, by facilitating gambling in any way.”

Well, that didn’t stop Iger from taking the 11% stake in DraftKings when the deal to buy 21st Century Fox for $71.3 billion officially went through in March 2019. Despite Iger saying that Disney isn’t “in the business of gambling,” sorry Mickey Mouse, you own a sportsbook now.

Tens of millions of NFL fans tuned into to watch Packers-Bears last night on the National Broadcasting Company (NBC), which is owned by Comcast, and the network saw this as a perfect opportunity to advertise its NBC Sports Predictor app.

As mentioned above, the app, starting with Steelers-Patriots in Week 1, will feature a new game called Sunday Night 7, which asks participants seven questions before the Sunday Night Football kicks off.

The questions appear to be ripped straight out of a sportsbook, with contestants being asked “How many total points will be scored?” and “Which quarterback will throw for the most passing yards?” among many others.

However, there is no monetary risk for the player since it’s a free contest and NBC Sports said it would give away $100,000 in guaranteed prizes each week, totaling $2 million at the end of the season. Despite it not really being “sports betting” since no money can be lost, the timing of the rollout makes it pretty obvious that the network will use this as a test platform.

NBC Sports has already integrated informative betting streams, such as The Daily Line, into an extension of its official website, known as NBC Sports Bet, and has fully embraced the idea of providing information sports betting and fantasy sports.

But as more lawmakers pass sports betting laws for their states, it’d be hard to see NBC not wanting to place a bigger wager in the future.

The sports division of the Columbia Broadcasting System (CBS), which is now under the ViacomCBS umbrella as of August 2019 and owned by National Amusements, has been rather sly and flow under the radar when it comes to its sports betting plans.

But CBS Sports is arguably pulling off the most controversial strategy of all the major sports networks.

If you use Google News or another news aggregate service, and you’ve searched for something like “NFL Week 1 odds” then you’ve probably seen CBS Sports filling up your feed. Here are the results of that exact search, and at the time of writing, they occupy three spots, and no other site has more than one.

If you happen to accidentally click on any of the many “CLICK HERE” links, it will take you their tout service—also known as Sportsline—where you can buy picks from the “Vegas Experts” for the low, low price of $9.99 a month.

Touting is a disgusting side of sports betting and leads to the rise of individuals like Vegas Dave becoming millionaires solely off goading gullible and lazy bettors into thinking their picks are a safe bet.

There is no such thing as a safe bet, but CBS Sports is content with telling you otherwise and willing to milk your wallet dry in the process.

FOX Sports—the sports division for the Fox Broadcasting Company, which used to be owned by 21st Century Fox but now is solely owned by Fox Corporation after 21st Century Fox was officially bought by, you guessed it, Disney (ok history lesson over, back on topic)—is the sports network that’s got the most consider “at-risk” when it comes to the future of sports betting.

Why is that you ask? Well, this week was the launch of their very own mobile sports betting app, known as FOX Bet, in the legalized New Jersey market, becoming the first major US media company to offer a regulated sportsbook. Like the NBC Sports Predictor app, FOX Bet will offer a free-to-play contest with cash prizes.

However, in the NJ market—and Pennsylvania as well in the coming days—anyone who is at least 21 years old and is located inside state lines can place a bet on the NFL, college football, or any other sport via the FOX Bet app.

The network has already stated it plans to expand into more states as legislation is passed and its licenses to operate a sportsbook in the jurisdiction is approved.

Despite my qualms with the CBS Sports tout service, what FOX Sports is doing might be worse in some people’s eyes, but I happen to think it’s the boldest of the bunch. The lines of sports and betting will soon become blurred, and FOX Sports is refusing to miss out on the action.

And with FOX Sports having the rights to broadcast Super Bowl LIV in 2020, you can bet that you’ll see a lot of FOX Bet in the weeks and months leading up to—and during—the finale of the NFL season.

Like any of these “2019 wars,” there won’t really be a winner or loser, and the “Sports Betting War” between the major TV networks will be no different.

In the end, a competitive marketplace is usually always a win for the consumer. Legalized sports betting is expected to increase the value of the NFL by $2.3 billion, which in turn should lead to a better product if the principles of economics hold up.

But I can’t help but wonder whether the major TV network will take the time to educate first-time sports bettors on how to bet responsibly and manage a bankroll.

Providing news, injury reports, and tracking player and team performance is one thing, but supplying supplementary money management tips and strategies to curb problem gambling is another—and none of the TV networks have begun to present the public with that kind of information.

With $9 billion up for grabs—money that is generated from the public losing bets at sportsbooks—the odds of sports media networks teaching responsible practices are likely not in our favor.