Why ESPN is going ‘all-in’ with sports betting 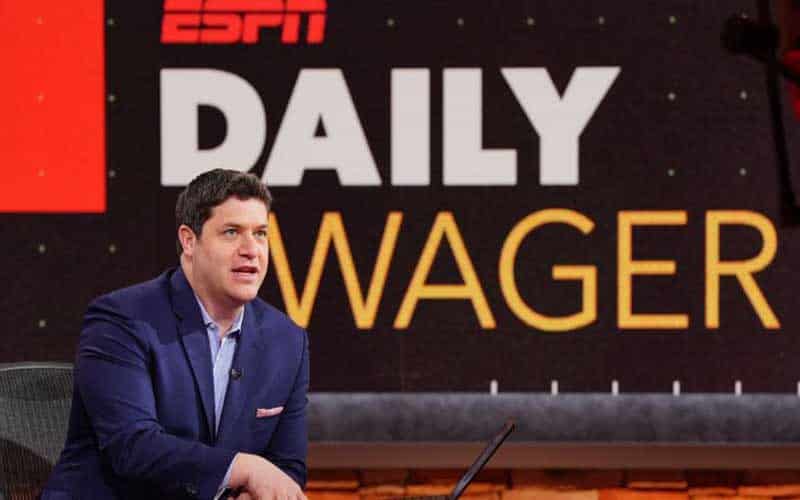 All the sports betting talk this week has been about Iowa and for a good reason: It became the 11th state to offer legal sportsbooks yesterday.

But what you probably missed will have a much bigger impact on your day-to-day sports viewing experience.

Of course, I’m talking about ESPN’s latest push to integrate sports betting into everything the worldwide leader in sports owns.

ESPN issued a press release Wednesday announcing the network is moving Daily Wager, its hour-long sports betting news and information show, to a larger audience on ESPN2 starting on August 20.

Currently, Daily Wager, which debuted back on March 11, airs 6-7 pm ET Monday through Friday on ESPNEWS.

The network is also adding a “Sunday morning edition” of the show hosted by ESPN sports betting analyst Doug Kezirian, which will air at 9 am ET on September 8 — the first Sunday of the 2019 NFL season.

The Sunday show will air on ESPNEWS at first then, like its daily broadcast, move to ESPN2 on September 29.

Ilan Ben-Hanan, who oversees and manages ESPN’s sports betting programming, said in the press release: “Daily Wager has caught on with our viewers and now we look forward to serving even more sports fans with the move to ESPN2. And the addition of a new Sunday morning edition this fall will expand the audience even more during a very busy time of the year.”

And while Daily Wager moving to a more-viewed channel is a significant change on ESPN’s programming schedule, the end of the press release provides the most insight into where the network is heading in the future.

“Also on August 20, ESPNEWS viewers will notice a change in the look of the channel as the screen is modified to include surrounding graphics related to sports betting news, lines and information 24 hours a day, with the exception of during live event telecasts. The same format will appear on ESPN2 during Daily Wager episodes.”

In other words: Starting next week, ESPNEWS will feature betting lines, odds, and other wagering information 24 hours a day, 7 days a week, and 365 days a year.

The network’s change to feature betting information is likely only a test-run to gauge public interest. But, if successful, it will one day be remembered as a necessary step after the sports betting integration inevitably takes root on ESPN’s main channel.

Ever since the US Supreme Court repeal of PASPA — the federal law that had prohibited states (excluding Nevada) from legalizing sports betting — on May 14, 2018, everyone at the top of the sports industry and the sports gambling industry began to make their moves to capture a portion of the changing landscape.

As predicted on the one-year anniversary of PASPA, with state lawmakers pushing to legalize sports betting in their respective jurisdictions, networks with sports coverage around the country will look for a way to blur the lines between “sports” and “betting.”

After all, as with any new market, there is money to be made — nearly $8 billion dollars was wagered in the eight states with legal sportsbooks one year after the Supreme Court decision — and the cheaper it is to get a foot in the market, the easier the decision is to make.

Despite some sports media companies, like CBS Sports, hitting Google News with a seemingly endless barrage of stories containing content locked behind a “subscribe to see our picks” paywall and others, like Fox Sports, outright launching their own sportsbook, the Disney-owned ESPN has taken a slow and methodical approach.

And their approach is one that’s actually looking out for the inexperienced bettors since providing a wealth of information is one of the best ways to help the public avoid the pitfalls of betting or gambling in general.

The network will hopefully use its platform to discuss things to help prevent problem gambling like why “chasing your losses” is a bad idea, just as an example.

While ESPN won’t be running a tout service or opening a sportsbook any time soon, the network has been making moves nevertheless, partnering with Caesars for betting information, building a studio in Las Vegas, and launching Daily Wager being the most notable among them.

More states will soon follow — as many as half of the US could have legal sports betting bills signed into law by the end of the year — and this week’s announcement from ESPN that integrates betting into sports broadcast isn’t the first and definitely won’t be the last.

And you can bet on that.