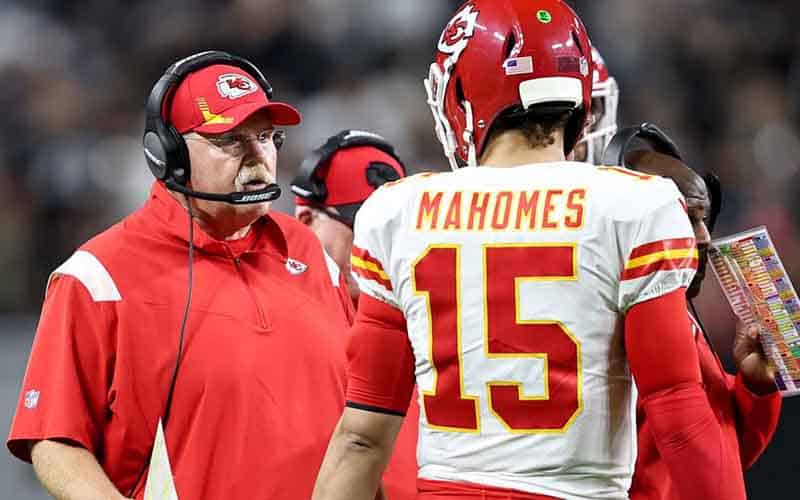 After each weekend’s NFL games conclude, our staff here at Legal Sports Betting pulls together the current standings and the pro football playoff odds and create brackets for both to use for gambling research and comparative purposes.

The two brackets for NFL Playoff picture odds illustrate the difference between the current standings and what oddsmakers are suggesting will occur once the postseason tournament begins.

The Kansas City Chiefs have been just behind the Buffalo Bills in the odds to win the American Football Conference and advance to Super Bowl 56, but their slow start placed them as the clear-cut bottom team in the AFC West early on.

Following KC’s 41-14 beatdown of the Las Vegas Raiders on Sunday Night, the odds for betting on the Chiefs to win Super Bowl LVI are beginning to look a lot more reasonable.

Get this. A $1 wager placed today on the Kansas City Chiefs to win the Super Bowl can payout at $10.50 next February, so perhaps it is due time to consider making a low dollar hedge before oddsmakers get wise.

The 2021-22 NFL season is by no means a wrap for the Chiefs, however, as their remaining schedule contains formidable opponents through January.

While the Chiefs are unlikely to make that seven-game run without suffering a loss, four of those contests will be played at Arrowhead Stadium. They’ll need to win against the Los Angeles Chargers in Week 14 by 7 or more points in order to gain the head-to-head edge, but there’s a chance that KC could be far enough ahead in the standings to still outrank them.

The AFC West futures posted at NFL Playoff betting sites suggest that the Chargers are the franchise that will compete the most closely with the Chiefs for the division title, but the differential in the moneyline odds imply a solid likelihood of KC ending up on top of LA after 17 weeks.

Still, the Chargers are by no means out of the race for the west. They’ve got the aforementioned win against the Chiefs from earlier in the season, so if they can beat them twice, they’ll only need to finish with the same win-loss record to surpass them in the standings.

The road to the NFL Playoffs for the LA Chargers is not as rocky as their Missouri-based division mates to the east, giving them plenty of potential to finish within reach of KC.

While the battle to win the AFC West could come down to the final weeks of the season, bets on those NFL futures odds should be placed right now in order to secure the highest payouts possible.