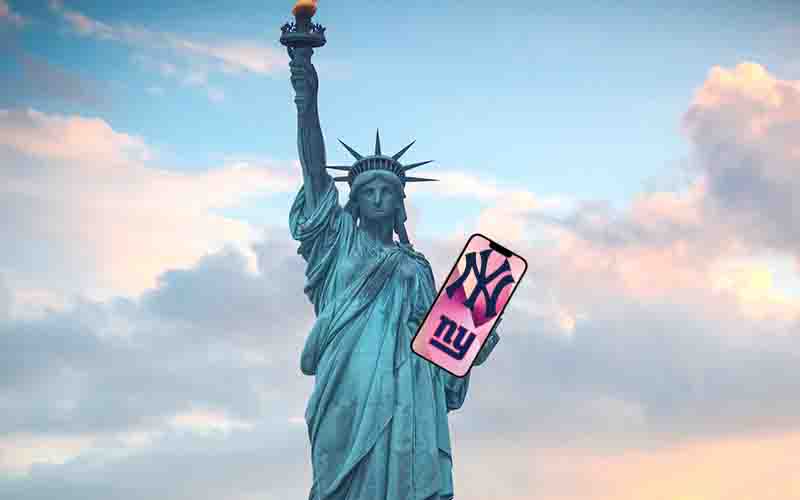 One of the last major initiatives of disgraced former New York Governor Andrew Cuomo was to debut mobile sports betting apps in order to make up for significant budget shortages.

Legal sports betting in New York via domestic operators has been available in a few upstate casinos since 2019. Revenue reports for New York state have been sluggish thus far because travel is required to place a wager on professional and collegiate games.

Despite the Empire State being the fourth most populated in the country, revenue collections for sports betting in New York have yet to surpass $4 million – until now.

The rationale is also transparent – mobile sports betting does not force gamblers to leave the house to place a wager, whereas New York state’s casinos required hours of travel for some.

With New York being surrounded by other states that have already enacted regulated sports betting, upstate travel became more unreasonable as nearby territories were often closer than the tribal sportsbooks in proximity to the Canadian border.

That is no longer the case as legal sports betting apps allow for bets to be made by 21+ patrons in New York City or anywhere else inside state lines with a connection to the web.

By rolling out sports betting apps in New York in early January, proceeds from betting on the NFL Playoffs were able to be captured in their entirety throughout the Wild Card, Division, and Conference Championship rounds.

While Super Bowl betting encompasses the single largest wagering day of the calendar year each February, once the game is over, activity lulls until NCAAB Conference Tournaments begin in early March.

Have a look at the New York sports betting revenue collection differential from January and February of 2021:

Is February 2021’s dropoff of 68% from the prior month’s collection numbers what we can expect for New York in 2022?

The over/under could bet set at $36,096,270 for February 2022 collections based on the above data, but with NY mobile sports betting being so fresh to the market, it could surpass those numbers because of surging popularity.

New York is one of the first four US states to issue their sports betting revenue reports for January of 2022, and their expediency in doing so is in large part due to the Governor’s Office and their pride in the results.

NY Governor Kathy Hochul is up for reelection in 2022, and she’s posting these hefty numbers to reveal the fruits of last year’s legislative efforts. Will the victory lap for Governor Hochul continue into February and beyond?

Check back in early March once the reports are revealed to find out if NY sports betting revenue suffers from a February hangover.