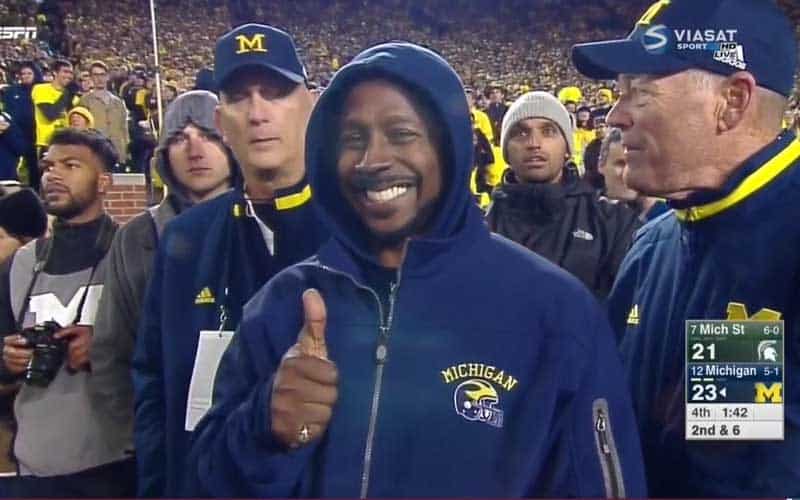 Never celebrate before the clock hits zero—especially in The Big House.

And even though Michigan sports betting may have the lead, the bills in their current form face longshot odds of becoming law.

The Michigan House of Representatives voted 63-45 on Wednesday, passing the Lawful Sports Betting Act—HB 4916—and a number of online gambling bills with bipartisan support.

After the legislature passed the first hurdle this week, bill sponsor Rep. Brandt Iden said he believes his proposal for legal sports betting will allow Michigan to compete with other states for tax revenue and protect consumers.

“We are making great progress on this plan to move sports betting and gaming into a safer, regulated, and modern environment – but we are falling behind other states, and we must move forward,” Iden said in a statement. “The longer we delay, the longer we put our citizens at risk, and the longer we miss out on economic benefits and needed revenue for schools and public services.”

It only took one day for a floor vote to be called after the 10-bill package advanced out of the House Ways and Means Committee by a 10-1 vote on Tuesday.

The legislation now heads to the Senate, but Michigan sports betting hopefuls should be more concerned about a likely veto from Gov. Gretchen Whitmer.

And some members of the House, such as Rep. Rebekah Warren, voted no because the bill package does not have support from the governor and will face longshot odds of becoming law if it reaches her desk in its current form.

“Nobody on our side of the aisle wants this package to be right more than me, I guarantee you,” Warren said on Wednesday. “We still don’t have the bills in a form that will survive our governor’s veto pen.”

The current version of the Michigan sports betting and online gambling bills include the following details:

In recent months, the governor has stated she would support a bill that includes a 15% on sportsbook operators and a $1 million licensing fee. Part of her concerns come from a Michigan State Budget Office report that said the Iden’s bills could cost public education an estimated $28 million annually.

After attempting to negotiate with the governor, Iden chose to raise the tax rates even though Whitmer reportedly never agreed to meet with the bill sponsor.

Iden also disputed Whitmers and the budget offices’ claims and said he estimates between $80 million and $100 million in new tax revenue could be generated if his proposal passes.

“The tax rate went north. We got her more than half of what she asked for on both,” Iden said. “The money was directed to the school aid fund. My directive, from what I had always heard, was ‘protect the school aid fund.’ I believe that these bills did that. So it’s very confusing to me when the governor says they’re not in support.”

With the legislation now in the Senate, members in the upper chamber have until the end of 2019 to send the sports betting bill—or the entire iGaming package—to the governor’s desk.

Michigan was in this exact same position this time last year when then-Gov. Rick Snyder vetoed a similar package on his last day in office, and residents are fully aware that this week’s good news is no cause for celebration.