James vs. Emma Part II: The Jeopardy! Rematch of the Century 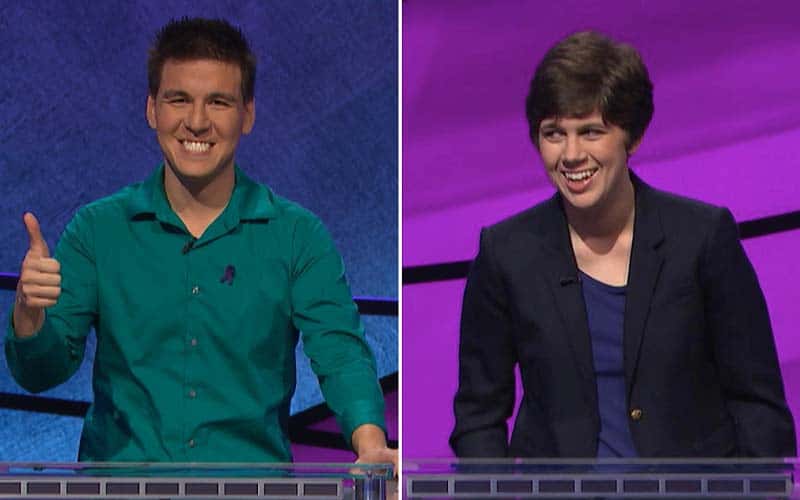 It’s the Jeopardy! matchup we’ve all been hoping for.

What is James Holzhauer versus Emma Boettcher in The Jeopardy! Rematch of the Century?

Both contestants advanced to the final round of the trivia show’s Tournament of Champions, and we’ll find out at week’s end whether Jeopardy James gets his revenge or if Emma the Giant Killer crushes his dreams once again.

The combination of starting at the bottom of the board—which has more difficult questions for higher payouts—then going all-in after eventually finding a Daily Double was something no one, not even long-time show host Alex Trebek, had ever seen before.

And Holzhauer wasn’t just winning; he was dominating like no one had done before him, shattering all-time single-show records while showing no signs of slowing down.

To put in perspective just how dominant Holzhauer was: $77,000 was the previous all-time record for Jeopardy! single-show winnings. He crushed that record with his $110,914 in just his 4th consecutive win and then would eventually surpass that record with a $131,127 performance—nearly twice as much as any contestant had ever won in one airing.

As Holzhauer kept winning, the possibility of breaking two all-time records set by legendary Jeopardy! champion Ken Jennings back in 2004—the $2,520,700 total amount won and the 74-game winning streak—suddenly seemed within reach.

But then Chicago librarian Emma Boettcher came onto the show.

Boettcher shattered Holzhauer’s hopes at Jeopardy! immortality when the show aired in June, ending his 32-game winning streak that had accumulated $2,464,216 over the course of 33 games.

Holzhauer had also trained himself to be quick on the buzzer, but during the matchup against who Trebek would later name “The Giant Killer,” Boettcher beat the bettor on the buzzer throughout their first meeting.

“I was a little shook during Double Jeopardy,” Holzhauer told ESPN after the loss. “I was playing from behind and constantly getting beaten on the buzzer by Emma.”

She would go on to win three more games before falling in the fourth. However, she would qualify for the Tournament of Champions—setting up a potential rematch in what some are now calling “The Super Bowl of Trivia.”

Gambler James certainly doesn’t see the big deal, but Jeopardy James knows that the stakes this time around couldn’t be higher.

Gambler James: “revenge game” narratives are overblown
Jeopardy James: MY PAST SELF MUST BE AVENGEDhttps://t.co/HK7qxut79a

It’s important to remember that there is a wild card to all of the hype surrounding the rematch: High school physics teacher Francois Barcomb, who’s only the second winner of the Teachers Tournament to make it to the final round of the Tournament of Champions.

And as Holzhauer points out, both he and Boettcher have lost a game of Jeopardy! before while Barcomb has not.

While the shippers celebrate getting their Emma-James OTP, Francois calmly dominates his match and claims pole position for the finals. And unlike me and Emma, he’s never lost a game of @Jeopardy.

Tune in tomorrow, should be a good one.

The two-part finale airs Thursday and Friday in either the afternoon or evening depending on where you live, and with a grand prize of $250,000 up for grabs, all bets are off on who will come out on top.

And while the online sportsbooks do not have any betting lines posted for the Jeopardy! Tournament of Champions final round, we’ll attempt to fill the role of the oddsmakers for the historic event.

We predict that Holzhauer would be a heavy favorite heading into the matchup due to his past success and because the finale is split into two parts, meaning he can take even more risks from more opportunities.

Because Boettcher pulled off the upset, we’ll list her next and then Barcomb as a bit of a longshot since he’s the relative unknown variable that may have the most value if it was a real prop bet.

Best of luck to the three finalists, and may the odds be in your favor.

P.S. On behalf of all the sports bettors out there: Don’t screw this up, James!