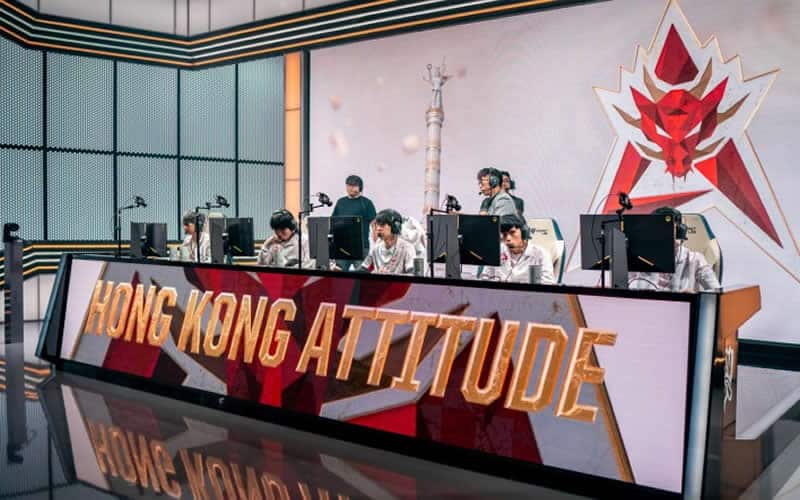 Some things in life are more important than money or games.

For the protesters in Hong Kong, life means “Five demands, not one less.”

The Hong Kong protests began in June when a controversial bill was proposed that would have allowed the extradition of residents to several different countries—but most notably: China.

Since then, millions of Hong Kong protesters have demonstrated in the street, shut down the Hong Kong International Airport, and have issued demands for democracy.

The protests reach much further than East Asia, however. The NBA, Apple, and Google have all bowed down to their new overloads: The Chinese Government.

But perhaps no act was as shameless as what Blizzard Entertainment did recently (more on that in a bit).

Riot Games, which is owned by the Chinese megacorporation Tencent, recently kicked off the 2019 League of Legends World Championship, and it appears they are also actively censoring free speech.

Nevertheless, esports betting odds have been released on whether support is shown during LoL World 2019 for the protest in Hong Kong.

Unfortunately, the odds are not in freedom’s favor.

From the esports specials at BetOnline

The first Hong Kong-centric prop bet involves the team Hong Kong Attitude. Qualifying for the Worlds out of the LMS league that includes Hong Kong, Taiwan, and Macao, HKA is the only team based out of Hong Kong that made it to the main event.

According to LoL communications lead Ryan Rigney, the use of the abbreviations is coincidental.

An official statement to correct some confusion about how we talk about Hong Kong Attitude on our esports broadcasts: pic.twitter.com/ZRqhN7VenK

Today, however, Riot Games officially announced they were forbidding any LoL players and on-air commentators from discussing anything political during broadcasts.

Because of this, the oddsmakers believe that the Hong Kong Attitude will not make a statement supporting their home country at -500 odds.

Will HKA make a statement in support of Hong Kong?

The next prop bet projects that no players will make any kind of statement supporting Hong Kong, either.

At -300 odds of “No,” it’s possible players are weary that Riot Games will do something similar to what Blizzard did to one of its esports players recently.

Chung “Blitzchung” Ng Wai was banned for 12 months by Blizzard after voicing his support for Hong Kong in an interview following his Hearthstone tournament victory. Here’s a clip of what happened:

Blitzchung was also required to forfeit his prize money due to Blizzard’s anger of the situation. As the prize money for the LoL Worlds would be millions, many players may fear they might lose their winnings.

"We are very angered and disappointed at what happened at the event and do not condone it in any way. We also highly object the spreading of personal political beliefs in this manner…We will always respect and defend the pride of our country."

Will any player make a statement in support of Hong Kong?

The final prop favors that no statement will be made supporting China in the ordeal at -800 odds. Three Chinese teams from the LPL qualified for the tournament: FunPlus Phoenix—the odds-on favorite to win LoL Worlds 2019—Royal Never Give Up, and Invictus Gaming, who lifted the Summoner’s Cup last year.

Will any statement be made in support of China regarding Hong Kong?

While the odds favor that no LoL player will voice an opinion regarding the current China-Hong Kong conflict, another American organization has launched a full-blown media attack on China’s oppressive censorship efforts.

Comedy Central’s South Park recently released the episode titled “Band in China” which blasted companies for choosing profits over morals, with Stan Marsh saying near the end of the episode: “Anybody who would betray their ideals just to make money in China isn’t worth a lick of spit.”

In their most recent episode “Shots”—their 300th overall—the words of Towelie sum up everything quite well, and if you have a shred of integrity, then all you have to say is: