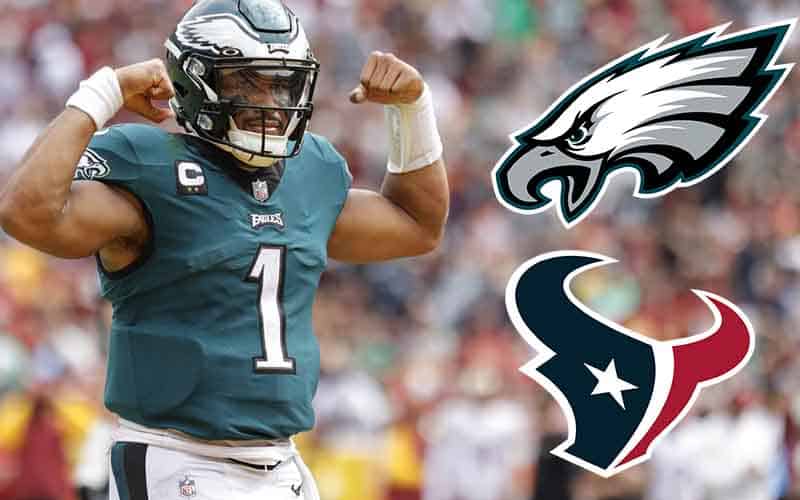 Thursday Night Football betting returns this week with a matchup of a Super Bowl LVII favorite and a bottom dweller in the AFC.

14 point spreads are uncommon in professional football, especially for a prime-time game on national television. However, when the NFL schedule makers drew this one up, it was likely considered a more competitive contest.

Flash forward to Week 8 of the 2022-2023 NFL Season, and the Eagles are sporting an unblemished 7-0 record. They are sitting atop the standings of the NFC East and are the only undefeated team remaining in the league.

Philadelphia is also the top odds-getter in the NFC for betting on Super Bowl LVII, but are currently ranked behind the Buffalo Bills to win it all.

Much of Philadelphia’s success can be attributed to the continued development of starting quarterback Jalen Hurts. His combination of passing and running has kept opposing defenses guessing all season long.

The Houston Texans are in the middle of a rebuilding process following the exodus of Deshaun Watson, their troubled quarterback that was shipped off in a trade to the Cleveland Browns during the offseason.

Houston holds a record of 1-5-1 and is in the cellar of the AFC South Division.

The Detroit Lions and the Texans are currently in a race to the bottom, with the first overall pick of the 2023 NFL Draft going to the franchise that finishes last.

Current odds for betting on the NFL Draft suggest that the top pick will be Ohio State Quarterback CJ Stroud, who is also leading NCAAF prop bets to win the 2022-23 Heisman Trophy.

Odds For First Overall Pick Of The 2023 NFL Draft

Coming in second in the above NFL Draft odds is Alabama QB Bryce Young. Either Young or Stroud would be great picks for both the Lions and Texans and would represent solid foundations upon which they can build their futures.

If you’re in the Philadelphia or Houston area, be sure to check your local television guide to ensure that the game will be on the air. The reason? The World Series is also occurring at the same time as Thursday Night Football’s broadcast, which is bumping the NFL off the air in certain markets.