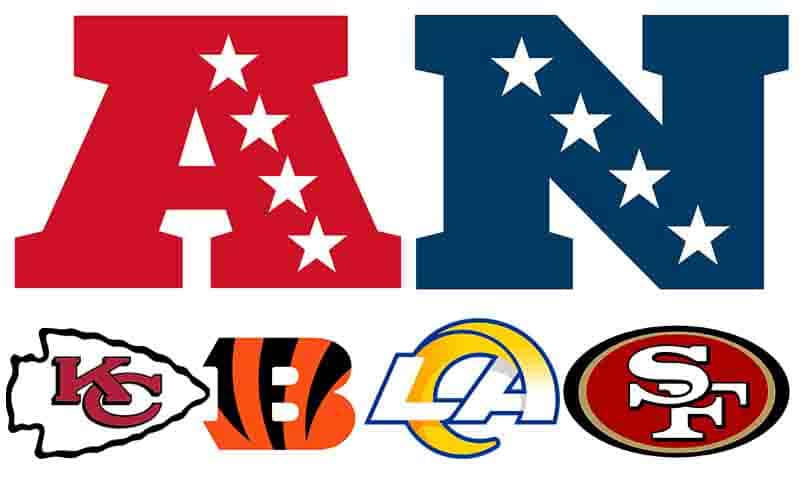 Regardless of who you root for in the National Football League, chances are you can at least enjoy this weekend’s AFC and NFC Conference Championship Games based on one fact – Tom Brady has been eliminated from the NFL Playoffs.

10 out of the last 11 Conference Championship Weekends have featured Brady as a member of the New England Patriots or the Tampa Bay Buccaneers, so no matter how you feel about the Los Angeles Rams, they deserve a standing slow clap for ousting Tom Terrific and the reigning Super Bowl Champions.

Betting on the NFL Playoffs wraps up this Sunday and sends two teams to Super Bowl 56. Here’s our take on each team’s chances.

Once SB LV ended last February, futures odds for betting on the Kansas City Chiefs were produced that predicted them to win Super Bowl 56. The Chiefs struggled early in 2021-22 and relinquished the pole position in the Super Bowl LVI odds. Most recently, that #1 distinction belonged to the Green Bay Packers.

Kansas City is back on top and expected to breeze past the Cincinnati Bengals on their way to Super Bowl 56 on Sunday, but don’t forget about that Week 17 loss that Cincy hung on KC at their house.

Most NFL analysts would agree that the Cincinnati Bengals’ young core offensive players should excite their fans and give them hope for future success.

For gamblers that believe the Bengals’ rise to glory begins this weekend, bets of $1 will net $2.75 if they can beat the Chiefs and win the Lamar Hunt Trophy and a trip to SB 56. Odds will place them as an underdog in the Super Bowl, regardless of which NFC team they face, so bet now and earn the highest payout possible.

Another NFL franchise attempting to win a championship ahead of schedule is the LA Rams. They’ve been one of the winningest teams in the league since head coach Sean McVay came on board, but they’ve yet to win a Lombardi despite coming close in the past.

The Rams are favored to win against the 49ers in the NFC Conference Championship, but should they be? There are two major factors that make us leery of betting on the LA Rams.

First, they’ve lost to the Forty-Niners twice this season, and the last six times in a row overall. That’s three straight series sweeps, folks. San Francisco seems to own the Rams, and to further illustrate that point, the 49ers are the only team to beat a Sean McVay-coached team after they held a halftime lead.

While the San Francisco 49ers are an underdog for the third week in a row, they are merely separated from LA by 3.5 points which is fairly close to the standard variance granted to a home team.

The problem for the LA Rams is that 49ers fans are rabid and are notoriously filling up opposing stadiums on the road during the 2021-22 NFL Playoffs. The fans in attendance at the Rams vs. 49ers Week 18 matchup at SoFi Stadium seemed to be about even, and that number is expected to swing further in the favor of San Francisco this weekend.

The odds for betting on the San Francisco 49ers have paid out brave gamblers for two weeks in a row, so if you intend on laying some action on them to win Super Bowl LVI, do it now before the moneylines drop closer to even after Sunday.