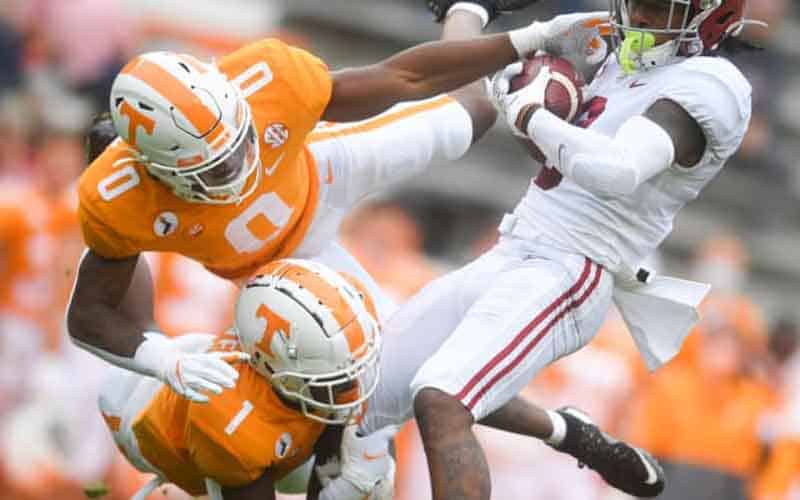 The third-ranked Alabama Crimson Tide face their toughest challenge of the 2022-23 college football season thus far when they visit the Tennessee Volunteers this Saturday at 3:30 PM.

The Volunteers are undefeated and ranked sixth overall in the country and are looking to extend that streak at home against the Tide and make their case for a spot in the SEC Championship Game and the CFP bracket.

Betting lines for the Alabama Tennessee game are consistent in their belief that the Crimson Tide will beat the Volunteers by a touchdown.

Where online college football betting sites differ is in the moneyline odds to win.

The above Alabama Tennessee betting odds are posted in the order of Bovada, BetOnline, MyBookie, and BetUS.

Gamblers that want to bet on Alabama to beat the Volunteers should do so at BetUS because their -265 is the friendliest on the boards at the moment. A wager of $2.65 is required to net $1 on a Crimson Tide victory, which is $0.15 less risk than other top online sportsbooks.

If you believe that the underdog Volunteers will defend their home turf and send Alabama home with a loss, the most profitable moneyline odds are being offered by BetOnline at +235.

A $1 bet on Tennessee to outright win the game this Saturday will result in $2.35 in net profits if it happens.

Combining the over/under with the point spread implies that the final score will be somewhere in the neighborhood of:

Should Alabama bettors be concerned regarding the number of points that Tennessee is projected to score?

One element that has allowed the Crimson Tide to separate from their opponents this season is the play of quarterback Bryce Young, last year’s Heisman Trophy winner.

Young has not been cleared to play this Saturday, but Alabama head coach Nick Saban is optimistic about his chances of starting the game under center for the Crimson Tide.

“Hopefully, we’re going to try to get him ready to play this week… But this is something nobody can predict how quickly he’ll get an opportunity to do what he needs to do.”

Alabama managed to beat a tough Texas A&M Aggies program last weekend by a score of 24-20, but do they have enough talent onboard the roster to outlast the Volunteers on the road without Bryce Young in the lineup?

The current betting lines on the boards have taken Young’s availability into consideration when creating the odds on Saturday’s game. If Bryce gets the clearance to play this weekend, look for the moneylines to shift further in Alabama’s favor.

The odds for CFP betting currently align with the AP Top 25 rankings in that they both feature Alabama as the third-best team in the nation, two statuses that will certainly change if they can beat the Tennessee Volunteers.

The above Alabama Tennessee odds are posted at Bovada, BetOnline, MyBookie, and BetUS