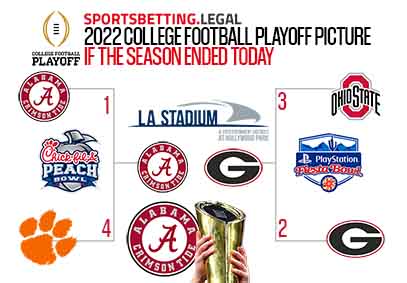 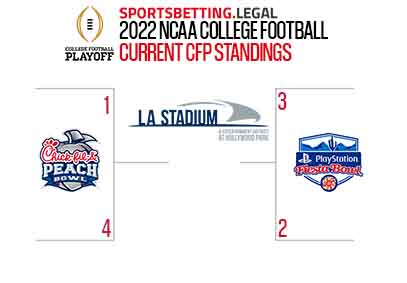 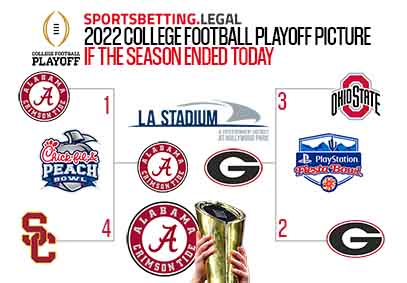 Well before College Football betting has wrapped up for the regular season, CFP futures and potential matchups appear on the boards at online sportsbooks that suggest the top 4 and eventual National Champions.

Comparing the CFP bracket odds for 2022 against the current College Football Playoffs rankings is a great tool for deciding which powerhouse NCAAF program to lay some action on – or not. Once the CFP Playoff picture odds are illustrated, college football betting becomes more clear at legal sports betting sites in the USA. 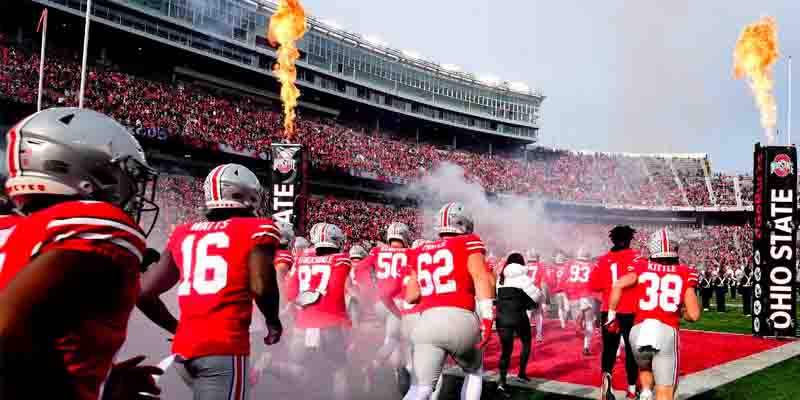 How Are The College Football Playoff Bracket Odds Created?

We use all the CFP odds available across the online sites in our list of sportsbook reviews for NCAAF betting and combine them together to create the College Football Playoff picture odds we feature above.

The overall CFP Champion is determined by combining all of the College Football Futures odds together, but each program’s route to getting there is determined by NCAAF betting lines for each game, conference futures, and even prop bets can provide additional insight.

As the college football futures and betting odds shift, so do the CFP brackets and playoff pictures when they’re updated each week.

During mid-October of each NCAA College Football season, the CFP rankings debut and give fans and bettors an idea of which four programs would be involved in the playoffs if the season ended that day.

Of course, the College Football Playoff ranks will shift between then and early December when the CFP Selection Committee sets the bracket and top 4 seeds.

The top-seeded team will face the #4 ranked team, and #2 will face #3 in the CFP Semifinals which are hosted by New Years’ Six Bowl Game stadiums that rotate each year. The winners of the College Football Playoffs Semifinals move on the CFP National Championship Game to play for the NCAAF Title.

Lines for CFP betting will be available once the final four teams are announced at the end of the regular season, and NCAA College Football futures will be on the boards all year long.

Although any at-large NCAA Football team can qualify for the CFP, winning a Power 5 Conference with an undefeated record is the only sure-fire way to become one of the final four programs competing for a national championship.

Below are the Power 5 Conferences and the college football programs that compete within them each year.

Why Are The CFP Bracket Betting Odds Important?

When college football bettors place a wager on futures odds to make the CFP or bet on the NCAAF National Championship, there is often a lot for the top-rated programs to accomplish before their goals can be realized.

When taking the CFP oddsmakers projections and placing them into a College Football Playoff bracket, betting decisions can be researched based on what path each team has in front of them to travel.

For instance, the #4 team in the CFP rankings at the end of October may feature attractive moneyline odds to win a championship, but what if that means they have to play two SEC schools in a row in order to earn a payout?

Armed with information like that, CFP bettors may think twice before laying any action – or vice versa, decide the time is ripe to place a College Football Playoff bet.

The Chances Of A College Football Playoffs Expansion

While there have been numerous attempts at expanding the CFP field beyond four teams, all efforts have failed. The most recent proposed College Football Bracket included 12 total teams with the top 4 seeds receiving bye weeks.

Never say never, but for now, the College Football Playoff Selection Committee is not inclined to alter the 4-team CFP format. The Committee refreshes its membership often, so perhaps a few election cycles will provide a clearer path for CFP expansion in the future.

Can Two Teams From The Same Conference Qualify For The CFP?