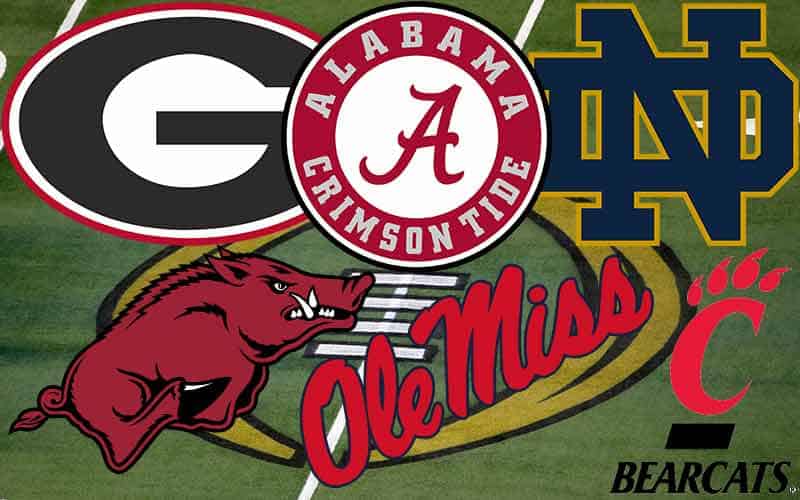 As each weekend passes, another unbeaten NCAAF program or two losses a game. This Saturday will feature three more occasions where something has got to give for three out of six top College Football teams that will take a step back in the AP Top 25 and lessen their overall chances to reach the 2021-22 CFP.

First up at noon eastern is the 8th ranked Arkansas Razorbacks traveling to Sanford Stadium to go head-to-head against the #2 Georgia Bulldogs. Despite both teams entertaining the game without a loss and being positioned in the top ten, the Bulldogs are predicted to win by 18 or more points at home by the top online college football betting sites.

The over/under total and point spread project to a final score of Georgia 34, Arkansas 15.

Scheduled for a 2:30 PM kickoff are the seventh-ranked Cincinnati Bearcats who are visiting Fort Bend, Indiana to try and take down the ninth overall Notre Dame Fighting Irish. In back-to-back weeks, the Irish are not getting love from the NCAAF oddsmakers as they are point spread dogs by 2.5 points to the Bearcats at home.

Last week, the Wisconsin Badgers were projected to win by 4.5 points over Notre Dame, only to have the Fighting Irish lay a 41-13 beatdown on the road. Now that they’re back at Notre Dame Stadium, can the Irish continue their winning ways and hold off the Bearcats?

While NCAAF sportsbooks are leaning toward a Cincinnati win, online CFP betting sites still have Notre Dame ranked two spots ahead of the Bearcats. While that doesn’t indicate a win for ND on Saturday, it does suggest that a loss will not remove the Irish from College Football Playoff contention.

It should come as no surprise that four weeks into the 2021-22 NCAAF season the Alabama Crimson Tide have yet to lose a game and are ranked #1 in the AP Top 25 as well as in the odds for betting on the CFP National Championship.

What could be a revelation to many at this juncture of the season is the fact that the Ole Miss Rebels are undefeated, and because they compete in the SEC, possess a legitimate shot of going all the way in 2021-22.

The Rebels are not expected to reel off a win in Tuscaloosa, as they are a 14.5 point underdog for Saturday’s 3:30 contest. If Mississippi can muster up the moxie required to earn a W against the Crimson Tide, then they’ll shake up the rankings and the CFP projections as well.

The College Football Playoff picture will be much more clear following these three key matchups occurring Saturday afternoon, with the winner of the Cincinnati and Notre Dame game potentially being the only outside threat to the Southeastern Conference win the National Title.