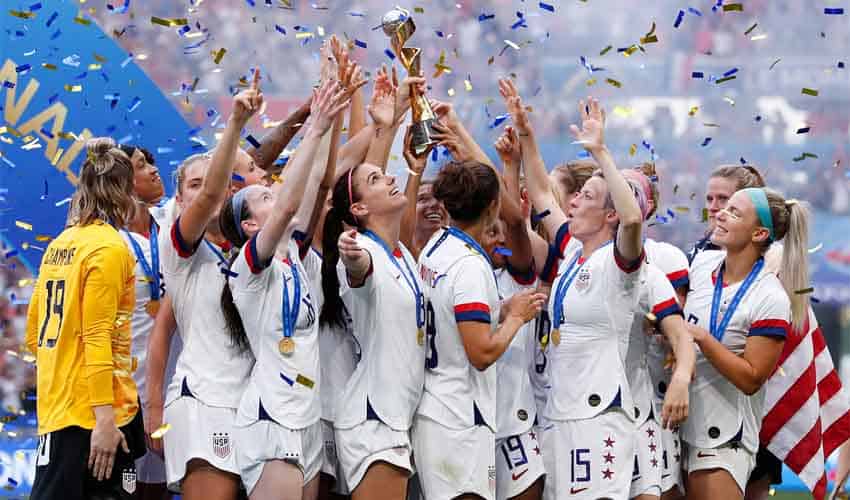 Chalk it up: The United States are World Cup champions!

The US women’s national soccer team were the unanimous odds-on favorite to win 2019 World Cup before the start of the tournament and capped off a historic run by defeating the Netherlands 2-0 in the final on Sunday to capture their second straight title.

Started from the top

Nearly all online sportsbooks opened the USWNT with +300 ($100 bet wins $300) odds before the teams began play in France, which means oddsmakers were giving the US women’s team around a 25% chance to capture the country’s fourth title.

Although the USWNT were the unanimous favorite heading into this year’s tournament, they weren’t as heavily favored as most would believe considering their historical dominance on the world stage.

But it didn’t take long for the defending World Cup champs to show why their the top women’s soccer team on the planet.

Red hot and cooling off

Oddsmakers all around the world quickly reevaluated the USWNT’s chances after the team came out of the gate firing on all cylinders in their record-breaking 13-0 victory against Thailand.

Most sportsbooks relisted the US women’s chances between +200 and +250 odds, which gave them roughly a 31% chance of winning back-to-back titles.

After the statement game by the US women’s soccer team, they would defeat Chile 3-0 and Sweden 2-0 to close out the group phase.

But things got much tighter in the knockout phase, which saw the USWNT pull off three straight “too close for comfort” 2-1 victories over Spain, France, and England.

The USWNT was favored in all three matchups, but nothing would come easily and in the end, the team would earn a trip to their fifth appearance in the World Cup Final.

USA vs. the field

However, both France and Germany would lose in the quarterfinals. The USWNT defeated France 2-1 and Sweden — who beat England 2-1 on Saturday in the third-place match — knocked out Germany with a 2-1 victory.

The eventual second-place Netherlands team opened the tournament among the top five favorites at +1200 (7.69%) odds, which turned out to be a decent value for bettors looking to hedge against the favored USA.

Betting on the Dutch turns a profit

Although, there was only value available if you bet on the USA to win in full-time with the Netherlands winning outright and a tie after 90 minutes also on the betting line.

I bet on the USWNT’s -227 odds to win outright in 90 minutes at BetOnline, so if you had bet $100 (to win $1200) on the Netherlands to win the World Cup and then hedged with the odds I shopped for, then you would have gained a nearly $300 return on investment.

But the hedge value significantly diminished on the “Who will lift the World Cup?” money line — which is strictly on which team will win — since the USWNT were heavily favored against the Netherlands in the final.

How much of favorite was the USWNT in the final? Well, the US women’s team was listed at -600 odds and the Netherlands had been given +425 odds to win.

Hedging a pre-tournament $100 bet on the Dutch women’s team would have only netted you an $86.03 profit after picking the USA in the final at -600 odds.

And after squeezing the juice out of the 2019 World Cup Final money line, we can see that oddsmakers were giving the USWNT approximately an 83.40% true implied probability of winning it all while the Netherlands had a true chance of 16.60% to pull off the upset.

The USWNT win their 4th title

Even though the Americans were heavily favored to win against the Dutch, the match got off to a slow start, and it looked like a possible upset could be brewing

Scoring early in matchups had been the USWNT’s forte all tournament, but with the game tied 0-0 going into halftime, the Netherlands’ “bend don’t break” game plan was causing trouble for the USA offense.

Unfortunately for the Dutch, their conservative playstyle would only net them with one shot on goal and a goose egg on the scoreboard.

The levy would finally break for the Netherlands in the 61st minute after Alex Morgan was fouled inside the box.

Team captain Megan Rapinoe — who would go on to win the Golden Ball (top player) and the Golden Boot (top scorer) — buried the penalty kick to give the US a 1-0 lead.

And only a few minutes after, in the 69th minute, Rose Lavelle would essentially sign, seal, and deliver the deal with a goal of her own, and the USWNT’s defense would smother the Netherlands to close out the 2-0 victory the 2019 Women’s World Cup Final.

It’s impossible to know exactly who will be playing for any of the women’s national soccer teams four years from now.

With the best infrastructure and funding out of any team in the women’s game, it’d be hard to imagine the USWNT not opening as the odds-on favorite again in 2023.

The United States has won half of the Women’s World Cup tournaments, so — based on history alone — they should have a 50% chance against the field.

But when you factor in the countless girls and young women watching yesterday’s match and the entire tournament who were inspired to pick up a soccer ball with dreams playing for the United States — or any of the competing nations — in four years and beyond, then the odds, chances, and probabilities take a backseat for the moment.

Because until 2023, anything is possible.