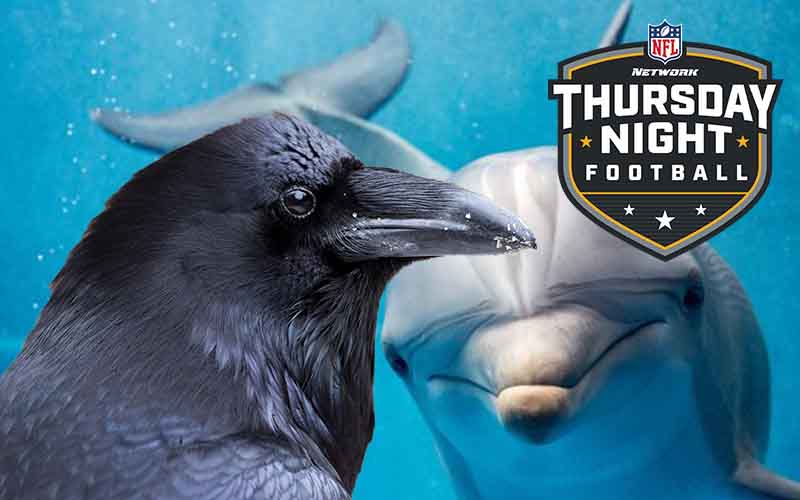 Thursday Night Football kicks off this evening at Hard Rock Stadium in Miami Gardens, Florida as two teams that are historically mismatched have been paired up for a national viewing audience to endure.

The Ravens are favored to win by at least a touchdown in the above NFL point spread, which would seem to be a safe cover for Baltimore given their head-to-head record when matching up with the Miami Dolphins historically.

Although the all-time Ravens vs. Dolphins series stands at 10-6 in favor of Baltimore, Miami has only managed to win once out of the last nine times they’ve faced each other.

Dolphins vs. Ravens Series History Since 2008

As is evidenced by the above series history dating back 14 years, the Miami Dolphins do not belong on the same playing field as the Baltimore Ravens, yet NFL betting sites are suggesting that it’ll be a reasonably close contest. Why?

The Ravens would be the #2 seed in the AFC in the season ended today. The NFL Playoff picture odds brackets suggest that they’ve got what it takes to make it to at least the Conference Championship Game in the AFC.

Current NFL futures odds imply that the Ravens will lose to the Buffalo Bills in the AFC Championship Game and fall just short of qualifying for Super Bowl 56. However, the Bills are tanking as of late, and if the Ravens played Buffalo today, they’d likely be favored.

Moving on to the Dolphins, they are struggling to win games whether quarterback Tua Tagovailoa is in the lineup or not. Many were optimistic about Miami’s potential this season with a healthy Tua under center, but the wheels fell off when they dropped a game to the Jacksonville Jaguars in Week 6.

What’s unfortunate is that the Dolphins bloated 10-6 record from 2020 may be the reason head coach Brian Flores loses his gig this year as their follow-up effort reveals that last year’s win total was an aberration, albeit a well-earned one.

Flores does not deserve to be fired. He’s instilled a system of accountability in Miami and appears to be the only Bill Belichick assistant that mirrors his efforts. Unfortunately, that’s the nature of the NFL these days, and three years was the window of opportunity that was granted to Flores’ predecessor in Miami, Adam Gase.

It outlook is grim for coach Flores, especially if they get trounced tonight on national television by the superior Baltimore Ravens. Tune in tonight on the NFL Network or FOX at 8:15 Eastern to see if Miami can surprise us all and make a game of it.