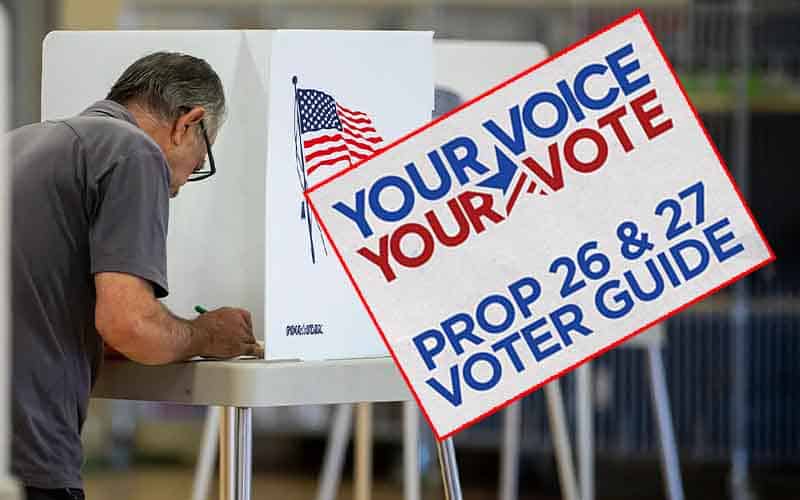 The citizens of the state of California will vote on two sports betting propositions on November 8th that, if passed, will regulate domestic sportsbooks in the state for in-person, online, and mobile wagering.

With 31 days remaining on the clock before votes are cast to decide the fate of Proposition 26 and Proposition 27, a recent poll reveals that legal online sportsbooks in California are not a sure bet.

Proposition 26, which would allow for in-person sports betting at CA’s tribal casinos and card rooms, is supported by 31% of polled Californians, while 47% are opposed to its passage.

How about mobile sports betting and online sportsbooks? Surprisingly, Proposition 27 received less approval (27%) and more opposition (53%) than retail sports betting venues in CA, but why?

Perhaps California voters should be more sympathetic toward online and mobile sportsbooks because of the enormous amount of revenue that is taken in when compared to in-person locations.

Then consider that CA is the most populated state in the USA. The following states rank first through seventh in total population, and the top three have yet to regulate domestic sports betting.

We don’t care to indulge in fuzzy math here at SBL, but with California’s population nearly twice that of New York State, it can be assumed that the monthly revenue collections could average in the neighborhood of $200 million per month if online and mobile sports betting get the go-head by Proposition 27’s passage.

With CA desperate for additional tax dollars to support its numerous infrastructure issues, there would have to be a very good reason that voters are opposed to local sportsbooks when other states around the country have welcomed them with open arms.

Perhaps the sports betting revenue reports from around the country aren’t enough to sway CA constituents.

Many that participated in the poll expressed frustration at the advertisements seeking support for both Propositions. Some are angered by the sheer volume of everpresent ads, while others are simply confused by the two competing Propositions and are not compelled to dig deeper and find out what’s at stake.

To add to the confusion, tribal backers of Proposition 26 are almost unilaterally opposed to 27, and there are accompanying adverts that express this opposition.

A major indicator of California voters and their newfound lack of support for domestic sports betting is a UC Berkeley poll taken last February that revealed a more optimistic outlook.

8 months ago, 45% were in favor of making CA a sports betting-friendly state, with only 22% against the idea. Now, with less than a month before votes will be cast, domestic sports betting in California seems poised for failure, at least via these constitutional amendments.

For now, placing a legal bet on sports in the Golden State will require becoming a member of an offshore sportsbook site. While there are probably thousands of online sportsbooks that serve the region, we suggest only placing bets with the offshore sports betting sites that we review favorably here for the safest experience.