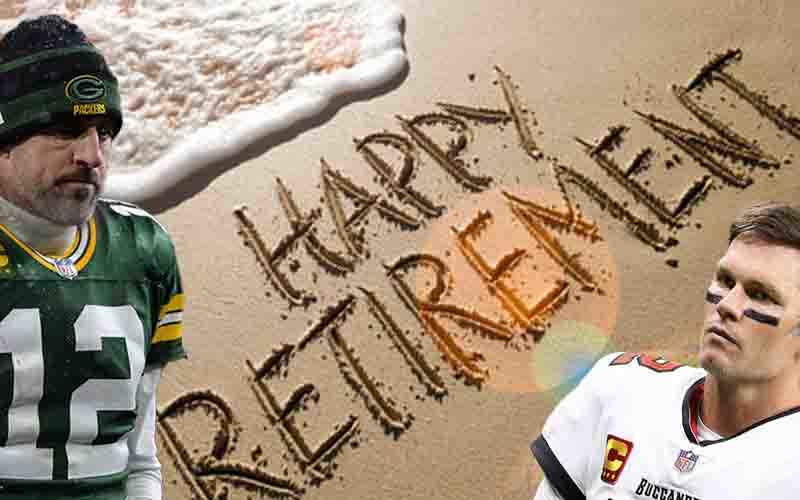 Everyone outside of network executives, casual pro football fans, and residents of the Tampa Bay region should be ecstatic that Tom Brady and the Buccaneers have been eliminated from the NFL Playoffs.

Due to his advanced age of 44 years old, NFL prop bets are now on the boards asking gamblers to wager on whether or not he’ll call it a career after 22 seasons.

Sure, many would suggest that he has nothing left to play for, but they do not possess the competitive spirit that keeps Brady coming back for more, taking a crack at an eighth Lombardi Trophy and putting his championship totals out of reach.

Here’s what online NFL sportsbooks have to say about the odds of Tom Brady retiring.

According to the following line for betting on a Brady retirement, the odds suggest a very high probability that next season will be his last as an NFL player.

The -400 moneyline for Brady retiring after next season intrinsically converts to an 80% chance of occurring and will require a wager of $4 just to net a payout of one dollar.

Tampa Bay fans can breathe a sigh of relief if they buy into the following betting line, as it implies a high degree of certainty that Tom Brady will be the Week 1 starter for the Buccaneers next season.

If the above prop proves accurate, then the odds for betting on the Buccaneers to win Super Bowl LVII will likely place them among the top handful of teams as Brady makes what would potentially be his last run for championship glory.

The same cannot be said for Green Bay Packers quarterback Aaron Rodgers following his early exit from the 2021-22 NFL Playoffs in last weekend’s Divisional Round.

Aaron Rodgers Odds For Next Team And Retirement

While it appears that there is only a microscopic chance that Rodgers retires before Week 1 of next year, there is a solid shot that he will be playing for a new team when the pads start popping in early September.

Will Aaron Rodgers Retire Before The 2022-23 Season?

Will Aaron Rodgers Be Week 1 Starter For Green Bay Packers In 2022-23?

There’s a 72% implied probability of Aaron Rodgers starting for another team next year, but what franchise is most likely to secure his services?

Two variables would be required for an appropriate landing spot – the team would need to possess a QB of less talent than Rogers, and must also have a roster made up of proven winners. Think Tampa Bay prior to Brady’s arrival.

The following betting odds for Aaron Rodgers’ next team suggest that the Denver Broncos could provide his most logical landing spot.

Odds for betting on the Green Bay Packers are not available in the above prop, but based on the line posted earlier, Rodgers remaining in Wisconsin is not out of the question.