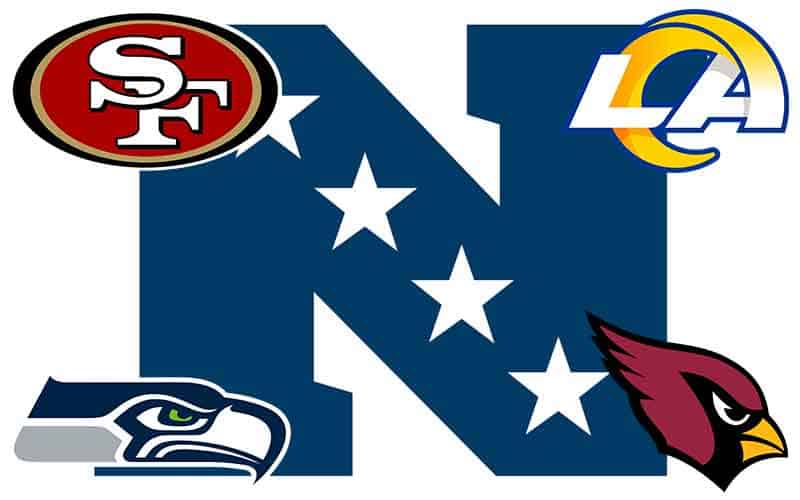 The NFC West Division is arguably the best in pro football. Since the debut of the 14-team NFL Playoff format, prognosticators have been forecasting the potential for a single division to place all of their teams into the postseason, with the most likely candidate often being the NFC West.

There is no question regarding the quality of each NFC West franchise, save for the Seattle Seahawks, who lost their long-time starting QB, Russell Wilson, to the Denver Broncos. NFL betting sites are consistent in who they believe will finish atop the division in 2022-23 but still offer profitable moneylines on all teams involved.

The NFL futures odds for each NFC West franchise are listed next to their names in the following order – Bovada | BetOnline | MyBookie | BetUS.

The LA Rams won Super Bowl LVI and are now positioned in the betting odds to win the NFC West in 2022-23. Betting on the Los Angeles Rams and their futures odds will still reward more profit than the amount wagered despite their favored status in the division.

LA lost WR Odell Beckham, Jr., and edge rusher Von Miller in the offseason but replaced them with Allen Robinson and Khalil Mack, respectively. This reloaded Rams team has a great shot at not only winning the NFC West but repeating as Super Bowl Champions.

The best odds on the board for the Rams to win the division are currently posted at BetOnline (+130).

The 49ers won the NFC West last season but fell to the Rams in the NFC Championship Game. QB Trey Lance is the only real question mark heading into the 2022-23 season, as he is untested entering his second year in the league.

The team appears poised to trade former starting quarterback Jimmy Garoppolo despite the level of success he has achieved when healthy. Coach Shannahan is no fool. If he is willing to part with Jimmy G, then it means Lance is ready to make his mark on the league.

The best odds for betting on the San Francisco 49ers are being offered by BetOnline, with a +170 moneyline that will deliver $1.70 in profit for each dollar wagered.

The star-studded Cardinals will once again compete for the NFC West title and are ranked third in the preseason divisional futures odds. Bovada is where you should place your Cardinals bets because their +400 moneyline will payout more than any other online sportsbook that we recommend here at SBL.

Kyler Murray and DeAndre Hopkins are a lethal offensive combination that keeps defensive coordinators and cornerbacks up at night. The only question remaining is when will the Cardinals soar above their competition and finally achieve championship glory?

The Seahawks are projected to finish at the bottom of the division which should come as no surprise when considering the departure of their long-time QB, Russell Wilson. Head coach Pete Carroll will attempt to rebuild the Seahawks into a winner, but is it too late for such an attempt?

At 70 years of age, Carroll is the oldest head coach in the NFL However, if anyone deserves a chance to do it, it’s him. Seattle will enter the 2022-23 season with Geno Smith at quarterback, which should tell you all you need to know about their chances of winning the division.

Despite the Buffalo Bills and Tampa Bay Buccaneers holding the most likely odds to make it to Super Bowl LVII, the following NFL prop bet suggests that the AFC West or the NFC West are the two most likely divisions to produce an NFL champion.

The rationale is likely due to the presence of multiple championship-caliber franchises in each division, making them the two best groupings in the game today. Gamblers have the chance to at least triple their money by selecting the correct Super Bowl-winning division this year.