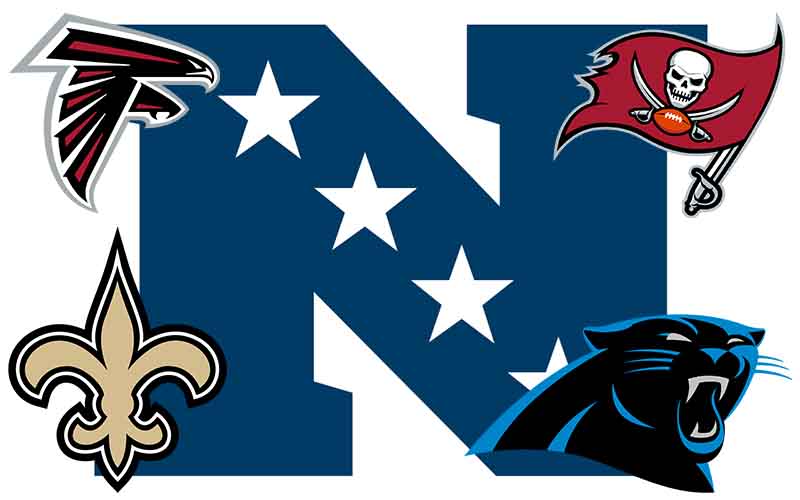 The NFC South Division features a Super Bowl LVII favorite and a legitimate Wild Card contender. but variances in the betting odds between our top books are worth exploring before laying any action on NFL futures for 2022-23.

The moneyline odds for each team are presented in the order of Bovada, BetOnline, MyBookie, and BetUS.

Tom Brady has unretired, and his presence in the Buccaneers lineup has not gone unnoticed by NFL oddsmakers. Futures for betting on the Tampa Bay Buccaneers suggest that they will easily capture the NFC South title in 2022-23, and they are also favored to win the NFC and represent the conference in Super Bowl 57.

The Bucs lost TE Rob Gronkowski to retirement, but they recently acquired WR Julio Jones who could produce significant numbers if called upon. At Brady’s age, there has to be a year where a declination in skills sets in, and no one wants to be on the wrong side of that betting equation when it happens.

Still, TB seems like a safe bet to win the division this year. The moneyline that will deliver the most profit per dollar risked is currently held at Bovada (-250).

Our official NFC South sleeper pick for 2022-23 is the New Orleans Saints. Quarterback Jameis Winston is certain to post solid numbers this season with the return of WR Michael Thomas as well as the signing of Jarvis Landry. Alvin Kamara is a bit of a question mark entering the year as he is facing a potential suspension, but that may not be imposed until next season.

MyBookie has posted a moneyline of +350 for the Saints winning the NFC South in 2022-23, which is currently the highest on the boards and will pay out at $4.50 per dollar wagered.

The big “if” entering the season is the health of running back Christian McCaffrey. When he is at 100%, there is no better RB in professional football. All signs point to McCaffrey suiting up for Week 1, but the odds are still long for the Panthers to chase the NFC South crown.

If you feel that the Panthers have a decent shot at winning the division this year, lay your action at BetOnline and their +1100 odds.

Just one look at the depth chart of the Atlanta Falcons and it is easy to see why they are projected to finish fourth in the NFC South. They drafted QB Desmond Ridder out of Cincinnati but appear poised to enter the season with journeyman Marcus Mariotta under center.

Expect TE Kyle Pitts to suffer a sophomore slump in the statistical department due to the overall recession, but the addition of first-round WR Drake London out of USC has the potential to open up passing lanes for the budding duo.

If the Falcons sneak up and win the NFC South, the best NFL moneyline odds for them to do so are present at Bovada.