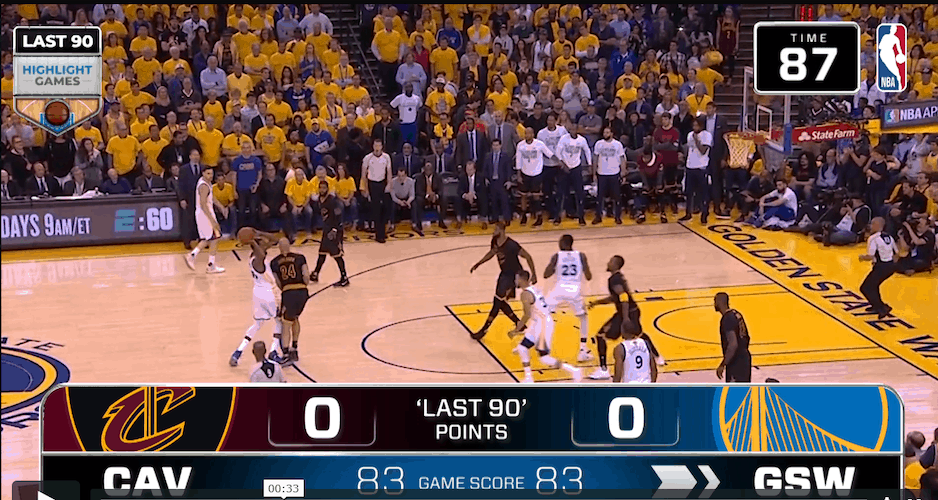 The NBA and the league’s players union announced a partnership with UK-based gaming provider Highlight Games to launch the virtual sports betting game NBA Last 90, which will allow people to bet real money on simulated matchups that use real NBA highlights and footage.

NBA Last 90 is scheduled to debut during the 2019-20 NBA season at licensed land-based, online, and mobile operators in the legalized US and European sports betting and lottery markets, according to the league’s press release.

The virtual wagering game is powered by a random number generator that simulates the last 90 seconds of an NBA matchup, and gives users the opportunity to bet in several ways, including who will win, who will score on the first possession, and the over/under for total number of points scored by both teams.

The RNG-based game will randomly pull archived highlights and footage of NBA matchups from recent seasons, which the league said will produce “millions of possible outcomes.”

Placing bets on simulated events in a virtual world is nothing new. Historical horse race betting has been around for decades, and even Lil Wayne and Birdman used to bet each other $10K on simulated matchups in the Madden NFL video game.

However, with today’s announcement, the NBA becomes the first major professional sports league in the United States to offer any form of sports betting to fans directly. The federal ban on sports betting was lifted by the Supreme Court last year.

Additionally, this new product gives basketball fans and bettors an accessible way to wager on NBA action during the season as well as the offseason — even if the outcomes exist only in a simulated reality.

Highlight Games has offered its soccer version of virtual sports betting to fans in the European market for the past couple years with great success.

You can check out a demo of the soccer version or the upcoming NBA Last 90 by visiting their official site.

And hey, you have to admit that this is all great news for Pelicans fans because they’ll be able to keep Anthony Davis in New Orleans forever in this NBA sports betting matrix.

From the NBA press release:

“We are extremely excited about this partnership and the potential future opportunities for our players in the virtual gaming space,” said Josh Goodstadt, Executive Vice President of Licensing for THINK450, the commercial arm of the NBPA. “We look forward to working with the NBA and Highlight Games to create a unique gaming experience that will help to grow the popularity of the players and the league worldwide.”

“I’m delighted to announce this groundbreaking partnership with NBA and NBPA,” said Tim Green, CEO Highlight Games.  “Highlight Games has an ambitious strategy to enter the nascent US sports betting and virtual sports market, and this collaboration is the first important step on that journey. NBA Last 90 features real NBA stars and real NBA highlights, differentiating it from any other virtual sports product on the market.  We’re confident that players around the world will be instantly engaged with NBA Last 90.”