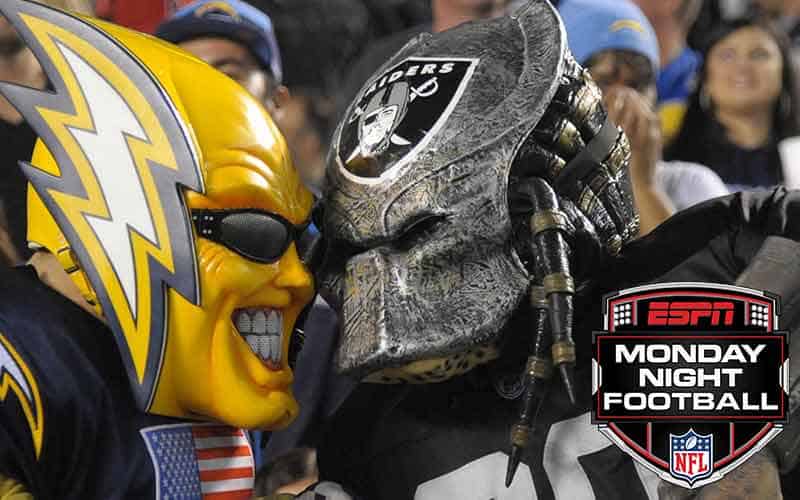 Don’t look now, but the Las Vegas Raiders and the Arizona Cardinals are the only two undefeated teams remaining in the NFL prior to the completion of the fourth week of play.

Justin Herbert will have his chance to shine tonight on prime-time television as the second-year quarterback hopes to defend the Chargers’ home turf against the 3-0 Raiders.

The Raiders have surprised many thus far in the 2021-22 NFL season, and their early success has the remainder of the AFC West trying to keep pace. One of those said western teams is the Los Angeles Chargers who are one game behind Vegas in the standings, and a win tonight can pull them even with the Raiders.

Legal NFL betting sites have posted the following line on tonight’s game that implies a home victory for Justin Herbert at the Chargers, pulling Las Vegas back to the pack and creating a 4-horse race to become the division champion.

One cannot secure a top-four seed in the postseason without earning a division title, much less entertain the idea of earning the top overall seed and a bye week.

The futures odds posted for the AFC West at NFL Playoff betting sites still heavily favor the 2-2 Kansas City Chiefs despite their sluggish start to the season and the current competitive state of the division. Considering the likelihood of a non-KC AFC West winner in 2021-22, the below moneylines for LA, Denver, and Vegas are worth having a look at.

To contrast the above NFL Playoff odds, below are the current standings, rankings that would be altered significantly with a loss by the Raiders tonight in Los Angeles. There is also an opportunity for the Raiders to establish an even greater lead over their division foes if they can overcome the odds deficit and hand the Chargers a loss.

So, what has been the recipe for success in Las Vegas, and can head coach Jon Gruden continue to keep his team performing at such a high level consistently?

Starting QB Derek Carr is playing out of his mind this season, posting the top yardage numbers in the league after three weeks of play. Carr bested the quarterback in second place, Tom Brady, by nearly 150 yards.

It appeared as if the Miami Dolphins may have had the Raiders’ number in Week 3 as the game reached an overtime period after Vegas gave up a touchdown and a two-point conversion in the final seconds of regulation.

The Raiders maintained their poise and outlasted the Dolphins, setting themselves up for an opportunity to remain undefeated, and display their potential to the rest of the NFL on a warm October Monday night for all football fans to witness.

The current odds for betting on the Super Bowl suggest that the Chargers (+2200) are a much more legitimate contender for the Lombardi Trophy than the Raiders (+3500), but a win tonight for Vegas will certainly alter that outlook.