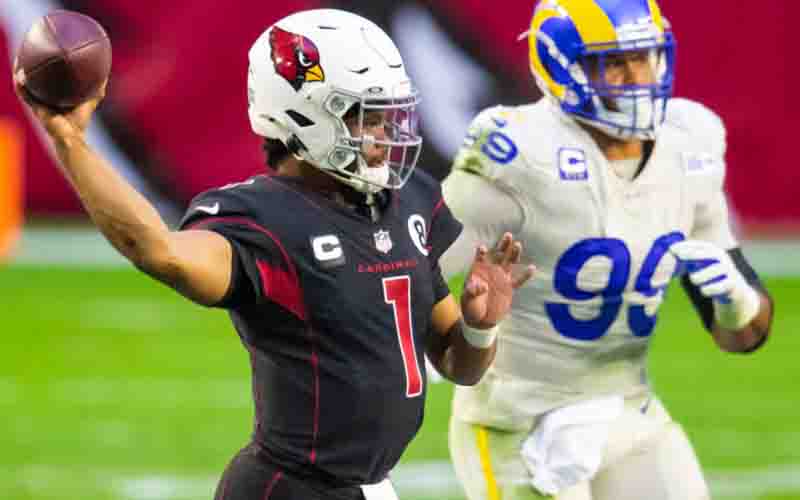 The NFC West Division title is up for grabs when the Arizona Cardinals and the Los Angeles Rams matchup for the second time this season on this evening’s edition of Monday Night Football on ESPN.

Back on October 3rd, the Cardinals walloped the Rams by a score of 37-20 in Los Angeles. NFL betting sites are favoring Arizona to repeat their Week 4 performance as they are favored by 2.5 against LA tonight.

The LA Rams were early darlings at Super Bowl betting sites but after 14 weeks of play in the 2021-22 NFL season, oddsmakers have come down to Earth with their postseason expectations for Los Angeles.

Still, the Rams are within striking distance of winning the NFC West, and also have a stranglehold on the 5th seed as a wild card qualifier.

With a win tonight, the Rams would find themselves within one game of the Cardinals for the division lead and could gain the tie-breaker edge if they can put enough points on the scoreboard.

A loss, however, would place Los Angeles in dangerous territory and within a game of the San Francisco 49ers who already beat them in Week 10 by a score of 31-10.

The 49ers and the Rams will face each other again during the final week of the 2021-22 season, and almost assuredly, NFL Playoff seedings will be on the line when that happens.

First things first, however, tonight’s game needs to be settled. NFL point spreads of -2.5 for a home team are fairly standard, but that seems like a small margin for two teams that were separated by 17 points in their prior meeting.

What gives? There’s nothing in the recent history of the Rams that suggests they’ve got what it takes to upset the Cardinals at their nest so consider laying some action on Arizona to cover the -2.5 with ease.

A decisive win tonight by the Cardinals is further suggested by the NFL Playoff odds posted above. A win by LA would place the division title in jeopardy, however, the above futures suggest that Arizona will easily soar on to win the NFC West.

The Cardinals will face the Detroit Lions, Indianapolis Colts, Dallas Cowboys, and the Seattle Seahawks, and a win tonight will afford them a slip-up or two along the way. They’ll likely be favored in all of their remaining contests.

Remaining on the Rams schedule for 2021-22 are the Seahawks, Minnesota Vikings, Baltimore Ravens, and San Francisco, so a loss against Arizona on Monday Night Football has the potential to place them in a tough spot in regard to their postseason chances.

No matter which NFL team you intend to bet on tonight, be sure to secure your wagers prior to kickoff to ensure the highest moneyline odds that offer the best payouts.