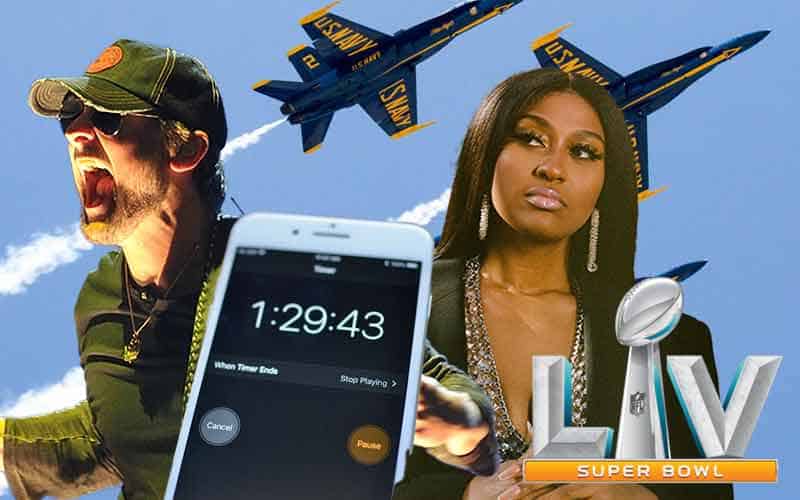 Adding new mythos to the “Florida Man” legend, Orlando journalist, Zach Maskavich, posted a video on Friday that has online sportsbooks scrambling to adjust one of their Super Bowl prop bets for today’s NFL championship matchup.

While Maskavich was in the parking lot of Raymond James Stadium on Friday, he heard some familiar, patriotic sounds coming from the PA system.

Once he realized that it was Eric Church and Jazmine Sullivan practicing their rendition of the Star-Spangled Banner for tonight’s game, instead of standing up and placing his hand on his chest, he grabbed his smartphone and a timer.

Alright gamblers. Here is the timer on the practice of the National Anthem. 2:16 #SuperBowl #GoBucs #ChiefsKingdom pic.twitter.com/CpJC4gHUPp

Maskavich posted a video to his Twitter account that appears to show Church and Sullivan’s Anthem performance coming in at just a hair under two minutes and sixteen seconds.

Now that the video has been posted and has made its way across the Internet, sportsbooks have reacted quickly, adjusting their betting odds for the Super Bowl 55 National Anthem performance or removing them altogether.

Most books had the line set between 1:58 and 2:03. After the flurry of action that came in following Maskavich’s video being posted, the sites that kept the odds on the board quickly bumped up the over-under.

MyBookie Sportsbook has been studying in the film room because they agree with the assessment of our staff that the Banner came in just under 2:16, and have set a new line at precisely at 2:15.15.

Bovada removed the line but still features several National Anthem prop bets on the board regarding player and coach appearances on camera during the performance, including odds on whether the SB LV Star-Spangled Banner will last longer than any scoring drive during the game, be it a touchdown or a field goal.

Another major online book that has removed their duration-based Super Bowl National Anthem prop bets is BetOnline, although they did add a new provocative line that’s sure to attract a wager or two.

Will Jazmine Sullivan Show Cleavage During The National Anthem?

The fine print of this Super Bowl LV betting line provides the parameters for the wager. For this particular bet, Sullivan’s wardrobe must reveal cleavage skin, defined as “a sharp division or split between her breasts.”

We’d love to state that all is fair in sports betting, but there are opportunities for outside elements, or in this case, “savvy” reporters, that can impact the betting odds. There was no crime committed, however, journalistic ethics may be been jettisoned in favor of a few precious clicks on social media.

This is not the first betting controversy surrounding the National Anthem at the Super Bowl, as SB LIII offered a conundrum to oddsmakers around the globe.

Gladys Knight sang the word “brave” several times at the end of the Anthem, and online sportsbooks had to make a decision on the fly to decide when the rendition officially ended.

Some betting sites opted to stop the clock after the first mention of brave concluded, while others took the mulligan and paid out bets on both sides, admitting that’d they’d done a poor job of detailing the parameters of the wager.

One wager that you need to detail right now is your Super Bowl 55 bets for tonight’s game. Once the Super Bowl is in the books, that’ll wrap up any in-play NFL betting until September, so don’t miss your last chance to lay some action on pro football and get your bets in early.