Iowa vs. Penn State Winner Will Have Massive Impact On CFP Betting Odds 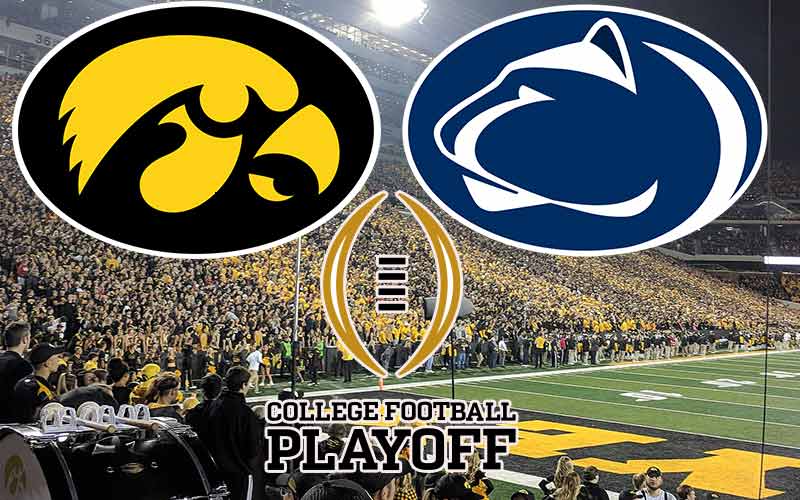 As long as the Alabama Crimson Tide and the University of Georgia Bulldogs enter the SEC Championship Game on December 4th without a blemish on their win-loss record, both programs will qualify for the 2021-22 College Football Playoffs.

That only leaves two slots open for teams outside of the Southeastern Conference to qualify for the CFP, and the winner of this Saturday’s game between Penn State and Iowa will have the opportunity to claim one of college football’s final four spots if they can follow through with a lossless second half of the season.

Kinnick Stadium in Iowa City will be at maximum capacity attendance when Penn State visits town for what will arguably be the biggest college football game to ever take place on the University of Iowa’s campus – at least in the last 60 years.

If Iowa can follow through on the above odds for betting on NCAA College Football and beat Penn State, they will not face any top ten opponents for the remainder of the year.

Penn State still has the Ohio State Buckeyes, Michigan Wolverines, and Michigan State Spartans remaining on their schedule, and when including Iowa in that mix, that’s one hell of a run the Nittany Lions will have to make to reach the playoffs.

The Hawkeyes are ranked third overall, right behind the aforementioned SEC powerhouse programs, and currently have an inside edge on the CFP should they get beyond Penn State.

With that in mind, why do their odds for betting on the CFP rank them so low when they are favored to win on Saturday?

The two above college football betting lines both come from Bovada Sportsbook but seem to suggest different outcomes. One cannot expect the Iowa Hawkeyes to beat Penn State by two but then grant the Nittany Lions a greater chance of winning a national title.

We believe the above futures will shift significantly following this weekend’s results as oddsmakers are hesitant to adjust the line due to the tight point spread margin of 2.

Ohio State still holds the third spot in the odds for betting on the NCAAF National Championship, and that foretells an expectation of the Buckeyes winning out their Big Ten schedule and championship game and marching on to the CFP.

But will there be room for a 1-loss Buckeyes program if Iowa, Cincinnati, and Oklahoma remain undefeated after all regular-season contests are completed? Logic would suggest no, but stranger things have happened in previous CFP rankings.

The postseason picture will become much clearer following this weekend’s key matchups, but we won’t get a true indication of what the College Football Playoff Selection Committee is thinking until their first official rankings of 2021-22 are revealed on November 2nd.

Until then, the NCAAF betting odds and the AP Top 25 rankings will have to suffice. Watch the results play out this Saturday at 4:00 PM on FOX affiliates.