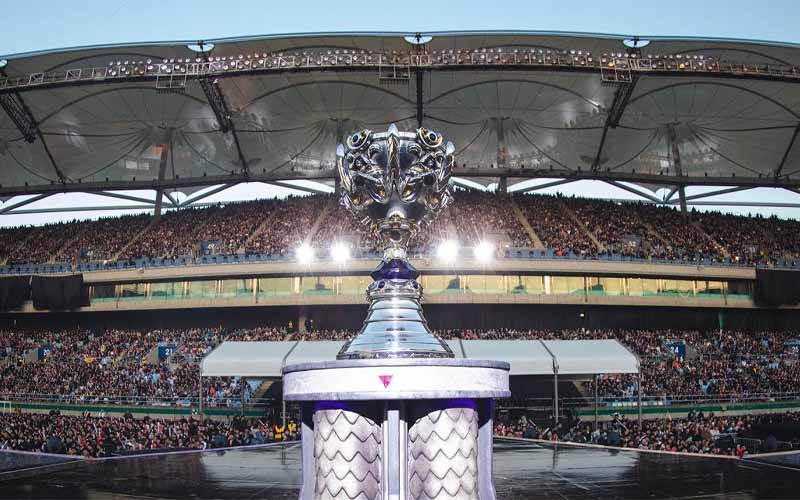 As competitive gaming continues to grow in popularity, one online US sportsbook is now ready to get on the esports betting action.

FanDuel Sportsbook on Friday announced it is now accepting bets on the 2019 League of Legend World Championship Finals, becoming the first online and mobile app sportsbook to legally offer esports wagering in the United States.

We now offer lines on ESports 🎮

Place your bet for this weekend's LoL World Championship Finals at https://t.co/ODJppOKx19 pic.twitter.com/WvdpLWxx5V

LoL Worlds 2019 Finals betting odds and prop bets for Sunday’s matchup in Paris are already listed on the platform if you live in New Jersey. The FanDuel app in West Virginia, Indiana, and Pennsylvania does not currently have the option to wager on esports.

Currently, FanDuel has both Europe’s G2 Esports and China’s FunPlus Phoenix listed at -110 odds ($110 bet on either team would return $100 in profit), indicating there is a 50/50 chance of either team lifting the Summoner’s Cup.

The Finals winner will also take home the tournament’s top prize—37.5% of the prize pool, which will be no less than $2.225 million. 13.5% of the pool prize poll will go to the Finals runner-up.

League of Legends is by far the most popular esport in the world today, and its championship viewership numbers have already surpassed all major professional sports, with the NFL’s Super Bowl being the only exception.

Nearly 100 million viewers tuned in from around the world to watch Invictus Gaming’s win over Fnatic at the 2018 Finals, and many expect that record to be broken this weekend.

And the popularity of competitive gaming is not going to slow down anytime soon, especially after it was announced earlier this year that the 2024 Summer Olympics in Paris will include esports events.

In addition to FanDuel Sportsbook, betting on competitive esports tournaments and events is also available at all brick-and-mortar casinos and racetracks in New Jersey.

The Borgata Hotel Casino & Spa in Atlantic City, NJ accepted the first-ever legal wager on esports in the Garden State on Thursday. Today, all NJ sportsbooks have lines available.

With legalized sports betting rapidly spreading across the country, and the continued surge in popularity of esports over the past decade, it was only a matter of time before one of America’s most well-known sportsbooks entered the growing market.

“The total revenue for the global e-sports market was projected to eclipse the $1 billion mark in 2019, while the sports betting market just earlier this week was predicted to grow to $8 billion within the next five years,” according to a press release sent on behalf of FanDuel. “Both of these markets have changed the way people think of, and view, sports, and they are impressive in their own rights, but when you combine the two together that is when you get something truly special and that is what FanDuel has done today.”