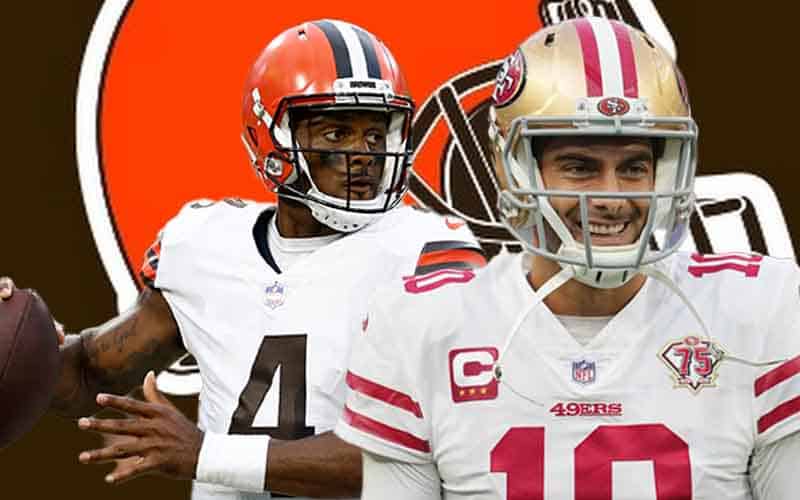 Deshaun Watson’s recent suspension of 6 games has been raised to 11 after a settlement was reached yesterday between the NFL and the NFLPA. Watson must now pay a $5 million fine in addition to missing 11 games without pay.

The suspension will last through November 28th, allowing Watson to return in time to face his old team, the Houston Texans, in Week 13.

QB Jacoby Brissett will start in Watson’s place unless the Browns sign a free agent between now and the start of the 2022-23 NFL season. Brissett spent time with the Miami Dolphins last year, going 2-3 over his 5 starts in support of Tua Tagovailoa.

Rumors have leaked that Cleveland is interested in acquiring Jimmy Garoppolo from the San Francisco 49ers. The move would give the Browns a shot at the postseason this year, but Jimmy G could opt out due to Watson’s pending return.

The Seattle Seahawks would be a good landing spot for Garroppolo, but that would almost certainly require him being cut by the 49ers as they are unlikely to trade him to a division rival.

NFL betting sites are currently projecting that the Browns finish 3rd in the AFC North while the Seattle Seahawks are predicted to place last in the NFC West.

Jimmy Garoppolo’s insertion into either Cleveland or Seattle’s lineup would definitely improve their prospects for 2022-23, but only the Seahawks make sense with Watson returning at the end of November.

The first four games on Cleveland’s 2022-23 schedule are incredibly winnable. The road gets plenty tougher after that, but the Browns could have a shot at the playoffs if they are hovering around .500 when Watson returns.

With Watson under center, the Browns should have a shot at winning all of their remaining six games, but four of them are on the road.

NFL prop bets regarding the Cleveland Browns’ playoff fate have either been locked or removed from the boards completely, but we did find the following odds at BetOnline.

The Browns’ odds for betting on the NFL Playoffs are very close to even, despite the news of Watson’s heightened suspension. The same cannot be said for the Seahawks and their postseason hopes.

$1 wagers placed on an outcome of “yes” in the above NFL Playoff prop bet for Seattle will reward net profits of $4.50 if they are among the final 7 teams in the NFC this year.

While those long odds are appropriate at the moment, they will shift toward even if and when they acquire Jimmy Garroppolo. NFL betting is all about risk, and the odds tend to reward better the further out a prediction is made.

That said, make your call right now if you intend to max out your winnings by betting on the Cleveland Browns or the Seattle Seahawks to make the playoffs.