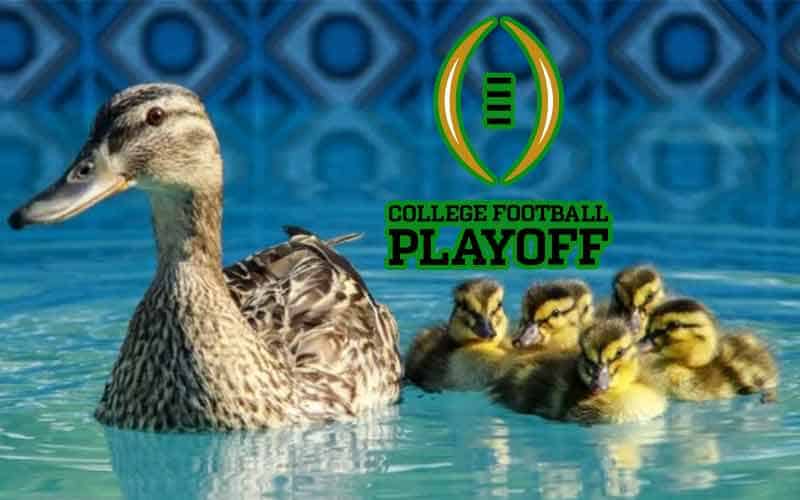 The first batch of 2021-22 CFP rankings have been unveiled by the Selection Committee and the Oregon Ducks have claimed the #4 spot. Conventional wisdom would suggest that the Ducks could simply win their remaining games and become a sure bet for the College Football Playoffs, but there’s still a lot that can “fowl” up their National Title chances between now and January.

Although Oregon is ranked fourth overall and would be included in the postseason if the season ended today, their moneyline of +5000 at online college football betting sites suggests they don’t have much of a chance at all.

Why Are The Ducks Ranked So High?

If the College Football Playoffs Selection Committee considers the Ohio State Buckeyes to be one of the top programs in the country, then why shouldn’t Oregon get credit for beating them?

Of the seven years that the College Football Playoffs have been the determining factor for the NCAAF National Champion, Ohio State has been included four times.

In the very first season in which the CFP was in play, it was Ohio State who won the title by defeating Oregon by a final score of 42-20, doing so as the 4 seed.

How Can Oregon Stay In The CFP Hunt?

Under no circumstances can Oregon suffer another loss. They must win all remaining games on the schedule and then defeat their opponent in the Pac-12 Championship Game on December 3rd.

Oregon’s destiny is also riding on the efforts of Ohio State who still needs to beat the Michigan State Spartans and the Michigan Wolverines. If the Buckeyes can make it through that gauntlet unscathed, they’ll still need to win the Big Ten Title against the Western Division champs who will most likely be the Minnesota Golden Gophers.

What Can Spoil It For Oregon?

As mentioned before, another loss would certainly exclude the Ducks from the College Football Playoffs in 2021-22. Their current resume is bolstered by beating Ohio State, and thus, a blunder by the Buckeyes could cause Oregon’s CFP ranking to plummet below the fourth spot.

When Ohio State wins the Big Ten, the CFP Selection Committee needs to be convinced that the Buckeyes were head and shoulders above the rest of the pack.

If Michigan State finishes with a single loss to OSU in a closely contested game, that could spell doom for the Ducks if the Committee is sympathetic to the Spartans.

It should come as no surprise that the SEC is taking up the top two positions in the first batch of rankings released in 2021-22. The placement of Georgia and Alabama as the number one and two teams, respectively, could cause trouble for Oregon.

The Bulldogs and the Crimson Tide are also the top two teams in the odds to win the National Championship at CFP betting sites, and that will likely remain unchanged unless Alabama loses a second game this year.

If both the Bulldogs and Crimson Tide meet in the SEC Championship Game, an Alabama win will leave two top-ranked Southeastern Conference football programs with one loss on their record.

If Alabama does beat Georgia, then the SEC will most likely take up two of the top four seeds in the postseason bracket. It can be assumed that entrance to the CFP will also be granted to the winner of the Big Ten.

Will that final seed be given to the Oregon Ducks or will the Committee be tempted by an undefeated Oklahoma Sooners team that just won the Big 12 Championship? What if the Cincinnati Bearcats can finish the 2021-22 season undefeated?

If you want to bet on the College Football National Championship Game, whether it is on Oregon or not, consider doing it now because once the season completes, odds for each team will not payout at the level they will at this moment.