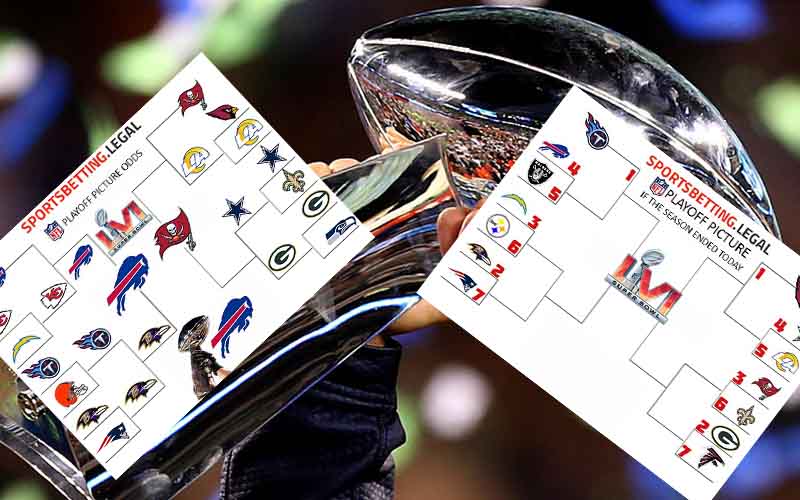 If the season were to conclude today, the Arizona Cardinals and the Tennessee Titans would possess the number one seeds in the NFL Playoffs, earning the postseason’s only bye weeks and forcing all teams to come through their home stadiums if they intend to reach Super Bowl 56.

When creating a potential bracket out of the odds posted at NFL Playoff betting sites, the final 14 teams and their seeding do not align with the current standings.

That’s largely because oddsmakers project for the future, and are not merely replicating what is already known today. Each team’s performance thus far in the season is a major factor in how pro football sportsbooks set the odds, but many other elements are involved in predicting the fate of an entire league.

The NFL Playoff picture odds and the resulting bracket suggests that the Buffalo Bills and the Tampa Bay Buccaneers are the teams to beat this year in each Conference.

Although neither is currently the top seed, in reality, Tampa’s recent playoff success as well as Tom Brady being their starting quarterback has a lot to do with the Bucs current odds.

The Buffalo Bills are more of a mystery, however. Although they made it to the AFC Championship Game last season and seem angled for continued success, they’ve somehow taken a step back this year and are now only a half-game ahead of the New England Patriots in the division.

Our staff is somewhat surprised that the NFL futures odds still favor the Bill so heavily to reach and win Super Bowl 56 considering their Week 9 effort that saw them drop a game to the Jacksonville Jaguars who are easily one of the worst teams in the league.

The NFL is a league of matchups. One lopsided head-to-head positional battle can change the entire makeup of a given game and is a big reason as to why the league features so much parity.

Still, it’s the Jaguars, so there are signs of trouble in Buffalo, even though their other two losses were to current playoff contenders. Is it time to hit the panic button in northern New York?

NFL betting sites are suggesting that they’ve still got what it takes to go all the way and win it, so perhaps true believers should buy low on the Bills now while their Super Bowl 56 odds are paying out at 6-to-1.

Betting on the Tampa Bay Buccaneers to win back-to-back Super Bowls would seem like an unlikely scenario, but the current odds are implying just that since this latest dip in performance by the Bills.

Because these Super Bowl LVI odds won’t payout until after February 13, 2022, the moneylines are still well above even for all NFL teams and will deliver significant cash winnings to bettors brave enough to lay some action now.

Cruise on by Bovada and see for yourself, but don’t wait too long because another week in the books could lower the odds on your favorite franchise.