Betting The Ohio State Buckeyes vs. Michigan Wolverines Odds – Who Will Make The CFP? 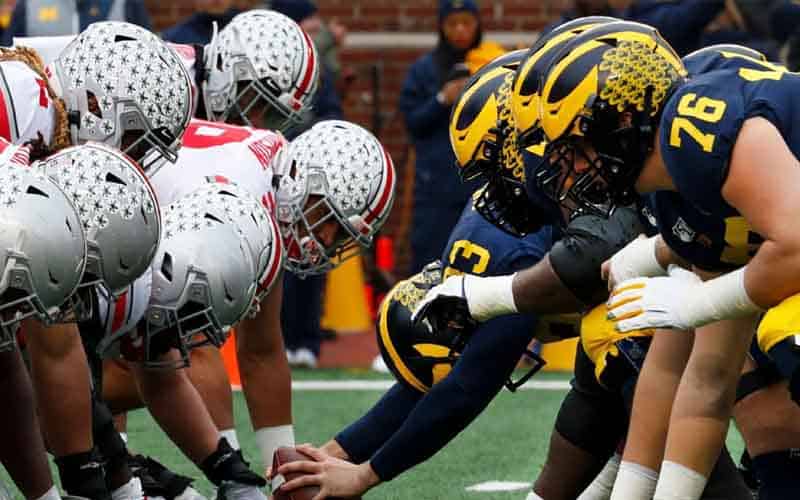 College football’s rivalry weekend starts today, but most NCAAF fans and bettors are focused on tomorrow’s matchup between the Ohio State Buckeyes and Michigan Wolverines, where CFP seedings are at stake.

Unfortunately for the Big Ten Conference, both Michigan and Ohio State are members of the Eastern Division, meaning that they can’t meet up for the Championship Game on December 3rd.

The winner between the Wolverines and Buckeyes will advance to the Big Ten Championship Game, where their opponent will be either the Purdue Boilermakers or the Iowa State Hawkeyes, depending on the result of their final regular season contests.

Legal college football betting sites are favoring Ohio State by just over a touchdown at home in what is projected to be a high-scoring affair.

The current College Football Playoffs top 25 ranks the Wolverines 3rd and the Buckeyes 2nd, but there is a chance that both the winner and loser of tomorrow’s game could be included in the final CFP bracket.

The winner between Michigan and OSU will most likely have an easy time taking care of their Big Ten Championship opponent and moving on to the CFP Playoffs.

The loser will finish the 2022-23 NCAAF regular season with a single loss to a top-four team, granting them a solid shot at a CFP seed if everything plays out perfectly.

The current odds for betting on the College Football Playoffs mirror the CFP rankings for spots 1 through 4. This indicates that it will be tough sledding for any teams outside the top four to compete for a national championship this December and January.

A one-loss Clemson Tigers team does not seem like much of a threat to usurp Michigan or Ohio State, even with an ACC Championship in hand.

The situation will become complicated if the LSU Tigers manage to beat the Georgia Bulldogs in the SEC Championship Game, as the winner of the Southeastern Conference has been included in the College Football Playoffs since its inception in 2014.

If LSU is granted entry into the CFP with 2-losses, then a 1-loss Georgia team will almost certainly be one of the final four programs included in the playoffs.

That will create some strain on the CFP Selection Committee when they render their final decisions on December 4th following the conclusion of the Conference Championship Games around the country.

The reason? The Texas Christian University (TCU) Horned Frogs are poised to finish the year as the Big 12 Champions, sporting an undefeated record.

Sure, TCU doesn’t have a big win over a team from another Power 5 Conference, but they’ve beaten who was in front of them, and that was enough for the Committee to grant a CFP seed to the Cincinnati Bearcats (Conference USA) last year.

There is usually an upset or two toward the end of the season that magically sorts out the final CFP rankings, but if not, there could be a logjam at the top with some good teams left out in the cold.