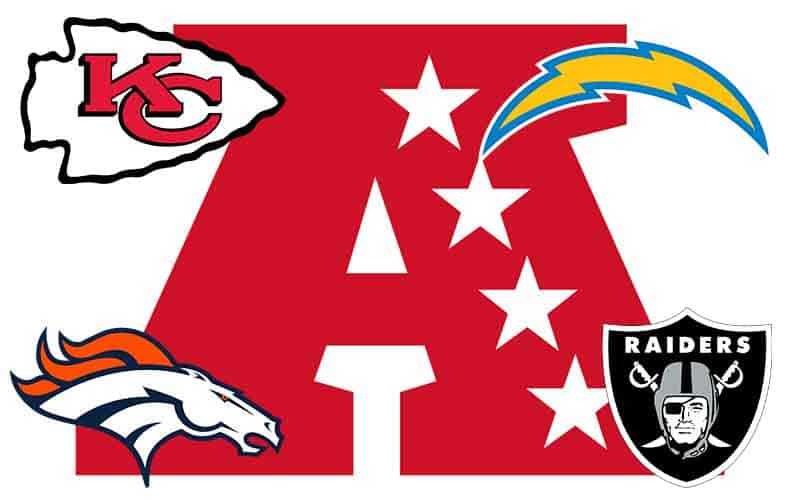 The AFC West is made up of four potential NFL Playoff qualifiers and will threaten to become the first division in league history to send three Wild Cards in the postseason.

The below NFL futures odds for the AFC West Division are presented in the following order – Bovada, MyBookie, and BetUS.

While the loss of WR Tyreek Hill will certainly impact the Kansas City Chiefs’ ability to separate from their opponents on the scoreboard, the continued presence of Patrick Mahomes under center gives NFL oddsmakers confidence that they’ll remain atop the AFC West for at least one more season.

Betting on the Kansas City Chiefs to win the AFC West will still deliver more profit than what pro football gamblers will need to risk no matter where the action is laid. Their +175 odds at Bovada will deliver the best payouts at the moment.

The Chargers have added Khalil Mack on the opposite side of Joey Bosa, creating the best edge rushing duo on paper in the history of the game.  LA’s offensive unit returns in top form for 2022-23, led by Justin Herbert, Keenan Allen, and Austin Ekeler.

The +250 moneyline on the Chargers to win the AFC West at BetUS is the highest on the boards right now. While this may seem like an attractive bet at the moment, we still view LA as too risky to lay any action on right now.

Even though they possess one of the most loaded rosters in the league, Los Angeles continues to disappoint bettors and fans. Don’t be lured in by this fool’s wager.

Fans of the Denver Broncos are hopeful that the addition of quarterback Russell Wilson will provide the stability their offense has needed in order to secure a trip to the postseason.

Betting on the NFL Playoffs can be done in the preseason by wagering on conference, division, and Super Bowl futures. Placing a bet so far in advance usually means that the odds for all teams will be listed in the positive.

That’s the case for the Broncos right now, and they’re our official sleeper pick in the AFC West to make a surprise run deep into the playoffs. Be the first on your block to go all in on the Broncos in 2022-23!

The Raiders are also clinging pretty close to even, despite being the fourth overall ranked team in the AFC West futures. Their current odds do not grant them a great chance of winning the division, but they’ve got a decent shot at securing a Wild Card position this year.

Current Super Bowl betting futures have the Raiders ranking 9th overall in the AFC. Las Vegas has added All-Pro wide receiver Davante Adams, from the Green Bay Packers, so their offense should receive a significant uptick in production.

The franchise that wins the AFC West this season is projected to win the conference and earn a trip to Super Bowl LVII according to the above NFL prop bet. These odds will pull toward even as the season progresses, so get in now to secure the highest profits.