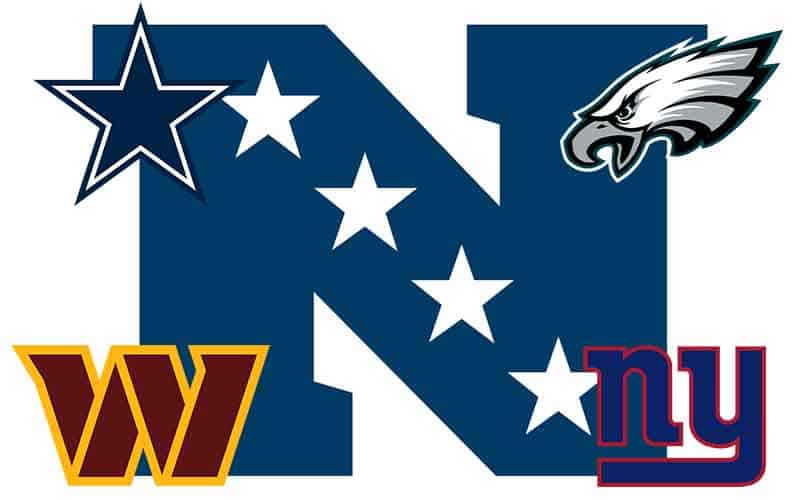 The NFC East once again appears to be a two-horse race as the Dallas Cowboys and Philadelphia Eagles once again top the NFL betting futures for winning the division in 2022-23.

Do the Washington Commanders or New York Giants have a shot at rising out of the NFC East basement this year and making a deep run in the playoffs? We’ve compiled the NFC East future odds from Bovada, BetOnline, MyBookie, and BetUS, and have presented them in that order for reference.

The Cowboys won the NFC East last season, and they are positioned to do so again this year based on the current futures odds on the board. Betting on the Dallas Cowboys to win the NFC East Division will earn gamblers more money than they will need to risk, with the best odds on the board available at Bovada (+140).

Despite losing WR Amari Cooper to the Cleveland Browns in the offseason, their nucleus of young talent on both sides of the ball significantly outclasses the remainder of the division. With that said, why are the Philadelphia Eagles projected within a few moneyline points of the Cowboys?

It is likely due to a healthy dose of skepticism based on lofty expectations that are often heaped upon the Cowboys that they seemingly never achieve.

The Eagles enter this season with Jalen Hurts under center, and while he has shown flashes of brilliance in the past, it remains to be seen as to whether he has what it takes to carry them beyond the Wild Card round of the NFL Playoffs.

That said, this same Eagles squad was able to qualify for the postseason last year after finishing with a record of 9-8. Expect a similar finish within a win or two, but an NFC East title is unlikely.

Head coach Ron Rivera has been given another season to get the newly-named Commanders over the hump and back into the playoffs after a one-year absence. Their moneyline odds at legal NFL betting sites are identical across the board for the Commanders at +500.

Adding Carson Wentz at quarterback and the return of defensive standout Chase Young could serve to propel the Commanders to the top of the pack, and they represent our best sleeper pick for winning the division this season.

The Giants have also been busy this offseason. New York is hopeful that RB Saquan Barkley returns at 100% health and can play all 17 games. If QB Daniel Jones doesn’t significantly improve his play in 2022-23, it will likely be his last campaign with the team.

NY does have the potential to sneak up on the league this year as their two first-round draft picks, edge rusher Kayvon Thibodeaux and offensive tackle Evan Neal should bolster both units.

Bovada and MyBookie have posted the most profitable odds on the board for the Giants to win the NFC East at +800.

The NFC East was able to produce a Wild Card qualifier last season, but the odds are slim for that same outcome in 2022-23. The following two NFL prop bets offer gamblers the opportunity to lay some action on the fate of the Cowboys and Eagles by predicting how far each will make it before being sent home for good.