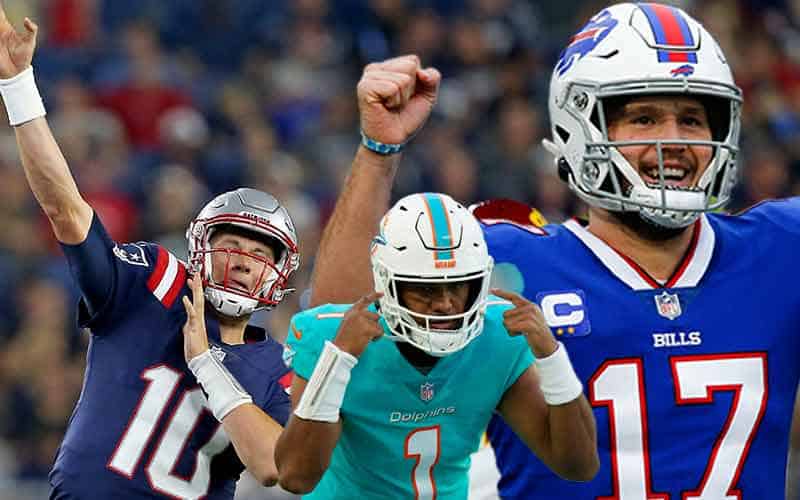 Although the Miami Dolphins and the New England Patriots have made improvements to their rosters in the offseason and are expected to do as well or better than last year entering their 2020-21 campaigns, neither is predicted to contend with Josh Allen and the Buffalo Bills.

The 2020-21 AFC North champions are favored at our top three online sports betting sites to win the Division this year, and their closest competition in the NFL moneyline odds are the Miami Dolphins at Bovada with a separation of 485 points.

Not only are the Bills predicted to win the AFC East, they are also highly favored in the odds for betting on Super Bowl 56. They are currently the overall second-ranked NFL team in the NFL futures for SB LVI, indicating that they’ll make a return trip to the AFC Championship Game in 2022.

The addition of wide receiver Stephon Diggs last season ignited the Buffalo offense, creating a lethal combination with Allen that kept defenses guessing and the points accumulating on the scoreboard.

Diggs and Allen were named the number 11 and 10 overall players in the league, respectively, according to a recent poll of NFL athletes, and we expect this potent duo to continue trending upward. The Bills’ top four NFL Draft picks went toward their defensive and offensive lines, so their already stout core should be enhanced further.

2021-22 Prediction: The Bills Will Impose Their Will And Win The AFC East

While we must commend the rookie selections of the Buffalo Bills, the New England Patriots may have received the steal of the entire NFL Draft when they picked Mac Jones, quarterback out of the University of Alabama. Jones had been expected to go as high as third overall to the San Francisco 49ers, but when they selected Trey Lance, the Crimson Tide QB fell all the way to 15.

Cam Newton has been re-signed and is competing with Jones for the starting gig, but “Big Mac” may now have the edge. Newton was forced to miss several days of practice this week due to the NFL’s COVID-19 protocols, and Jones’ time with the starting offense grants him more potential of becoming the Week 1 starter. That call has yet to be made by head coach Bill Belichick.

Our staff expects New England to play hard under Belichick and potentially improve on last season’s record of 7-9, but we don’t believe they’ve got a legit shot at an AFC East title. Gamblers that want to bet on the Patriots to win the AFC East should do so at Bovada as they have the highest moneyline at +350.

Miami surprised many when their hard play under head coach Brian Flores rewarded the Dolphins with a 10-6 record in 2021-22, although they did not qualify for the postseason. Second-year quarterback Tua Tagovailoa looks to improve on his moderate efforts during his rookie season, and now that veteran QB Ryan Fitzpatrick has departed for the Washington Football Team, he is now the unquestioned leader.

The Dolphins overachieved last season, and this year we expect a similar record of 10-7 or so, but with them fielding a much more formidable team. If Tua surprises us with exponential growth in his play, then there is the chance for the Dolphins to rise well above our predictions, but we’ve yet to see Tagovailoa get comfortable passing the ball downfield beyond 20 yards.

All three of our top online NFL sportsbooks feature Miami and New England close together in the moneylines, but if you intend to bet on the Dolphins to win the AFC East, BetOnline and their +350 odds offer the best payout.

When trading QB Sam Darnold to the Carolina Panthers in the offseason, the New York Jets sent a clear message to fans and NFL bettors that they are rebuilding. We can’t blame them. Moving Darnold was a great idea and kudos to the Jets for finding a suitor, but the fact remains, their roster is now devoid of any legitimate, game-winning talent.

It is what it is. The New York Jets are trying to establish a new identity with a fresh batch of players. That’s probably the right move for the franchise at this time. The wrong move would be for bettors to consider laying any action on the Jets’ odds to win the AFC East this year.

If insistent upon betting on the Jets AFC East odds in 2021-22, MyBookie and Bovada have the exact same moneyline of +2000 that will payout at 20-to-1.

2021-22 Prediction: Rebuilding Year – Too Volatile To Wager On